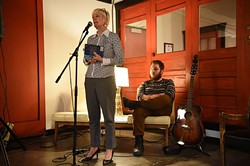 In a time when civil rights are so hotly discussed, How We Sleep at Night: A Mother’s Memoir takes readers on a road trip of self-exploration. It is a snapshot of the life of Oklahoma City native Sara Cunningham during a time in her life when her beliefs about the Christian church and the gay community were incongruous.

Cunningham’s writing allows the reader to climb inside her head and experience her emotions when confronted with the dissonance of her love for her son, her confusion with a religion that condemns her son for his sexual orientation and her resulting depression. Throughout the book, she mixes in anecdotes, Bible verses and lyrics to songs that her son, Parker, wrote to illustrate the many opinions she has received on the topic.

Her journey from critic to ally gives her a unique perspective on the LGBTQ community.

“I’m so glad to be on this side of this story,” Cunningham said.

As deplorable as the message of Westboro Baptist Church may be, the group’s far-reaching media presence has motivated a generation to reexamine its beliefs and extend a dialogue about the issue to its peers. In the book, Cunningham writes that the Westboro group has “stirred a generation to stand in love and in favor of the gay community.”

Often, the rainbow is associated with the LGBTQ community as a symbol of gay pride, but it was first a symbol of promise in the Bible.

In Genesis 9:12, God says, “This (rainbow) is the sign of the covenant I am making between me you and every living creature with you, a covenant for all generations to come.” Cunningham writes in her book about her realization that God made this promise to all people, including gay people, for all of time.

How We Sleep at Night made me proud to be a part of a generation that is resolving to stand up for equality for gender and sexual minorities in the church.

Cunningham believes that communication between the church and the gay community is the most important way we can encourage compassion to prosper.

“As a Christian, to anyone in the gay community who has been hurt by the church, I would like to offer a straight apology,” Cunningham said.

She wrote How We Sleep at Night as a resource for other parents because she lacked such resources during her journey becoming “a Christian parent who is affirming of her gay child.”

Print headline: Sound sleep, A new book examines a parental journey of coming to terms with a child’s sexual orientation and a religion that has condemned him for it.

Cunningham gives the following pieces of advice to anyone going through a similar situation:

4.      Don’t cut all your hair off and go natural after being bleach blonde your entire life.

5.      Surround yourself with people who can speak love and grace to you and your children. Be patient with those who don’t.

She spent a year writing her book, which came out in November through CreateSpace. She has sold about 300 paperbacks and given away almost as many.

How We Sleep at Night is available for purchase for $12.10 on Amazon. To learn more about Cunningham’s story, visit facebook.com/howwesleepatnight.