Booze and brews #3: Voters await opportunity to have their say on Oklahoma’s historically restrictive liquor laws 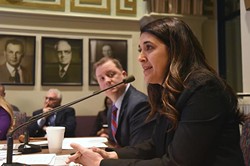 Editor’s note: Booze and brews is an Oklahoma Gazette series examining our state’s beer and liquor laws. This story is part three of three. Learn more online at okgazette.com.

There aren’t any good old days for alcohol in Oklahoma.

The state’s prohibition history is long and storied, which makes the possibility of real change even more enticing.

Senate Joint Resolution 68 (SJR 68), authored by Sen. Clark Jolley and Rep. Glen Mulready, recently passed out of the Senate and awaits the House of Representatives’ rules committee. SJR 68 would put proposed changes to the Oklahoma Constitution’s alcohol laws to a vote of the people.

Senate Bill 383 (SB 383) by Sen. Stephanie Bice is still being written and revised, but it would provide the legal framework for new alcohol laws. And a pair of dueling initiative petitions push to ensure government gridlock doesn’t inhibit voters from deciding whether change is needed.

But to understand where we’re going, it helps to know where we’ve been.

“Oklahoma residents were in the moonshine business well before statehood,” said Joe Daniels, ABLE special agent. “Prior to becoming a state, Indian Territory was designated as ‘dry’ to protect the Native American population from the evils of alcohol, but this just made a market for the product as illegal traders in the area made moonshine commonplace.”

When Oklahoma became a state in 1907, it remained dry, so the moonshine business stayed booming. After nationwide prohibition was repealed in 1933 with the ratification of the 21st Amendment to the U.S. Constitution, not much changed.

Oklahoma never ratified the 21st Amendment, but most other states did. Instead, the Oklahoma Legislature approved a beer referendum in 1933 allowing 3.2 percent ABV, or alcohol by volume, beer.

“Only the push to bring legal liquor into the state in 1959 caused a major enforcement crackdown on the moonshiners’ and bootleggers’ activity, who were working somewhat openly across the state,” Daniels said.

It would be 26 years — 1959 — before it was legal to make and sell alcohol in Oklahoma, and even then, it was only in liquor stores.

Jump forward another quarter century to 1984. That’s when Oklahomans voted to allow liquor by the drink in restaurants and bars on a county-by-county basis.

The last 32 years have seen a literal and figurative seismic shift in the state. On social media and in letters to the editor, residents share concerns and wishes for changes to Oklahoma’s liquor laws.

“Is anyone looking out for the consumer? Oklahoma law presently allows ‘public’ consumption of 3.2 beer in parks, tailgate parties, festivals, etc.,” he wrote. “But strong beer must be consumed in private or in an ABLE-licensed facility, in some cases limited to over age 21. If 3.2 beer disappears, will consumption of beer in a public park or a tailgate party become a criminal offense? Will festivals be required to segregate beer drinkers from under age 21?”

“I cannot answer that, as SJR 68 wording has not been finalized and no amendments to SB 383 have been filed to date,” he explained.

Current laws still prohibit drinking strong beer in public places, and Title 37 has licensing mechanisms in place for serving alcohol at street festivals, but all that could change as proposed legislation moves forward.

“There’s some stuff I just can’t find in stores here,” he wrote.

Lindsay Thomas, Audrey Dodgen and Jenny Heinrichs shared that they want to buy wine in a grocery store on Sundays.

“I want to buy wine where I buy the rest of the stuff I need for dinner, and I want it on Sunday,” Dodgen said.

Cold beverages should be available every day of the week, said Rhiannon Mako.

“Because sometimes I want a chilled bottle of Moscato as a dessert on a Sunday,” she said.

November might seem far away for voters eager to modernize the state’s liquor laws, but what’s a few more months after suffering through more than a century of restrictions?

1907: Oklahoma’s Constitution is written to include prohibition. Moonshining continued as it did since before statehood.

1933: The 21st Amendment, ending Prohibition, was added to the U.S. Constitution. Oklahoma did not ratify it but approved a referendum allowing 3.2 ABV beer.

1959: Oklahomans repealed prohibition and established an Alcohol Control Board. The legislation allowed retail sales in package stores, but not liquor by the drink in restaurants and bars.

1984: Article 28 of the Oklahoma Constitution was passed, creating the Alcoholic Beverage Laws Enforcement Commission and allowing counties to decide on liquor-by-the-drink sales.