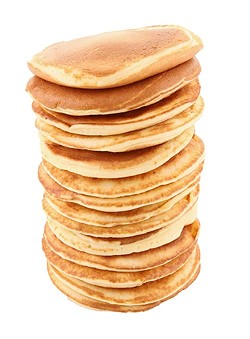 It’s not unusual to stop at an all-night pancake house to soak up all the liquor before heading home after a night of alcoholic cavorting. For many of us, after the bite of that last flapjack, that’s where it stops.

But not for Tom Kirlin.

Those after-hours pit stops at IHOP growing up in Tucson, Arizona, always stayed with Kirlin. Working as a cameraman in Los Angeles for ten years and unhappy with the scene, he opened up his own studio. In a last-ditch bid to keep it running, he remembered the syrup-drenched memories of his youth and created Pancakes and Booze.

What started as a catchy show in that studio has blown up nationally, with events now held in more than 25 cities, including a triumphant return gig to Oklahoma City on Friday. Pulling from the local art scene, Pancakes and Booze is a group art showcase that will prominently feature anywhere from 50 to 150 local artists loudly and proudly presenting their work, no matter what format.

There will also be live music, body-painting, booze and, of course, an all-you-can-eat pancake buffet, all for only $5. (“Not even IHOP serves pancakes this cheap!” its Facebook page jokes.)

“Pancakes and Booze fills a void for artists out there who are really talented [but] haven’t found their way into the gallery system yet,” Kirlin said. “A lot of people don’t like going to a stuffy wine-and-cheese gallery event; they want to have fun and be a part of a less pretentious crew. And that’s exactly what Pancakes and Booze is, a really friendly, fun environment to be around and be a part of, and people recognize that and come back.”

“We had a great turnout for the very first one,” Kirlin said. “Usually, when we’re new to a city, it takes a show or two for people to see what we’re doing and to hear about us to come check it out. But the very first one was awesome … several hundred people saw it. It’ll only continue to grow this year.”

One of the reasons Pancakes and Booze might appeal to local artists is the wide-ranging acceptance of numerous forms, including painting, mixed media, photography, sculpture, drawings and graffiti. 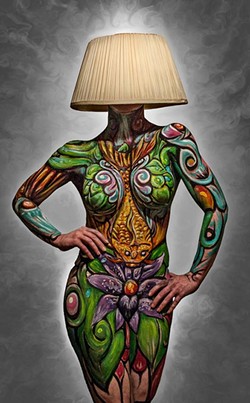 It’s definitely one of the reasons that Moore-based body-paint artist Bryan Crump keeps coming out, mostly due to the fact that body painting is popular at the events.

“The work I do is more mobile than some traditional arts,” Crump said. “I am a bit of a performing artist, you might say. I call myself a transformational specialist … Last year, we painted in secret, but this year, we will be painting models live on stage.”

In addition to having his work viewed by a wide base of patrons, Crump also feels that Pancakes and Booze is different than other shows because of the emphasis on networking with other artists always intent on learning and improving their own craft.

“I think events like this help local artists reach the local market with a unique and fun event but also get to meet people that travel the country doing shows,” Crump said. “[Kirlin] works hard to bring local communities of artists together for this … he brings a fun outside perspective to the arts and another great venue for artists to share their work and meet potential new clients and collectors. So many talented people were at the last one, and I made several new friends.”

With final preparations for this upcoming event still being made, artwork is still being accepted for the show and can be submitted via pancakesandbooze.com. Local bands and DJs are also being sought out and can apply at the same address.

Kirlin agreed with Crump that the show is the perfect place for artists to come together in a way that’s harder to do at most other exhibitions. But even more than that, he believes it’s a great place for guests to find their next new favorite local artist.

“You can have more people in one night see your artwork than at a gallery over the course of an entire month. We don’t take commissions on sales, and it’s a great networking event,” Kirlin said. “A lot of the artists that were showcasing are either new to the art scene, new to the city or are just fairly young people who are just coming into their own as an artists. It’s just a great place to show your artwork because nobody’s judging.”