Born to be Blue

Berlin Green The Blue Note sign has been restored and returned to the building.

When the Blue Note shuttered unexpectedly last October, just a few days after new owner Chris Simon took control, no one realized quite how different Oklahoma City would look by the time they were ready to open the doors again.

For years, maybe even decades, the Blue Note, 2408 N. Robinson Ave., was the city’s premiere destination for catching cheap drink specials alongside the barely-controlled chaos of the underground punk and metal scenes. The place wore the smoke in its rafters, the spilled drinks on its floors, and the countless years of ripped posters and stickers along its walls all like badges of honor, a grizzled, veteran character actor down the street from Tower Theatre and Ponyboy’s more refined, “ready-for-primetime” aesthetic.

But even in just the handful of months since going dark for some deep, major renovations under the new ownership, the city has changed. 89th Street has given the punk community a firm home. The Sanctuary has launched with an eye on the metal and hardcore scenes. Beer City has already started changing the entire scope and scale of what the OKC music world can be.

And of course, we lost the Hi-Lo Club, that legendary queen of the dives. It was Simon’s first baby and the countercultural hub for much of the community that sustained rooms like the Note in Oklahoma City.

Relaunching Blue Note straight into this city’s current identity crisis, and right at the outset of the wild summer season, will be no easy task, but Simon is confident in his vision of a simple, welcoming bar and venue where cultures can mingle without pretense.

“I really want to mix up the genre of this place,” he said. “I don’t want to pigeonhole it one way or another.” 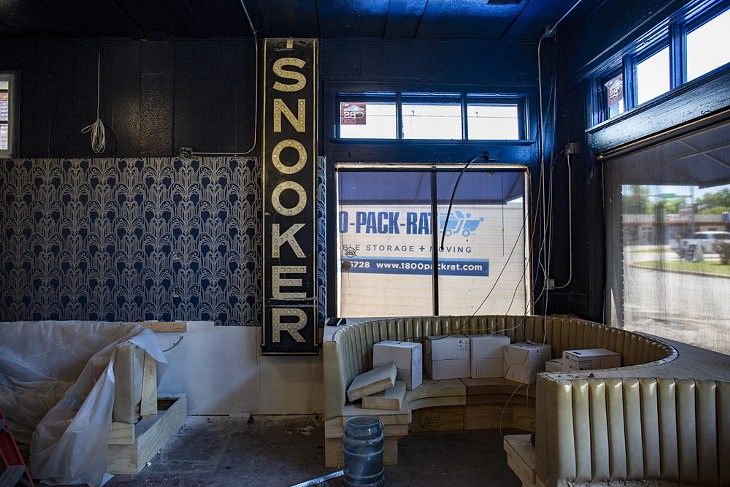 The Blue Note’s exterior has plenty of fresh paint, and a beautiful new neon up top to welcome guests, but the renovations inside have been extensive.

The goal, however, is for it to still be recognizable and comfortable to patrons past.

“The main room hasn’t changed too much,” Simon said. “We’re doing a whole series of booths around the wall. There’s some wallpaper and painting the ceiling a dark blue. We rebuilt the stage and we’re running it about six feet out. There’s space in the back for storage now, which we didn’t have before.”

All of these new features and considerations are obvious and clear, but the layout hasn’t changed. The bar is still in the same place (and is actually altogether the same bar, albeit cleaned pretty heavily). Simon even made sure to keep the slants and orientation of the ceiling the same just to retain the spirit.

Most importantly, the stage is intact.

For all of the new wood, new concrete, new everything, they’ve seen fit to truly retain the minor local legend that is the Blue Note stage.

“We rebuilt the stage with the same lumber,” Simon said. “We just took it apart and rebuilt it, but we built it back a little bit stronger.”

All of these renovations — and the constantly inflating costs and time requirements that come with them — are integral to Simon’s vision of protecting the space’s viability going forward and dragging this historic venue into the increasingly saturated new millennium.

“I’m just trying to make it better,” he said. “I’m trying to give it another thirty years of life.”

Anchored to the stage

The key to everything, it seems, is still the music.

Though Simon and co-owner Jerry Redd are quick to reiterate that there likely won’t be shows every night of the week, and that the space is being designed and considered with at least a touch of casual bar culture in mind, they said that their intention is to keep the focus on Blue Note as a venue first.

“We want this place anchored to the stage,” Redd said. “We want it to be relevant to 23rd Street and to Oklahoma City, a place where musicians want to come and play here and people want to come and see music here.”

It’s clear from every conversation that to realize that goal, the new operators intend to dramatically widen the Note’s scope.

“If there’s really any quote you can take from me on how we’re approaching music, it’s simply that we are going to give a shit. That’s what we want. Whether it’s the blues and jazz that we’re trying to get back in here, or whether it’s rap, punk, doom, psych, metal, country, rockabilly, we just want to give a shit about the bands and the music,” Redd said.

Both Redd and Simon openly sing the praises of music booker and pre-renovation holdover Jon Jackson, whose excitement and dedication to fostering a tighter music community for OKC through the Note, they say, will be one of their greatest resources.

“We’re not going to be everything to everybody,” Redd says, “but we want to bring as much different good music into the place as we can.”

A piece for the ages

With Simon at the helm, it’s easy to wonder if the Blue Note is being set up to fill the void left by the untimely demise of the beloved Hi-Lo Club, arguably the city’s nexus of all marginalized countercultures, in particular the LGBTQIA+ community that claimed the dive as its own so many years ago.

The quick and largely unexpected closure of the Hi-Lo, following hot on the heels of a major development group snatching up the Donnay Building, is still something of an open wound for Simon. He said he can’t speak too much about it, mainly because of potential legal proceedings, but he’s open about his hopes of that bar’s displaced community finding a new hotspot. That could be Blue Note or even his other bar, Lost Highway, which has had its own expansion effort partially stalled by the time and capital required to overhaul the Note and also by its impending expansion space currently being used to store everything he could salvage from Hi-Lo.

“It’s really going to be the people that come to the bar that make it what it is,” he said. “I’m just giving you the raw platform. It’ll be the people that come in here that want to do brunch, or that say, ‘Hey, here’s this show that would be really cool,’ or even ‘Here’s a piece of artwork I did of the Blue Note.’ And that becomes a piece for the ages.”

He’s already set on bring the kind of burlesque and drag shows that the Hi-Lo Club had become known for over to the new Note, and he even admits that some of the new 50s-era jazz lounge design had that partially in mind, but beyond that, Simon knows that a bar has to create its own legacy.

“Things like that happen organically,” he says. “Hi-Lo started with a little cult following and grew from there, and I anticipate this doing the same thing.”

For now, Simon isn’t looking too far into the future, keeping his focus on realizing his vision for what the Blue Note can be, not only for itself and the underground music fans waiting for the doors to reopen, but for this strange, changing city and its still uncertain future.

“My head is spinning,” he tells me. “I need to get this place open so I can breathe a little bit and figure out my next move.”