A Bronx Tale deviates from usual musical storylines and focuses on a young man caught between his father and the mob. 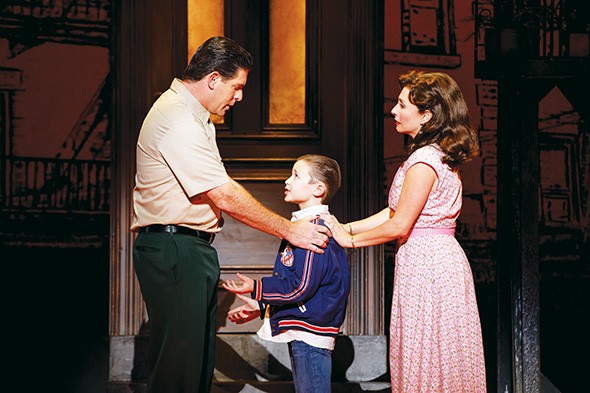 With roles in the musical stage productions of Saturday Night Fever, The Wedding Singer, Legally Blonde and, most recently, A Bronx Tale, actor Richard H. Blake has played several parts other actors made famous on the big screen. Now on a national tour following a 700-show Broadway run ending last year, A Bronx Tale: The Musical runs Tuesday-March 10 at Civic Center Music Hall, 201 N. Walker Ave. Blake, who is touring in the role of Lorenzo, which he played 2016-2018 on Broadway, said portraying a character audiences are already familiar with from a film requires him to find ways to incorporate elements of the original performance into his personal vision for the role.

“You have to acknowledge that film role,” Blake said. “You have to honor that a little bit. People are expecting that. People are comfortable with that, and you don’t want to make them uncomfortable or make them try and start over from scratch. But you also have to make it your own. So there’s that fine line of finding a way to give them a handful or some semblance of the version that they’re used to and comfortable with and also infuse that with your own take on the role and your own ‘truth,’ as we like to say.”

Playing Lorenzo in the Broadway production of A Bronx Tale required Blake to audition and later rehearse for a small but discerning audience who knew the role intimately, including the director, who not only directed the 1993 film adaptation but also played Lorenzo (and Travis Bickle and young Vito Corleone and Rupert Pupkin, et al.).

“Let’s not forget that that person is Robert De Niro, just one of our living legends, one of our icons of the industry,” Blake said of his director for the Broadway adaptation. “So it was definitely, on that first day, intimidating to walk into the room and go, ‘Oh god! I hope I don’t screw this up.’ Obviously, I had my work cut out for me because I’m playing a role that was made famous by a genius in the acting world, but the second we started working, honestly, they made us so comfortable. We had to trust that they cast us. They chose us, and they trusted us with this material. That right there sort of takes the pressure off.”

The story of a bus driver who struggles to keep his young son from falling under the influence of a powerful local mob boss in the 1960s, A Bronx Tale began off-Broadway in 1989 as a one-man show created by Chazz Palminteri, who also played the role of mobster Sonny in the film and wrote the screenplay and the book for the Broadway musical. Blake said he was most worried about Palminteri’s opinion of his portrayal of Lorenzo.

“What was more intimidating to me was the fact that I’m playing a real person,” Blake said. “This story is based on Chazz Palminteri’s life, and Chazz is, obviously, very much a part of this production. He was there every day in rehearsals from the very beginning, since workshops and everything, and you want to do justice to this person who was a real person to Chazz. I play his father, and he and his father were the best of friends. He loved him more than anything, so you want to honor that man. … Of all of [Palminteri’s] successes and all of the films and movies that he’s done over the years, this is his baby. This is the one that put him on the map, and also it’s the most dear to him because it’s his. It’s his life and his story.”

Palminteri revived his one-man show on Broadway for the 2007-2008 season, but Blake said the writer and actor originally envisioned it as a large stage production.

"This is a musical for guys who don’t ever go to the theater."—Richard H. Blake tweet this

“Chazz said he has always felt from when he first started that the best version of his story would be a musical,” Blake said. “He thinks of his story and the way that it is told as a fable, and fables work best with music.”

“The movie was dark,” Blake said. “The movie was gritty. Obviously, the musical version isn’t as dark, but this is real. These are tough guys. … I don’t think, in my opinion, that anything about the character should change because at the end of the day, you just want to be honest. You want to be honest to who this person is. In my case, he’s a father, a loving father who wants the best for his son, and he sees his son having this path that he’s going down and there’s a fork in the road to make two choices and he’s struggling to steer his son down the right path. … This is a dramatic role even though we’re in a musical. … The show doesn’t become campy just because we’re in a musical.”

By showing tough characters making tough decisions onstage, Blake said the show appeals to people who might not normally relate to Broadway productions.

“This is a musical for guys who don’t ever go to the theater,” he said. “This is the show you come see. We get so many people who have never seen a show before in their lives. This is the one they come to first because it’s not a usual show, and then they’re like, ‘Oh my god. This is great. I want to see more theater.’ That’s rewarding in itself.”

And in case you were wondering, Blake said he didn’t get much advice on singing and dancing from De Niro.

“He handled, mostly, the acting,” Blake said. “He’s all about authenticity. He’s all about the details. He was at my haircut, combing my hair, making sure that it was exactly right. The way you unfold a wad of cash. That’s the stuff that’s invaluable because I wasn’t growing up in the ’60s. I wasn’t around these people, even though I’m familiar with the culture. … He really just knows how to make it authentic. … All the little things will add up to make you actually feel like you’re in the 1960s.”

His attempts to authentically portray Palminteri’s father have also helped Blake in his offstage role as a father to his own son.

“Lorenzo, the character I play, is the kind of father I would aspire to be,” Blake said. “So I’ve tried to, as I inhabit him, I try to let him inhabit my life offstage. I’ve spent countless hours with Chazz, offstage, just talking and learning and hearing about his father and going over pictures and stories and going over his bus route, all those things. Just listening to Chazz talk about his father, the reverence he has for him informed me a lot about what kind of man he was. So I know if my son ever talks about me the way Chazz talks about his dad, I will have done the right thing.”