A contentious political season looms, but will it translate into higher voter turnout? 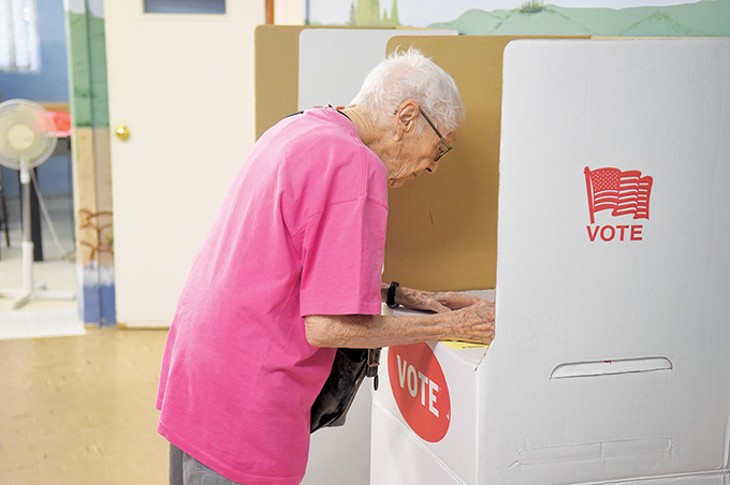 An August 2015 U.S. Census Bureau report on midterm state elections showed fewer Oklahomans participated in 2014 than in any statewide election over the previous 45 years. In Oklahoma, only 34.2 percent of adults cast a vote in the 2014 general election.

Several factors might have contributed to why voting was down that year. The Census Bureau asked nonvoters their reasons for not casting ballots, and answers ranged from schedule conflicts to illness and bad weather.

However, early signs point toward much higher turnout in 2018 with several key statewide offices opening up, including the governor’s seat, and a surge in activism sparked by a contentious legislative session and the nine-day teacher walkout in April.

The state Democratic Party believes conditions are right to make gains while state Republicans are battening down the hatches to defend their position.

Pam Pollard, chairman of the Oklahoma Republican Party, said the biggest difference between the state political climates in 2014 and now is a wide-open race for governor.

“It’s a competitive seat; it’s an open seat. It wasn’t competitive four years ago,” Pollard said. “It completely goes to the amount of competition.”

Aside from the state’s chief executive, 24 of the 48 state Senate seats and all 101 House seats are up for grabs. (Four Senate races and 13 House seats feature a candidate running without an opponent from either party.)

Anna Langthorn, chair of the Oklahoma Democratic Party, sees this year as a critical time in state politics.

“I think 2018 is going to be a turning point for Oklahoma. ... I think there is going to be enthusiasm not only in the primaries but in the general election in November,” she said.

The total number of registered voters tends to follow a predictable pattern of peaks and valleys, reaching a high point every four years for the presidential election and finding another smaller peak during gubernatorial elections. In odd-numbered years, the registered number of voters tends to drop as the Oklahoma State Election Board removes those who have moved, died or were designated inactive from its roster.

With those trends in mind, the present number of registrations seems to indicate fervent interest in this year’s political cycle. Election Board public information officer Bryan Dean said there are already about 17,000 more voters registered this year than there were four years ago in November.

There are currently 2,041,000 voters registered in the state of Oklahoma. That’s up from 2,016,000 registrations at the beginning of the year. June 1 is the voter registration deadline for the June 26 primaries.

Another indicator for higher turnout is a historic number of candidate filings. During the April filing period, 794 candidates filed for state and federal positions, which Dean said is the most in recent memory.

“That’s usually an indicator of a lot of interest,” Dean said. “With all the stuff going on with the teachers, there has been a lot of activism, and that seems to translate into an interest in state government.”

With a high number of currently registered voters that is only expected to climb leading into the general state election, Dean said it is “certainly a possibility” that voter turnout in 2018 could surpass the ’16 presidential election, but unlikely.

“It’s almost unheard-of for that to happen,” he said. “Presidential elections are always our highest in a four-year period.”

One issue that could be driving new voters in June is State Question 788, which would legalize marijuana for medicinal purposes in the state. Dean said while there clearly is a great amount of interest in the state question, a primary election still takes a backseat to generals when it comes to turnout.

Whether first-time voters eager to cast a ballot on SQ788 will return for the general election in November is still not known, but Dean would ideally like to see all primary voters return to exercise their constitutional right.

“What you hope and expect is that the enthusiasm you have will carry over,” he said.

Hanging on Pollard’s wall is a clipping from Tulsa World after the 2010 gubernatorial election in which Fallin defeated Democratic challenger Jari Askins. A big, bold headline reads, “Triumph of Turnout.”

Pollard led the state Republican Party’s get-out-the-vote effort in 2010 and hopes to use her extensive campaign-driving experience in this year’s election cycle.

“We have a very tried and true, very successful program,” Pollard said. “We’re going to continue with that same program every year.”

The state Republican Party is not leading any get-out-the-vote efforts until after winners emerge from the primaries, but Pollard said their efforts for the November election are sure to begin the very next day.

Every year is different, but she said the methodology for success is the same. She believes voters this year will be looking at the specific solutions a candidate is proposing over the person’s general ideals.

“I think what the voters are going to be looking for is someone with a plan,” she said, “someone with details on how we’re going to continue to fix and change Oklahoma.”

State Democrats are boosting their ground game in 2018, hiring a full-time field manager for the first time in several election cycles.

“That’s a big change for us,” Langthorn said. “We haven’t had that in many years, and I think it’ll have a huge impact on our elections.”

The field manager will work with local and county party volunteers and candidates in hopes of turning out voters across the state. Langthorn said a big area of emphasis is reaching out to potential voters in minority and marginalized communities.

“Frequently, voters from marginalized communities are less likely to vote because, frankly, they have less opportunity to do so,” she said. “They often work less flexible jobs and have less education about the process and system.”

Pollard said the onus is on the state Republican Party to demonstrate how their policies have been effective over the last decade.

“We need to show all the successful programs that have been put into place,” Pollard said. “What would Oklahoma look like without Republican leadership over the last 10 years?”

Langthorn is optimistic about Democratic chances in 2018 but is keeping realistic goals.

“We’re not expecting to get a majority in 2018,” Langthorn said, “but we are hoping to break the Republican supermajority.”