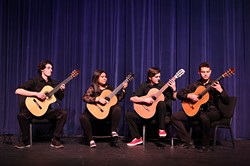 When Mark Mann learned how Oklahoma’s budget shortfall would affect arts education at Classen School of Advanced Studies, he immediately thought of bourbon.

“Every year in October, we pick a different children’s charity to benefit with our Scotch dinner. We partner with Glazer’s, a distributor in Oklahoma,” he said. “We’re already doing Scotch, so I asked [Glazer’s], ‘What do you think about bourbon?’”

In short, Mann knows the healing power of fine liquors.

“In the past, we had a full-time guitar teacher. This year, when budget cuts hit, we had to lose eight positions and all our adjuncts,” she said. “That’s almost 15 percent of our teaching staff. When you have a school like Classen, where we have different majors in addition to providing the required class load, those cuts make a big difference.”

In order to come in on budget, one of the teachers let go was the guitar instructor. Without an instructor for those classes, guitar would be dropped from the curriculum.

When Davis received a phone call from Mann offering a fundraiser, it hit the right chord.

“It’s so exciting,” she said. “We would like to hire an adjunct to teach three classes of guitar. We’ll need close to $14,000 to be able to keep the guitar program.”

“I reached out to her through a family member, hoping initially she would offer us something signed to auction,” Davis said. “Then I got information that she’s going to donate money to help out of the kindness of her heart.”

Mann said his event partners, his wife Tonya Mann and friends Marc and Barbara Brockhaus, have been integral to the response they’ve received so far.

“I suspect we’ll have about 200 people,” he said. “With auction items, live and silent, and parents selling tickets, this is turning into quite a big endeavor.”

Glazer’s help with bourbon has been tremendous, he said, and Kamala Gamble of Kam’s Kookery will donate most of the food and labor.

“Another individual is donating a whole roast pig,” Mann said. “It’s going to be the centerpiece.”

He said they hope to raise more than $50,000 for the school, saving the guitar program and helping shore up other areas that were cut. 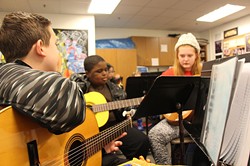 “Almost assuredly, this will be an annual event we’ll do for Classen,” he said. “Everybody involved in the district and the school has jumped onboard. And if the state ever gets their act together on the budget, Classen can use the money to do other things for students.”

Print headline: Budget blues, When Classen School of Advanced Studies was forced to cut the guitar program, the community stepped in to help.