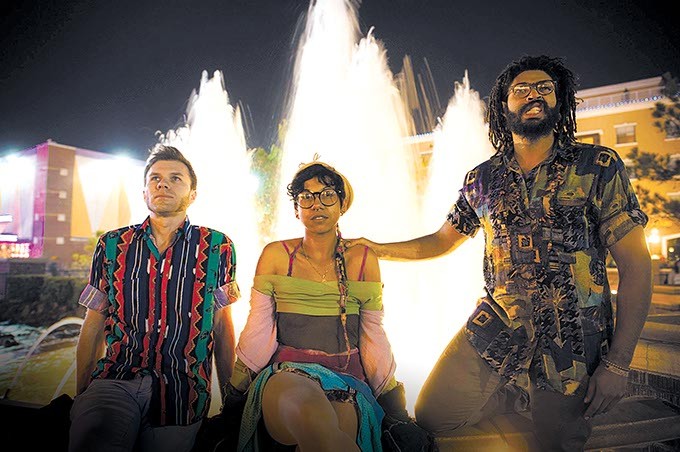 “We all came out of some bad stuff,” said “The Reverend” Justin Hogan, a bona fide Internet-ordained minister who, like most members of eclectic hip-hop outfit Bowlsey, eschews birth names for stage names.

After moving to flee a drug dealer at age 12, singer Clarissa “Cid” Castillo’s yellow brick road would eventually lead her out of the scarier corners of Oz, but not before facing homelessness, a drug-entangled mother and life in a housing project where only one tenant owned a TV and a telephone. To use either of them, Castillo had to pay her in Earth money, even though the woman believed herself to be a galactic princess in Texas by mistake.

Castillo and Taylor “Shraz” Mercier met in a Houston high school, where they survived by hawking knockoff Air Force Ones and body jewelry, zipped into tiny baggies like drugs, to suburbanite kids. Castillo followed Mercier to Oklahoma after graduation, and after the death of his father, Mercier spent much of that year without Castillo, even sleeping in alleys. When she finished school and joined him, they started a tradition of getting kicked out of houses.

Meanwhile, Hogan lost his band of five years and was in the process of losing his fiancée. He tried to stay in the relationship for the sake of her son, but he was eventually single and homeless, spending that summer bouncing from couch to couch.

Mercier and Castillo met Hogan when he erroneously parked in their driveway while dog-sitting his friend’s 15-year-old French Canadian.

“My first emotion was being ticked,” Mercier remembered.

Hogan smoothed things over by loaning them a record player and buying them a pizza. He came over to jam and saw Mercier rapping and playing an organ at the same time.

“Nobody does that,” Hogan said to Mercier. “You should record that.”

Suddenly, Hogan was Bowlsey’s manager, and then he moved in. He had degrees in music business and guitar from the University of Central Oklahoma’s Academy of Contemporary Music, and he was content not to interfere creatively. But that inevitably didn’t last.

“We wrote songs together, because that’s just what we do,” said Mercier, who started playing piano in kindergarten and spent years of isolation in Texas, honing his guitar technique. “The organ was new to both of us.”

Soon came SXSW and a Texas tour. But for Bowlsey, these weren’t opportunities to play rock stars; they were business trips. They got up early every morning and headed to malls and college campuses to pass out their music and spread their name.

The band released its first EP, Sleepy Weather, in Feb. 2013, two months after its formation. On Saturday, Cid, Shraz and The Reverend will release Decorous, their first full-length album, which promises to have stronger hip-hop leanings and more confident organs.

“We all [came] from low places, and now this is happening, and it’s so nice because it’s so natural,” Hogan said. “This is the best band experience I’ve ever had.”