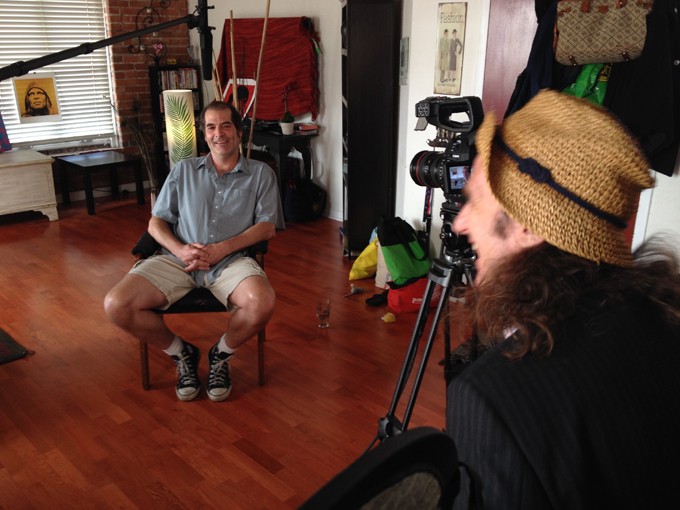 Soon, tapes were made of those calls. Then compilations. Then bootlegs. Then a cult movement of sorts sprang up across college campuses as phrases like “I’m gonna bathe your entire family tonight” and “hot dogs and shindigs” crept their way into the lexicon of Oklahoma’s rebellious and artistic youth.

Recently, Oklahoma-tied filmmakers Bradley Beesley and Ben Steinbauer, along with local musician and film producer Tyson Meade, launched a Kickstarter crowdfunding campaign to make a documentary about the man and prank call culture.

Calls to Okies: The Park Grubbs Story has a tentative release date of spring 2015, Beesley said. The Kickstarter campaign runs through Sept. 11 and has already earned more than half of its modest $18,500 donation goal.

Beesley, the creative mind behind The Fearless Freaks, Okie Noodling (I and II), Christmas on Mars, Sweethearts of the Prison Rodeo and others, has a long history of documenting the offbeat and often-surreal lives and experiences of everyday people. In the early 1990s, his first art films as a student at the University of Oklahoma were music videos for The Flaming Lips.

This film hits really close to home, too.

Back before caller ID, cellphones, Jerky Boys or Crank Yankers — and even before Tulsa-based hit comedy DJs unleashed Roy D. Mercer on the unsuspecting public — there was Park Grubbs.

“The calls were way more popular in Norman than in Bartlesville,” Beesley said. “Because the joke was on Bartlesville, the humor was lost on some of the locals.”

When he went to OU in 1990, Beesley quickly realized that his art school friends already knew about the tapes.

“If you really liked someone and thought they were cool, you played these tapes for them before you even played a record,” he said.

It was punk rock, fuck-the-man anti-authoritarianism at its most hilarious, he said.

Meade, a Bartlesville native now living in Oklahoma City (and former lead of proto-alt-rock acts Chainsaw Kittens and Defenestration), is co-creating the movie’s soundtrack with Flaming Lips multi-instrumentalist Steven Drozd. They are recruiting other musicians as the Kickstarter campaign gains momentum. The Polyphonic Spree might also contribute, Meade said.

Meade, now in his 50s, has known Beesley since Meade was 17. This story goes back a long time.

“I’ve wanted to make this movie since I first started film school,” he said. “I’ve storyboarded and re-created it in my mind for years ... Everyone else wants to be a part of it because everyone else has known about these tapes for longer than I have.”

It certainly didn’t take much to pull Meade into the mix.

“At first, I thought these calls were mean, but these people stayed on the line and completely gave themselves over to this wildness,” Meade said. “Back then, you took every call because nobody got many calls.”

Nobody was off limits, either: classified advertisers, dentists, doctors, urologists, receptionists, families, teens and even their parents.

“Nobody knew that these tapes were being made and traded like punk rock bootlegs,” Meade said. “Park Grubbs had no idea this was happening until we contacted him about this movie.”

Meade realized that, at some point, everyone — even in the moneyed, conservative town of Bartlesville — enjoyed subversive humor.

“Will you fondle my member?” is another Grubbs line that gets both Meade and Beesley laughing. Everyone seems to remember Grubbs, but some won’t cop to knowing the person behind the calls. A local news anchor might know. And the girl who grew up to head the Bartlesville Chamber of Commerce — she thinks she knows who Grubbs really is. They all remember the calls, and they even remember playing them for their parents.

“Now that word’s coming out about this film, everyone I talk to tells me they had a copy of that tape when we were in school,” Meade said. “That’s, like, 800 people.”

Once film plans were announced, Meade joked that Grubbs went into “hiding.”

“He’s the J.D. Salinger of prank calls,” Meade said. “He doesn’t want to reveal his name, who he is. He’s not proud of it, but he’s a counterculture star. He’s part of our lives. I still invite all my new neighbors over for hotdogs and shindigs.”

Meade hinted that Grubbs might actually be a trio of friends. But who will come forward? Right now, nobody knows — not even the filmmakers, though they hope to change that.

Steinbauer was Beesley’s roommate for several years in the early 2000s. His documentary about “the angriest man in the world,” Winnebago Man, chronicles the history of Jack Rebney, a reclusive man best known as the subject of one of the Internet’s earliest viral videos.

Beesley and Meade agreed that there’s a similarity in that film to what they’re doing today.

“Ben has this way of revealing people in a really sweet way,” Meade said.