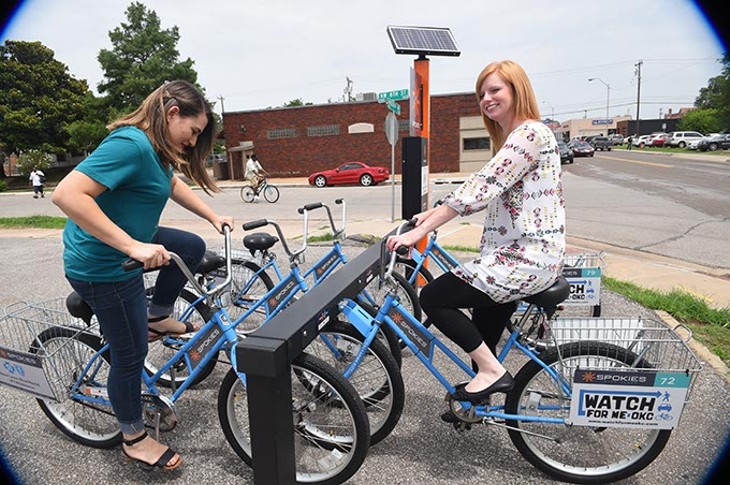 Trisha Neece checked her route one final time on her smartphone before straddling her bike and pedaling off to the convention center about 10 blocks away.

In town for a conference, Neece was without a car in downtown Oklahoma City but not without options for getting to her destination.

“I would have never thought about bringing a bike because of having to deal with it,” Neece said before sliding her credit card into the Spokies kiosk at the corner of Hudson Avenue and Eighth Street. “This just seems like a good way to get to the other side of downtown and not have to worry about [parking] a car or parking my own bike.”

The newest station, in front of Elemental Coffee Roasters at 815 N. Hudson Ave., also came during a program rebrand and new sponsorship agreement.

“The rebrand not only brought us a new look, but changes to the actual equipment of the bikes,” said Brent Tongco, Spokies general manager. “We took every single bike and stripped it down and did a thorough inspection of the frame. The bikes that passed were stripped of their rust and paint.”

Bicycle sharing programs existed as long ago as the mid 20th century, but modern programs took hold in cities about 10 years ago. OKC’s program is relatively young, but Tongco said it is already entering a new era with newly built bikes, new branding and new technology.

“I’ve been in the bike-sharing industry since 2008, and between then and now, so much has changed,” Tongco said. “It’s a very young industry, but we have seen continued improvement across the industry that we want to bring here.”

Spokies ridership reached 6,515 in 2014. Through July 30 of this year, it hit 4,088, according to data provided by Tongco. By month, ridership appears to be slightly down this year over last year. However, Tongco said overall bike availability decreased after removing some in Spokies’ reboot, so those numbers need further clarification.

“Last year, the average number of bikes in the system were 45 to 50 bikes, but now, we are closer to 25 bikes,” Tongco said. “As we have completed the reboot, bikes that aren’t up to par for a good system were removed. There were less trips [per month] this summer, but if you divide it by the number of bikes, there were actually more rides per bike, per day.”

“When combined with the EMBARK bus service, which now provides 30-minute frequency on nearly all routes, residents outside the urban core can take advantage of a multimodal connection to experience all downtown has to offer,” Ferbrache said in a recent media statement.

The city’s transit department has added evening bus service to two central routes, and a planned downtown streetcar system is expected to be operational in a few years.

As part of its sponsorship, Blue Cross and Blue Shield of Oklahoma can advertise on the side of baskets attached to Spokies bikes.

“That’s something that almost every [bike-sharing] system does now,” Tongco said about the ads.

“Now, our website is completely redesigned, and I think one thing that is huge is we have a real-time map on our website. And anyone with a smartphone or computer can go online to look at the map and click on one of the stations to know how many bikes are available at any time,” Tongco said.

The service allowed Neece, who rode a Spokies bike to the convention center, to avoid parking fees and traffic.

“I’ve used this in other cities, like Austin, and it’s really fun,” Neece said.

As the program increases its presence downtown, Tongco said he hopes it becomes an option for residents and visitors alike.

“I think the rebrand of the bikes and the rebranding of the stations has done a tremendous job of gaining more attention of the system,” Tongco said. “The bikes are playing an important role in offering ways to get around downtown.”