“When we made a proposal to start an archive that would, over time, put small, comprehensive collections of Brett’s work in museums ’round the country, they liked the idea.” 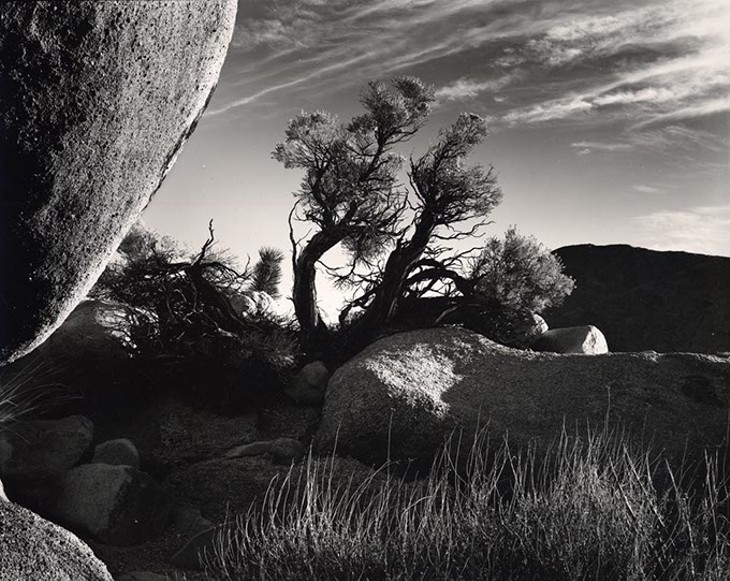 Oklahoma City Museum of Art owns the second largest collection of photographs by Brett Weston (1911-1993), with a total of 460 works, including a recent gift of 50 gelatin silver prints from The Brett Weston Archive and Christian Keesee Collection.

Brett Weston, the second of four sons of American photographer Edward Weston (1886-1958), has been called the “child genius of American photography.” He started taking photographs on a trip to Mexico with his father at the age of 13. The next year, they returned to California and he began exhibiting his own photographs with his father and assisting him in the darkroom. He was featured in the international German exhibition Film und Foto, and by the age of 21, he was giving one-man retrospective museum shows.

While Weston explored landscapes, he tended to flatten the plane to bring out the design structure of the photograph. As he got older, his view got closer until it became less about the subject and more about the design, to the point that his close-up prints of objects worked like photographic cousins to the abstract expressionist painters who were his contemporaries. The recently donated photographs, taken between 1937 and 1980, are primarily these types of abstractions.

In 1996, Oklahoma-born businessman, philanthropist and chairman of the board of the Kirkpatrick Foundation Christian Keesee wasn’t that familiar with Weston’s work when he heard that the photographer’s estate was for sale. He flew out to California to see the collection and quickly received a crash course on one of America’s most significant photographers. That purchase led to Keesee creating The Brett Weston Archive as a resource center for museums, collectors, historians and publishers. He spoke with Oklahoma Gazette about the collection.

Other museums and art dealers had already pitched ideas to buy the estate when Keesee stepped in.

“So many people were involved, whether it was his lawyers, his daughter or other people who owned Bret Weston photographs themselves, and they understood Brett Weston’s legacy,” Keesee said. “When we made a proposal to start an archive that would, over time, put small, comprehensive collections of Brett’s work in museums ’round the country, they liked the idea.”

The majority of the estate is currently housed in the archive in Oklahoma City, but every year, the archive makes contributions to museums around the country that are interested in building their photographic collections; the archive has made 25 donations so far.

“It’s been our practice to make small, but comprehensive collections of Brett’s work to museums around the country,” Keesee said. “Obviously, since I’m an Oklahoman, the Oklahoma City Museum of Art (OKCMOA) is a logical recipient, as has been the Fine Arts Center in Colorado Springs, the Getty Museum in California, the International Center of Photography in New York and the Tate Gallery in London. It’s really nice, what’s been done. Brett’s daughter, Erica, is thrilled with what we’ve been able to do over time, not only in increasing the value of Brett’s work, but increasing the popularity and the knowledge of him as an artist independent of his father. It’s working out real well, and I’m thrilled Oklahoma City is happy with [its] gift.”

Keesee believes that cuts to arts programs in public schools throughout the country can have a devastating effect on our culture.

He came up with this philosophy as a board member of American Ballet Theatre in New York and Oklahoma City Ballet.

“In New York and San Francisco, they think their ballet is the only ballet in the world,” Keesee said. “But if you look at the roster and you look at who is performing, no one is from Manhattan; they’re from Sioux Falls, Houston, Oklahoma City, Tulsa and all places in between. If art is going to thrive in our capitals in the United States, there has to be art instruction in the regions.”

Keesee said he asked the director of the Metropolitan Opera what the biggest threat to opera was in the United States, and the director said it is that there is no voice instruction in high schools anymore.

“When my parents were in high school, there was theater, band, shop, home economics — there were all these things that you learn in high school that could prepare you for a career, but none of that exists in public school anymore. I feel very strongly about regional arts education and Oklahoma Contemporary, an organization that I am involved with, which is trying to take up some of the slack that has been left behind by long-term cuts in public arts education.”

Some of the new Weston acquisitions will be on display at OKCMOA starting March 12 in Our City, Our Collection: Building the Museum’s Lasting Legacy, which tells the history of the museum and the many major gifts and bequests from its patrons over the decades. The exhibition will run through the summer.

“Of course, we will have a section about the Kirkpatrick Foundation and Christian Keesee,” said OKCMOA curator Catherine Shotick. “They’ve made multiple gifts through the museum’s history, not just of artworks, but also monetary gifts. They’ve been very generous.”

For more information about The Brett Weston Archive, visit brettwestonarchive.com.

For more information on current and upcoming exhibitions at OKCMOA, visit okcmoa.com.