A little over a month after launching, the owner of Norman’s newest craft brewery said she can’t believe the reception they’ve received as they work to build a space for those marginalized and underrepresented through the power of beer.

“It’s been unbelievable, I mean just beyond all expectations,” said Suzette Grillot, who co-owns Equity Brewing Co. “I knew that people were very supportive and encouraging along the way, we’ve always had great feedback from people as we’ve shared free beer for a year and a half and built a brand and really established ourselves as a company that is committed to social justice.”

Grillot said the idea for the brewery came about in late 2019 as she visited a local brewery for beer donations for an event that she and a former business partner were hosting. After spending time in the brewery and going through a number of questions with brewery staff, Grillot said she learned that the state featured no all-women owned breweries, nor women head brewers, and wanted to change that statistic.

“There aren’t any women in the industry really, or at least now, all women- owned breweries, and I thought ‘Well, we’ll just accomplish a lot of things here,’” Grillot said. “We’ll develop an amazing product that people always want and disrupt an industry a little bit

and make it more inclusive and develop the mission and educate the mission to bring more people into the craft beer world and spaces, but also have that social mission to change the status quo, so that there is more diversity, inclusion and equity, hence the name of our brewery, in this world.”

Grillot said she immediately began learning how to brew the beer herself, something she had only limited expo- sure with from a friend while they were in graduate school, but that it was a life- long passion for the love of beer that propelled her.

Being head-brewer was important, as Grillot mentioned that few under- stand the importance of women in the history of beer, adding that the drink’s creation is due to women from thou- sands of years ago who were responsible for the food and drink of households at the time.

“Women created beer and produced beer for the home and for their community and were always responsible for the beverage for many, many years until capitalism took over around 1500 or so and taverns became a money-making opportunity. So, women were kind of pushed out of beer,” she said.

The brewery features several staples that are similar in style to what you might find in other taprooms, such as a saison, Kölsch, IPA and a stout, but taking a glance at the can labels or the beer names, and you’ll see that the message of equity is in everything the brewery puts out.

Solidarity Saison, Collective Action Kolsch and Protest Porter are among the

beers offered, each with a name chosen specifically by Suzette Grillot, who is also a professor of International and Area Studies at the University of Oklahoma.

“The names, I love to name things. I’m also a writer, obviously, as an academic and I love to title things. It’s just fun to play with words. I really like to use titles, or words, that are meaningful, and again, reflective of our social mission,” she said. “Whenever I create a new beer, I try to come up with some- thing fun that’s reflective of not only beer, but something that speaks to our mission and perhaps also reflects a feeling I’m having at the time.”

More than just a beer company

Since February, Grillot has been operating the business with her daughter, Hannah Grillot, and the two held the grand opening of their taproom on July 2. Keen to find and work with other women entrepreneurs, Suzette Grillot said she’s already made two great partnerships with local women, who added a dining option to the new taproom.

After hearing about the amazing pas- tries of Soreeta Hines, of Brown Cow Bakeshop, Suzette Grillot said she reached out and asked Hines if she was willing to make something utilizing her beer. The end result was more than she could have imagined.

“I can’t describe it, you’ll just have to taste these pastries, because they’re just amazing. The things that she makes and uses our beer to make them, it’s really remarkable,” Suzette Grillot said. 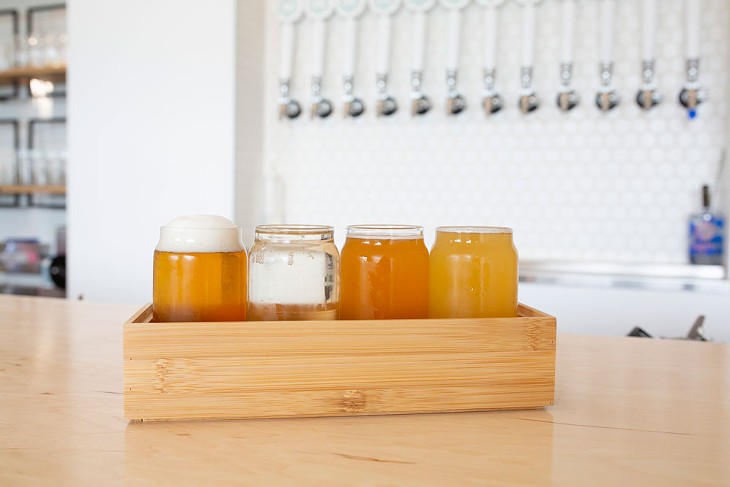 Wanting to provide something savory in addition to the sweet, she said she also reached out to Brooke Rood, of Forage and Gather, and asked if she could provide the taproom with charcuterie boards for guests. Rood suggested setting up shop in the taproom, which left the mom and daughter pair ecstatic. “I couldn’t have been more thrilled,” Suzette Grillot said. “Hannah and I were just in like permanent smile mode for like a week, that the space would actually be used by other people than just us brewing beer, other women entrepreneurs were going to come in and use the space.”

Also located in the space is a small bookstore, the idea of Hannah Grillot, which features a curated section of books authored by women, people of color, members of the LGTBQ community, and others that Suzette Grillot said might have difficulty establishing their voice in the male-dominated publishing industry.

In addition to the overwhelming positive response to the new taproom, demand has been high, as Suzette Grillot said she’s received numerous requests from restaurants and liquor stores to carry her beer, but they don’t currently have a lot of capacity to distribute much volume at this point. She said the brewery is currently working with a couple of restaurants in Norman and Oklahoma City to put her beers on their taps in the near future.

“It’s a good problem to have, to have people wanting our beer but having to come to the taproom to get it. We hope to be able to provide more beer to the community sometime soonish,” Suzette Grillot said.

“We are a beer company, but we’re more than just a beer company. I feel like I’ve made pretty good beer. I’ve had to work hard to learn how to make drinkable, good beer,” she said. “So, it is good to see and watch other people enjoy that and enjoy each other and develop a sense of community and belonging in our space. It has just been, just beyond anything I could have expected. I hope it continues.”