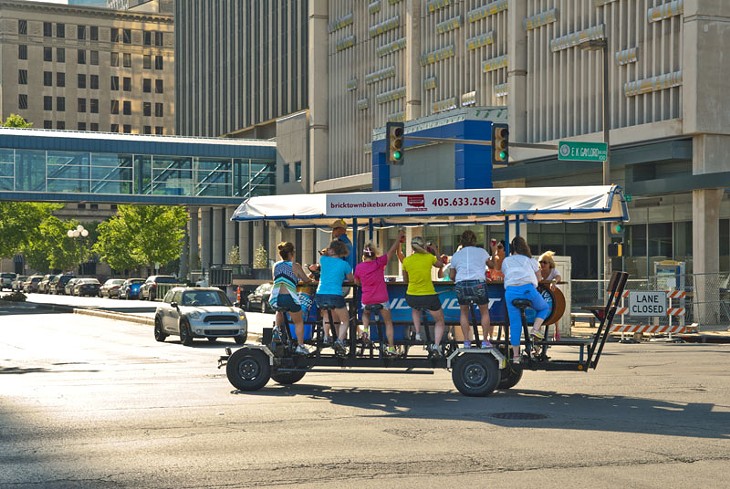 For its second year the Bricktown Bike Bar hits the streets with some new options.

If you happen upon a mobile bar on wheels in Bricktown being powered by riders pedaling and drinking beer remain calm. It is not some hijacked circus vehicle or runaway parade float. It is the Bricktown Bike Bar.

In it’s second year, bike bar owner Nick Oxford has added a new tour option he hopes will highlight Oklahoma beers and some of Bricktown’s best beer bars. The 16-passenger bar features 10 pedaling seats and six leisure seats, and typical tours take about two hours. Oxford said the new beer-tasting tour will be similar to the tours the Bricktown Bike Bar has been offering since it opened last year.

“We will have the same group size, but each tour will feature a local beer expert, and they last about two and a half hours,” Oxford said. “One of the experts is from a local brewery, and one is from a Bricktown bar.”

“A bunch of cities won’t allow people to drink in public like this,” Oxford said. “In a sense, we’re kind of like a limousine or party bus, so customers have to provide their own beer and wine; we don’t sell any alcohol. Also, we don’t allow liquor on the bike bar.”

The beer expert on the tour will talk about the various beers in the packages, explaining stylistic differences, brewing methods, history, and other facts relevant to the beer-tasting experience. The goal is to provide entertainment, a good time with friends, and a little education about beer.

The tour is available Sunday through Thursday evenings, Friday afternoons and evenings, and on Saturday at noon and in the evening. Prices vary according to day or night of the week, and the tours can be extended beyond the two or two and a half hour standard. For prices, packages, and more information visit bricktownbikebar.com.