Because of its status as a cornerstone of American music, blues contains multitudes, and what was once a genre that could be categorized by its geographic origins now defies simple labels. Bricktown Blues Festival, a free, two-day event Friday-Saturday featuring a diverse collection of homegrown talent, shows that Oklahoma comes to the blues from many different starting points.

Saturday night headliner Shane Henry, an Oklahoma blues wunderkind now based in Los Angeles, proved his bona fides in 2003 when he opened for the late B.B. King on a 30-city tour.

With support from like-minded acts such as Kenny Wayne Shepherd and Double Trouble, Henry launched his recording career with his 2004 debut, Deliverance. After a foray into soul and R&B-styled guitar-pop on 2011’s Beauty in the Struggle, Henry returns to full-time guitar-slinging with his upcoming album, Light in the Dark.

“People had been saying that they missed hearing me wail on the guitar, so I brought that element back into my show more,” Henry said. “What’s cool is that it’s still connecting with people. We’re always growing and evolving, and it usually comes down to what you’re listening to and what moves you.”

Henry, who will sell advance copies of Light in the Dark during his 10 p.m. slot, said he wrote about 35 songs in advance of  sessions with producers David Ryan Harris, who has performed with John Mayer and Nick Jonas, and Justin Glasco. While he is moving forward with a self-release strategy, Henry said he expects to sign a distribution deal in advance of the album’s planned October wide release. His main focus for now, he said, is getting the positive, hopeful songs on Light in the Dark heard by his fans.

“I want people to walk away feeling inspired and connecting — not just musically, but lyrically — to these songs,” he said.

Henry comes from the tradition popularized by Texas blues-guitar legends Jimmie and Stevie Ray Vaughan, but Bricktown Blues Festival has room for all varieties. 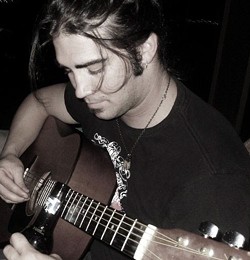 For Benjaman, who performs 9 p.m. Friday, that comes from a uniquely Tulsan vantage point. His two albums, 2010’s Something and last year’s Sneaker, offer sharp-eared revivals of the Tulsa Sound that rose to prominence in the 1970s.

“I think that’s always been a difficult thing for people to pin down. The artists associated with it are pretty wide-ranging,” he said. “Pretty much, the two biggest progenitors of it would be Leon Russell with his amped-up shows and J.J. Cale with his laid-back thing. But the Tulsa Sound is a rhythmic-based music. You have this certain groove that gets cooking, and it is blues-based and rhythm ’n’ blues-based in the 1960s sense.”

Benjaman said he draws a distinction between the Tulsa Sound and its neighboring Red Dirt cousin by going back to the godfathers of each subgenre. While Red Dirt players derive much of their style and viewpoint from the example set by Woody Guthrie, Tulsa Sound founding fathers based their style on the work of Chicago bluesman Jimmy Reed, whose landmark songs like “Big Boss Man” and “Baby What You Want Me to Do” were fueled by an unusual rhythmic intensity.

“Even though Jimmy Reed was a Chicago bluesman, you won’t find anyone in the Tulsa Sound who doesn’t know a couple of Jimmy Reed tunes,” Benjaman said.

Reed’s full-force rhythm as refined by Cale gets its most prominent showcase on Benjaman’s “Your Music” from Sneaker. As a testament to the importance of rhythm in Benjaman’s work, he said his final touch during that song’s final mixing phase was to turn up the beat.

While he’s fiercely loyal to his signature sound, Benjaman did not fully absorb Cale’s work until he was about 30 years old. Before that, he was heavily influenced by Beck’s Odelay, and to this day, he sees a direct link.

“You know, Odelay was such a rhythm-based record, too,” he said. “Beck kind of had to know about J.J. Cale when he was making that.”

Corner of Reno and Oklahoma avenues, on the Bricktown Canal