Bricktown Brewery gets twisted with its latest menu shake-up 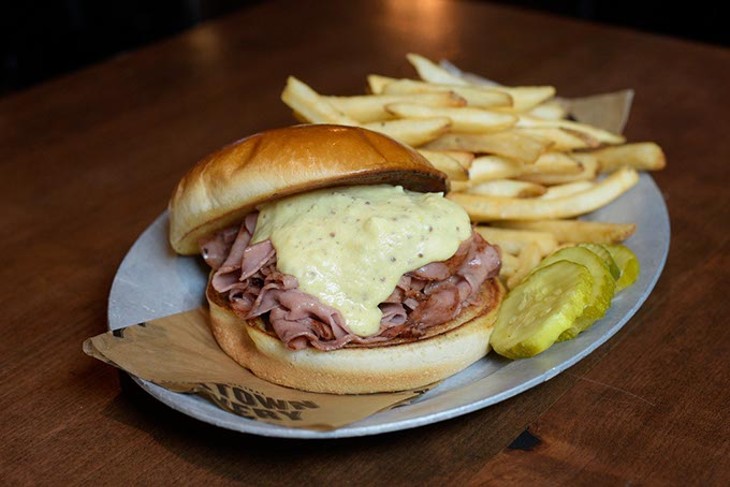 This particular list, however, includes not-so-typical offerings that will eventually dwindle down to six dishes as part of Bricktown Brewery’s new Twisted Comfort Foods menu.

The concept, which debuted in February and rotates every eight weeks, features quirky takes on old classics like Spam fries and a hot bologna sandwich.

Between Warfield and his two partners, Matt Thomas and Mike Beighey, who both double as vice presidents of operations, there are many years of restaurant experience powering Bricktown Brewery.

Yet Warfield still has his doubts, like when Beighey offered up the idea of deep-frying a slow-roasted St. Louis-style rib to add to the brewery’s already-expansive menu and beer offerings.

“I kind of poo-pooed it,” Warfield said. “I’m waiting to shoot down this chicken-fried rib. He brings it out. I said, ‘That’s really good.’”

Just like that, Warfield was sold. It became one of the six items that debuted Aug. 21 at Bricktown Brewery’s 12 locations in Oklahoma, Arkansas, Kansas and Texas, joining jalapeño Spam fries, a bacon and tomato grilled cheese with tomato soup, a hot link corn dog, Boom Boom Shrimp macaroni and cheese and a hot bologna sandwich.

What would typically take a chain months to plan and test new recipes takes as little as a few weeks for Bricktown Brewery. Warfield, Thomas and Beighey handle all the research and development, coming up with as many as 12 to 20 items before trimming it to six.

“We make decisions,” Warfield said. “We don’t do focus groups. We don’t do tasting groups.

“If we like it and we’re proud of it, we’re willing to put it in front of them.”

Some of the ideas are new and, quite frankly, random, like the Spam fries, which come in a green Spam can and are served with Sriracha ketchup.

So how did Warfield come up with that idea? He didn’t.

Other items spawn from previous concepts. Years ago, the brewery featured a corn dog with a Schwab’s hot link instead of a traditional hot dog.

Not all items are quirky, though. Instead, all it takes is a unique spin or variation on a traditional staple. For example, the chicken-fried rib is served with barbecue sauce that features a blueberry balsamic reduction. Standard macaroni and cheese is elevated with fried shrimp covered in a sweet and tangy sauce.

And the bologna isn’t the typical slice of mystery meat on white bread with mustard. The brewery’s version is shaved, cooked on a flattop for caramelization and served with a mustard cheese sauce on a brioche bun.

Prior to Warfield’s arrival, Bricktown Brewery served what he described as an Applebee’s-type menu with large portions mostly consisting of frozen food.

“You weren’t hungry when you finished, so it served its purpose, but there was nothing particularly interesting about it,” he said.

Warfield wanted an emphasis on scratch cooking, honing in on larger portions that maintained quality. That meant fresh meat for the burgers and hand-breading the chicken for chicken-fried steak with maple gravy.

“We don’t try to be too fancy, but we try to give things flavors that surprise you,” he said.

The brewery’s concept for the Twisted Comfort Menu spawned from an idea to create menu items sold at a lower price point. (Items range from $5 to $12.) The rotating options are an alternative to a discount or limited-time offer promotion many chains use. The “twisted” part created more buzz.

“It gives us a reason to have new items, which I think is fun,” Warfield said. “The new items are something to talk about on social media.”

Warfield said the new concept accounts for 8 percent of food sales. Top sellers include the macaroni and cheese and the chicken-fried ribs.

Once new items are released, the partners waste little time planning the next batch of unique eats.

Warfield said seasonal dishes could possibly include a pork pot roast over jalapeño cheese grits or a Shepherd’s pie with bison meat. Previous options included a cornflake-crusted catfish, bacon macaroni and cheese with pretzel croutons and a replica of the Shake Shack burger. Some, like the spicy chicken sandwich, generated enough buzz to land a full-time slot on the menu.

The changes are part of the brewery’s constant growth from one brewpub when Warfield came aboard in 2011 to 11 additional satellite restaurants and a new production brewery.

To maintain consistency with the new menu items at all 12 locations, Bricktown Brewery uses a centralized recipe management system called Chef Pad. Each restaurant has notebooks and screens where employees can look up recipes with presentation photos.