Bricktown's In the Raw sushi restaurant gets new name and look

Anna Mains knows Bricktown is cool, and she wants to prove it.

Anna and husband Drew Mains, who own Rockford Cocktail Den, Knucks Wheelhouse and newly rebranded Dekora!, 200 S. Oklahoma Ave., Suite 130, staked their fortunes on Oklahoma City’s original entertainment district in 2013 when they purchased a struggling outpost of Tulsa-based In the Raw restaurant.

“We bought In the Raw a little over three years ago,” she said. “It was never our brand to begin with; the style and the idea were someone else’s.”

Part of the reason they could afford to buy it was the restaurant’s struggle to bring in and retain customers.

“I feel like we were able to buy it because of the rocky beginning in Oklahoma City,” she said.

Their management skills made for better service and consistent quality, which helped right the ship. Unfortunately, the news didn’t spread as quickly.

“So many people would say, ‘I never knew it changed owners. We came there four or five years ago and it was horrible and we never came back,’” Mains said.

The restaurant needed a complete break, she said. Oklahoma City’s In the Raw already had a different menu than those in Tulsa and Broken Arrow, so why not go all the way and change the name?

Instead of continuing to rehabilitate the image of In the Raw in Oklahoma City, the Mains decided to rebrand the restaurant and make it their own.

“I wanted to bring something that was going to have a vibe that was our personality: fun and vibrant,” Mains said.

Bricktown has struggled in recent years with feeling too corporate, she said. Whatever In the Raw would become, it needed to be original and local while still addressing the needs of the district.

“What can be hip and fun and cool but also feel comfortable to bring your kids to?” Mains said.

Their answer is Dekora!, which retains the sushi menu that previous customers love and plays up tasty, sharable Japanese street food.

“Seeing the evolution of the district, there are more families coming to Bricktown,” Mains said. “Dekora! fits that evolution. It has a more all-ages, casual feel to it.”

Bricktown is a district with an image problem, Mains said.

“When you say something is in Bricktown, no one says, ‘Oh, great! Bricktown!’” she said.

It has become cool to hate the district, she said. Everyone continues to reinforce Bricktown’s negatives, which becomes a self-fulfilling prophecy of sorts.

“I mainly hear a lot of complaints about traffic and parking,” she said. “Once the road construction ends, it will help the traffic, but there’s always free parking in Lower Bricktown.”

Dekora! even validates parking on Thunder game days, meaning diners can get a $20 parking spot for free just for eating at the restaurant.

To those who think Bricktown is touristy and corporate, Mains said there are small business owners everywhere in the district.

West in Bricktown is owned by Rick and David Haynes. Crabtown is part of the local Pearl’s Restaurant Group. Other locally owned spots include Room 222 at The Brick, The Mantel Wine Bar & Bistro and All About Cha.

“I’m about as local and small business as you can get,” Mains said. “We’d like to see it come full circle. Just like everything else, if someone tells you, ‘This place is cool,’ then everybody wants to be there.” 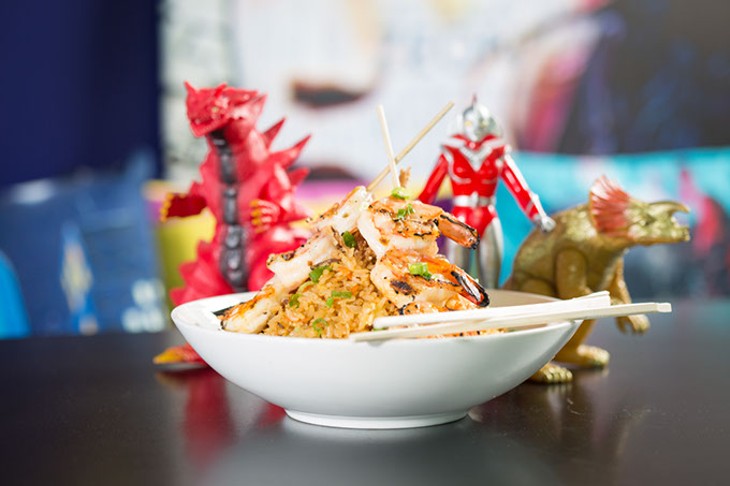 Mains said it’s common to have friends from Edmond stop in at Rockford, 317 NW 23rd St., and say Bricktown is just too far away.

“The people who were in Bricktown five years ago are now in Uptown,” Mains said. “And I’m saying, ‘You know Bricktown is just four minutes up the street, right?’”

Without the efforts of Bricktown pioneers, Mains thinks we wouldn’t have many of Oklahoma City’s other districts.

“It if weren’t for Bricktown, would we have Uptown 23rd? Would we have the Plaza District?” she asked.

Hoping and wishing won’t bring people back to Bricktown, but the Mains think Dekora! can.

“When we decided to rebrand, we wanted to attract the people who won’t come to Bricktown because they think there’s nothing cool down there,” she said. “It’s difficult to do that and still have that amazing base of regulars who come in all the time.”

Dekora! has the same owners and staff that turned In the Raw’s fortunes around but adds a pop culture-centric look, courtesy of Robot House Creative. The back wall is a mural depicting a giant monster fighting costumed defenders over a city.

But the restaurant’s new name might also be causing confusion.

“People didn’t understand In the Raw. Was it a strip club, an oyster bar, a raw health food thing?” Mains said.

Dekora! isn’t immediately understood, but the name comes from a Tokyo street fashion called decora that uses bright, flashy accessories to create a feeling of playfulness. For the Mains, the extreme fashion fits in with their extreme brand of hospitality, doing whatever it takes to please customers.

Once customers find their way into Dekora!, Mains is confident they’ll want to explore more of what Bricktown has to offer.