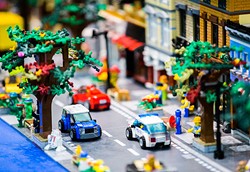 In addition to helping plan the convention, Greyson Beights, who spoke with Oklahoma Gazette via email, is a history student and the author of Medieval LEGO, which features scholarly historical information paired with LEGO illustrations. Medieval LEGO was published in 2015, after Beights turned 15.

Beights’ love for history and LEGO coalesced early in the form of a special Christmas gift.

“I received a LEGO castle set,” he said. “And after that, my involvement has snowballed into where I am today.”

Now, Beights has a variety of roles with BrickUniverse, including marketing, planning and executing various conventions, which has given him the opportunity to travel and connect with fellow LEGO enthusiasts.

According to Beights, inspiration remains a hallmark of BrickUniverse’s larger goal of encouraging creativity and ingenuity through LEGO to the next generation.

“People love LEGO because the possibilities are endless — the only limit is one’s imagination,” Beights said.

LEGO, which recalls the Danish phrase for “play well,” has come a long way since the company released its first set of interlocking bricks in 1949. While LEGO is certainly popular with its younger demographic, Beights said the bricks have a lot to offer.

“LEGO can help foster science, technology, engineering, math and even history,” he said. “I have seen everything from a working LEGO car to a working robotic LEGO space launch complex.”

“Right at their arrival, attendees will be [immersed] in a world of creativity and inspiration,” he said. “There are amazing art galleries with massive displays.”

Beights characterized the LEGO brick artist culture as interesting and unique. The convention features works by artists such as Brooklyn-born Jonathan Lopes, who creates urban landscapes from LEGO bricks.

“He’s up-and-coming and really doing it the right way with his mindset, creative process and execution,” Beights said. “I’ve been honored to have seen his work up close for the past few years.”

“If you can think it, it will most likely be at the show,” Beights said.

General admission tickets are available for $15 each day on brickuniverse.org/okc.