A homeless mission heals hearts and homelessness with the state’s largest free drug and alcohol recovery program. The program recently celebrated the story of three graduates. 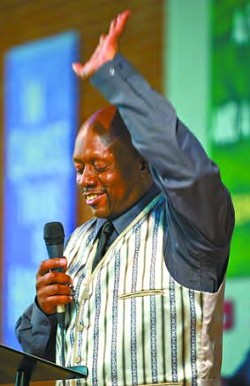 She had lost her job in 2012 at Tyson Foods in Arkansas and came to Oklahoma City in hopes of finding a better opportunity. Two years later, Ford, 54, had overcome homelessness and incarceration to turn her life around.

“I can honestly say that I am a different person,” said Ford, who was one of three graduates to recently complete the Bridge to Life program at City Rescue Mission.

Considered the state’s largest free drug and alcohol recovery program, Bridge to Life is an eight- to 10-month program that helps clients end homelessness and addiction.

“If God can change me from where I used to be to where I am now, then he can change anybody,” Ford said.

A graduation ceremony was recently held at City Rescue Mission to celebrate the latest three graduates of a program that has helped dozens of people since it was launched in 2007. Alfred Luckey and Kelvin Washington also graduated from the program, and a packed audience in the mission’s chapel celebrated their journey to a new life.

“It’s a whole different high here,” said Luckey during his testimony at the graduation ceremony.

For more than 50 years, City Rescue Mission has served Oklahoma City’s homeless population. The faith-based nonprofit provides meals and shelter, along with a variety of skill-training programs that aim to end chronic homelessness.

“We have to recognize that when we leave here back into the real world, we are going to face those same challenges … the same good days, the same bad days,” said Tom Jones, president and CEO of City Rescue Mission. “But one thing we pray they learn is that the God they learned to know while they were here goes with you.”

Hots and a cot  When Ford first came to the shelter, she was simply looking for a meal and a bed.

“I didn’t have any idea that the mission had a program,” Ford said. “I just knew it was a place I could go and get shelter.”

Ford’s first attempt to complete the program wasn’t successful, and she ended up back in prison. After her brief incarceration, she returned to the mission and gave the Bridge to Life program another try.

“It took me two times to complete it, but when I came back the second time, it was a whole different outlook,” Ford said. “It took a day-to-day process to make it.”

A patient attitude is necessary to complete the program, Washington confirmed.

“It’s not an easy road,” Washington said. “You have to take it one day at a time. Yesterday’s prayer won’t do for today.”

For many, the mission offers another chance at life and a supportive community that can’t be found anywhere else.

“This program is really such a unique program that if you really want to do something different and better in your life, this is the perfect program,” Ford said. “Here is this place that is designed to help you get back on your feet.”

Ford’s new lease on life has her looking to help others who are traveling down a similar path. She has a dream of training herself to help others overcome addiction and says there are others she has taken it upon herself to mentor.

“To complete something like this is amazing,” Ford said. “Especially when you consider where you have been and how far you have come.”