In 2019, Positive Tomorrows — Oklahoma City’s only school for homeless children — celebrates its 30th anniversary. The milestone year also happens to be when the school will open doors on its large new facility east of State Fair Park, nearly quadrupling the size of its current building.

The current school facility houses a maximum of around 75 children at a time. The new site, to be built at 901 N. Villa Ave., will eventually grow into a school that will offer middle school, special education and early head start young childhood programs from its current elementary school offerings. Positive Tomorrows currently turns away around 100 students each year due to space limitations.

Positive Tomorrows development officer Rachel Durham said the new facility’s architect spoke with students and staff before finalizing his plans. The most common feedback from the children was that they wanted the new school to look and feel a lot like the one they go to now.

“Of course, some kids wanted a place for lightsaber fights or a bigger playground, but I think what translated from that meeting is that the kids feel really safe here,” Durham said. “They feel like it’s a home, and it’s a constant.”

The 30,000 square-foot new school site will indeed include a larger playground. There will also be a soccer field, an open-air stage and an outdoor learning area. To add to the homely feel, each classroom will have its own front porch area.

The increased school space will also feature an upgraded clothing closet, with new shoes, shirts and other items that students can use for no charge. A couple of the classrooms have also been reinforced as storm shelters.

The planned special education area will carry the name of a donor many Oklahoma City Thunder fans are sure to recognize: Kevin Durant.

“He always says that it’s bigger than basketball, and he keeps showing us that it is,” Durham said.

While there is space for additional grades, Positive Tomorrows plans to gradually expand into its new digs, adding a class a year until it reaches capacity. Staffing the new school in its full form will double the number of Positive Tomorrows employees to around 50.

The new site will also include space for a library and indoor gymnasium. In the past, Positive Tomorrows has bussed students out to local libraries or the nearby Boys & Girls Clubs of America to use their services, but the greatest advantage of the new location is that nearly everything the school could ever need is on campus.

“When it’s library day, you just walk down the hall to the library,” Durham said. “You don’t have to take a bus downtown to the metro library.”

Agel has worked at Positive Tomorrows for the last nine years. Even from early on, she could tell the school was in need of a new facility.

“I could see very clearly that we needed a new building, that this one just wasn’t adequate for what we were needing,” Agel said.

When the school finally resolved to move into a new facility, it began a capital campaign that met its $10 million goal in February 2017. Positive Tomorrows will use an additional $5 million in new market tax credits to complete the $15 million project. An official groundbreaking ceremony was held at the new site in June.

There are a variety of ways students might become enrolled in Positive Tomorrows. Parents are often contacted through enrollment days at homeless shelters or rehabilitative services. The school also sees plenty of self-referrals.

“It’s a lot of word of mouth,” Agel said. “A lot of people talk to each other and they’ll meet somebody somewhere.”

Positive Tomorrows often gets calls from parents interested in enrolling their children in the school. In those instances, a staff social worker will meet the parents where they’re at and help them fill out the paperwork.

As eager as Positive Tomorrows is to get children in need into its facilities, the school simply does not have the space to serve most of those who apply.

In addition to an increased capacity for admitting students, Agel is thrilled that the new campus will include more space in general.

“[At the current location] teachers can’t really spread out and do some of the things they’d like to be able to do in a classroom because there’s just not enough space,” she said. 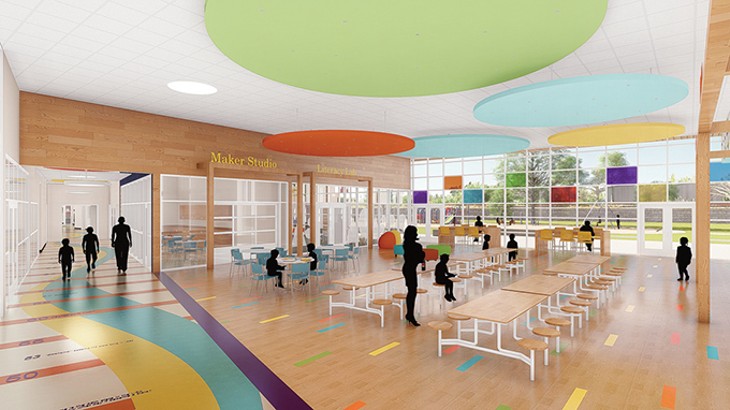 Positive Tomorrows’ goal is not to admit students and keep them enrolled through the course of their education. The school works with parents to get families into stable situations that would no longer require their services.

“We want them to be here for a year or two while they get up to speed academically and socially,” Agel said. “We want them to like school. ‘Academic optimism’ is a term that our director of education uses.”

A major goal is to expose students to as many new things as possible: basketball, swimming lessons, music lessons. Agel said they want to find an interest for the students.

“We find some really talented kids,” she said, “but no one would ever know it because they’ve never been able to try these things.”

Durham said a lot of students come into Positive Tomorrows with the idea that playing on something like a basketball team is only for someone with the money to pay for a uniform or that joining an organization like Girl Scouts is only for those whose parents can drive them to after-school activities. The school wants to open up their world of possibilities.

“If they get to do those things here, it gives them that hopefulness,” she said. “‘Oh wait; I can do these things.’”

In the past, students have taken field trips to grocery stores or movie theaters. Durham said the point is to make them feel at home in places they might not have previously visited. Society should feel like a place they are always welcome.

“What’s the point in working hard in the classroom if you don’t believe tomorrow can be better?” Durham said. “Our kids don’t have control over their circumstances, so we give them that hope to go along with education that you can go out there and do this.”