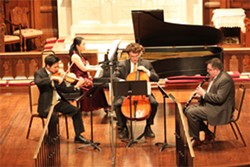 Get up close and personal with music across time and space at Brightmusic Chamber Ensemble’s Lands Near and Far concert. Continuing its 2016-17 season, Tuesday’s 7:30 p.m. show unites iconic works from four globally distinct composers inside St. Paul’s Cathedral, 127 NW Seventh Street. Ranging from the Romantic era to modern day, Lands Near and Far mimics a comprehensive trip across dozens of cultures.

“The title of the concert is very broad in that the musical styles represented in the four works selected for the program all come from different countries,” Chad Burrow, Brightmusic’s co-artistic director, told Oklahoma Gazette. “We have music from Armenia, Hungary, the U.S. and England, fusing Western classical traditions and Eastern European folk traditions.”

“In the setting Brightmusic provides, you’re getting a larger-than-life experience in an intimate setting,” said Sara Grossman, Brightmusic vice president of publicity. “The beauty of chamber music lies in its ability to create unique musical performances with a small group of musicians.”

“Since we don’t normally include ensembles for tenors, this will be a new and original program for Brightmusic and audiences who have attended our concerts,” Grossman said. “Our pairings and collaborations for this show will bring an interesting experience to listeners, especially those unaccustomed to modern and contemporary composers.”

Staying true to the concert’s name, other points of interest come from sources beyond music. Burrow said poetry seamlessly complements and enhances the concert’s transient themes.

“Edward Knight chose the poetry of Sara Teasdale to accompany his works,” he said. “Her poem ‘There Will Come Soft Rains’ imagines another possible time in the future, where humans will be extinct and nature will thrive and hardly notice our absence.”

Staged in close physical and psychological proximity to the audience, Brightmusic’s repertoire confronts individual listeners with larger philosophical connections to the world.

“This text has a conversation between a living man and one who has passed away to another place,” Burrow said. “So the ‘lands near and far’ can be musical, geographical, spiritual or even otherworldly.”

Grossman said she has witnessed the transformative power of chamber music on the most unlikely of audience members.

Lands Near and Far