As Johnnie’s Charcoal Broiler approaches its golden anniversary, expansion is on tap. 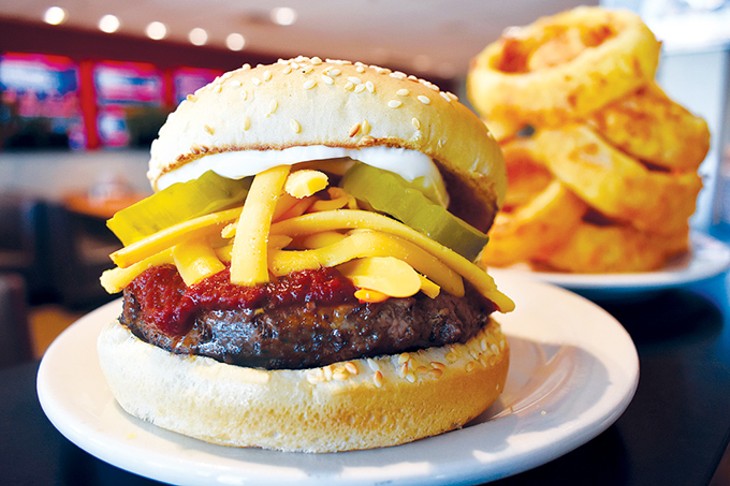 With the recent opening of a Moore location, Johnnie’s Charcoal Broiler is undergoing an expansion and renovation phase that ownership hopes to finish by the Oklahoma City institution’s golden anniversary in 2021.

The new full-sized Johnnie’s location at 2305 S. Telephone Road in Moore is modeled after the layout and updated design of its Yukon location, which was built in 2016.

Co-owner Rick Haynes manages Johnnie’s with his brother David. Their father David “Johnnie” Haynes opened the first Johnnie’s in 1971 after he managed the old Split-T, where he developed many hamburgers that would become Johnnie’s signatures like the Theta and Caesar burgers.

Rick Haynes said that the Yukon location provides the blueprint by which older locations will be renovated and remodeled, starting with the Northwest Expressway location, which was recently demolished and will be rebuilt by March 1.

“We’re excited to still continue to grow,” Haynes said. “We feel like when you rebuild and you’re new and fresh, it draws attention.”

Haynes sold the property on which the Northwest Expressway location stood to a developer, who has split the development, and the new Johnnie’s will open next to a Del Taco next spring.

Also, a new Johnnie’s Express will open in Midwest City at 6825 SE 29th St. by early October. While the full-sized charcoal broiler serves its meals on porcelain plates with real glassware, the Express locations operate more like fast-food service with drive-thru windows.

The decision to open an Express location versus a full-sized one comes down to space. Haynes said that they’d prefer to only open large stores, but if a high-traffic location is available only as a smaller property, it will be targeted for an Express location.

“They can do a lot of business even though it is a smaller footprint,” Haynes said.

The Midwest City location will be the fourth Express location, a concept that launched not long after the turn of the 21st century. Express locations also differ from full-sized locations because they serve breakfast, which is something Haynes wants to keep as a distinction.

“Breakfast is easier to handle at the Express because [the footprint] is smaller,” Haynes said. “We do most of the breakfast service through the drive-thru window.”

The breakfast menu is streamlined; the most expensive items are a chicken-fried chicken biscuit for $3 and granola served with milk for $3.79. Haynes said he is fond of the homemade cinnamon rolls.

When the Midwest City Express location opens this fall, there will be a total of 11 restaurants in the Johnnie’s footprint, including the sports bar concept Urban Johnnie Bar and Grille, 121 NE Second St., which has been successful. Haynes said he is a fan of the concept, but he has no plans to open another Urban Johnnie location.

Looking into the future as Johnnie’s celebrates its 50th anniversary in 2021, Haynes said he is focused on filling out locations in the Oklahoma City metro area. He is eyeing a potential Express location in the Midtown district, which is full of sit-down restaurants but is lacking a quick-service restaurant.

Johnnie’s Charcoal Broiler turns 45 years old
Johnnie's hasn't changed much in the last 45 years, but with signature burgers and innovative new ideas, it will be around for years to come.
By Greg Elwell
Food Features

The only other spot for growth Haynes sees is for a potential full-service location to open in Norman, which currently only has an Express.

“Our long-term goal is to change the existing ones and then add Midtown,” he said.  “Something else might happen, but that takes care of Oklahoma City from Edmond to Norman. I could probably do a full-size one in Norman.”

The ownership group opened a variety of other concepts over the years including a steakhouse, and sold West, 6714 N. Western Ave., to Provisions Concepts in 2017. Haynes tried the franchise model with a pair of Johnnie’s Charcoal Broiler locations in Tulsa in the 1990s, but it didn’t stick.

“I doubt it will go out of the Oklahoma City market,” Haynes said. “We did franchises in Tulsa and didn’t care for it. At my age, I want to enjoy life a little more. It’s a tough deal to do. I find it is better for controlling what we’re doing.”

"Someone copying you is the best compliment."—Rick Haynes tweet this

Quality control is important to Haynes because he wants items to be prepared the same way they were when his father opened the first store in 1971. Hand-battered onion rings, soups, signature dressings and sauces are made in-house.

The Theta burger dates to the original Split-T and has spawned many imitations across the state, but its true origin story might be lost to time. One popular rumor is that the burger topped with cheese, hickory sauce and pickles was so popular with the Theta sorority at University of Oklahoma that it gave it its name, which Haynes said is likely apocryphal, but couldn’t say with certainty.

“I don’t think that is a true story; I think there is more to it,” Haynes said. “I can’t really tell you the story because when my dad opened, I was only 13 in 1971. I was going to interview the original Split-T owner Vince Stephens after my dad passed away to get more history, but he died before I was able.

“The original owner doesn’t really have any surviving family that would know that story as well. There are a lot of wannabes — and I don’t mean that the wrong way — that don’t make their own dressing. There are a lot of Theta burgers out there that don’t use hickory sauce, they use barbecue, which is fine. Someone copying you is the best compliment.”