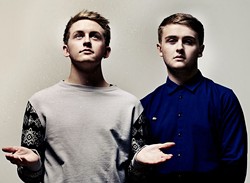 Released in 2013 to near universal acclaim, Settle combined a strong sense of pop song structure and dynamics with the propulsion of Chicago house music, a combination reflecting the studies and taste of brothers Guy and Howard Lawrence, who debuted as Disclosure in 2010. While the brothers were still teens, they studied diverse strands of music ranging from Claude Debussy to J Dilla, but the Lawrences, who perform 8 p.m. May 13 at The Criterion, 500 E. Sheridan Ave., built much of their sound from classic pop and American club music of the 1980s and 1990s.

The duo’s earliest exposure came from songs they recorded in their father’s Surrey auction house in 2010 and uploaded to Myspace, which resulted in Disclosure’s contract with PMR Records. Initial singles such as “Carnival” and “Offline Dexterity” gained traction at clubs, but Disclosure broke through in 2012 with its remix of fellow PMR artist Jessie Ware’s “Running” and then hit hard with “Latch,” its 2012 single featuring Sam Smith.

Smith was relatively unknown at the time, but “Latch” launched the singer into the upper echelon of British pop music and provided the first taste of 2013’s Settle, an instantly engaging album that earned a 9.1 rating from Pitchfork, which declared that Disclosure “have not only made 2013’s best dance record so far — they’ve also concocted one of the most assured, confident debuts from any genre in recent memory.” “Latch” was followed by other omnipresent dance hits including “White Noise” featuring AlunaGeorge, “You and Me” with Eliza Doolittle and “F for You” featuring Mary J. Blige and a featured set at 2013’s Coachella Valley Music and Arts Festival.

Disclosure’s exposure continued with last year’s follow-up, Caracal, and while the slightly mellower album did not achieve the ubiquity of its predecessor, the Lawrences still amassed several U.K. radio hits, including “Omen” with Smith and “Magnets” featuring Lorde. The duo’s latest single is “Nocturnal,” a collaboration with Abel Tesfaye, aka The Weeknd.

Depending on the live setting, Disclosure can pull its superstar collaborators onstage, like the Lawrences did with their performance this season on Saturday Night Live, but in most cases, they make up for the lack of present and accounted for guest vocals with an intriguing mix of digital effects and live performance. Howard Lawrence handily delivers vocals on songs like “F for You” while Guy Lawrence triggers samples and pounds the drums. Meanwhile, the duo calls up vocal tracks from Smith for “Omen” and “Latch” and punches up a laser projection that lip-synchs along with the tracks. Expect constantly flashing lights and appropriate effects during “When a Fire Starts to Burn,” and then watch Disclosure burn all night.