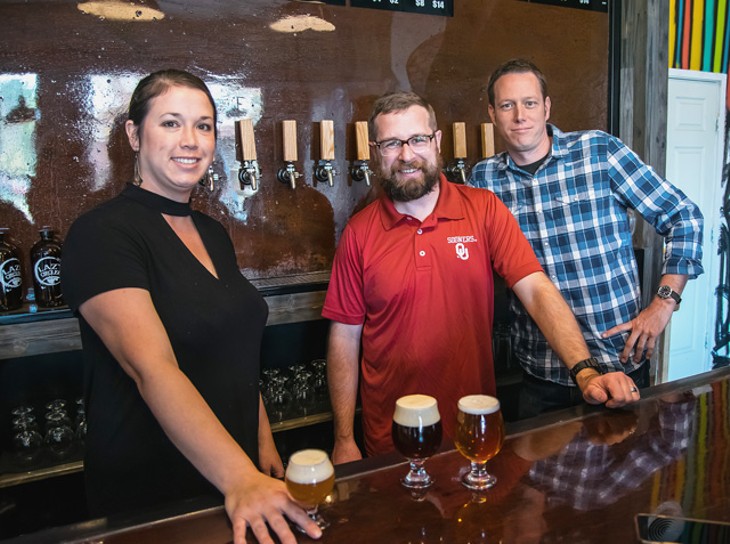 The reason for opening Lazy Circles Brewing was simple enough.

“We just thought our town needed more breweries,” said Stephen Swanson, taproom manager at Lazy Circles, which opened last month in Norman. “We always kind of thought it would be a cool thing to do, and it was one of those things where the urge to open a brewery overcame the, I guess, common sense not to.”

The reasons not to brew his own beer began adding up since Swanson got a one-gallon brew kit from his wife Holly as a Valentine’s Day gift. Though Swanson, who previously worked as a bartender at McNellie’s The Abner Ale House, had been interested in the process of brewing beer, he soon found it to be more trouble than it was worth.

“You have to meticulously clean everything,” Swanson said. “All the equipment, all the instruments, everything has to be cleaned and sanitized and if you’re not sure, you gotta sanitize it again. Not to mention that, to make five gallons of beer, you’ve gotta start out with seven or eight gallons of water and 20 pounds of grain or something like that, depending on the recipe. So it’s heavy. There’s a lot of picking up and putting down. A brewing day for a five- or 10-gallon batch is gonna take you six or seven hours. You kind of get bored or you get frustrated, especially when you’re new to it. And if you do it by yourself, you’re kind of wondering, ‘Am I doing this right?’”

After realizing the batch might take a month to ferment before it could even be taste tested, Swanson decided he was better off just making a trip to the corner store.

“I kinda stopped doing it because it was labor-intensive,” Swanson said, “and after you wait four to six weeks to get your bottle-conditioned beer — and sometimes you’d maybe get three six-packs, 18 beers, and you’re like, ‘This is more work than it is just to go buy somebody’s beer that tastes better than mine.’”

So when brother-in-law Stephen Basey asked him if he’d like to start brewing beer, Swanson wanted to make sure he wouldn’t be in it by himself.

“I said, ‘You know, I’ve brewed a few batches of beer and it’s really fun if you have people to do it with you, but it kind of sucks if you’re by yourself ’cause it’s so much work,’” Swanson said.

But he realized having a brewing buddy made all the difference.

“If you have a friend there, you get to drink beer while you do it and you only have to do half the cleaning and you can bounce ideas off each other and you feel a little bit more confident about things you’re doing,” Swanson said. 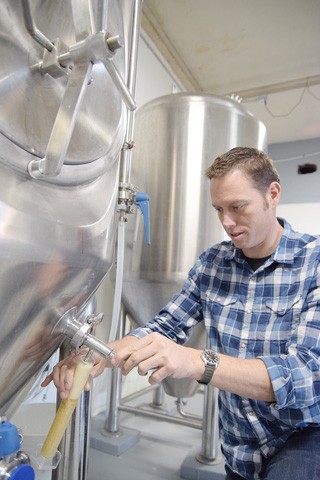 Swanson said he and Basey began making their own batches of beer about four years ago, working from out-of-the-box, simple recipes.

“We bought some kits and we started brewing with really basic, really easy ones, the beginner ones,” Swanson said. “It wasn’t long before we all wanted to progress and brew our own recipes and get out of just remaking something that came out of a box.”

After reading articles on small-scale breweries in Colorado, some of which brewed only 10- to 30-gallon batches, Swanson said he realized breweries could be operated at a “very small scale.”

Lazy Circles Brewing, which operates on a five-barrel, 150-gallon system, opened Nov. 17 at 422 E. Main St. in Norman with five beers available on tap: a 9 percent stout, a “robust” porter, a “hoppy” red ale, an American-style pale ale and an India pale ale. Swanson said the brewery will soon expand the menu to include eight to ten beers, including a New England-style IPA he describes as “tropical,” with more of a cloudy color and “creamy” texture. Even if the brewery is bigger than some of the small Colorado operations that inspired it, Lazy Circles is still a modest, family-owned operation with Swanson as taproom manager, his wife Holly as business manager and Basey as brewmaster.

“We’re probably the smallest if not the second-smallest brewery in all of Oklahoma,” Swanson said. “We’re still really small.”

Though the menu is expanding, Swanson said the brewery is still mastering the basics.

“We always wanted to prove that we could brew good, traditional beers, so right now, you won’t find a lot of super-experimental beers in our taproom,” he said. “We’ll start mixing in the stuff we want to experiment with down the road.”

Lazy Circles takes its name from the lyric in the title song of the Rodgers & Hammerstein musical Oklahoma! in which a hawk draws “lazy circles in the sky.” Swanson said the hawk is the brewery staff’s spirit animal. The establishment currently offers beer on tap and also to-go growlers. The beer is only available at the brewery for now, but Lazy Circles plans on opening up distribution to other businesses next year, depending on state laws. Even though they’ve gone into business together, the Lazy Circles attitude is still the same as it was when Swanson and Basey first began brewing beer together as a pastime.

“We say in the craft beer scene,” Swanson said, “‘It’s like an excuse to have drinking as a hobby.’”