Carpenter Square Theatre explores the aftermath of violence in The Lonesome West. 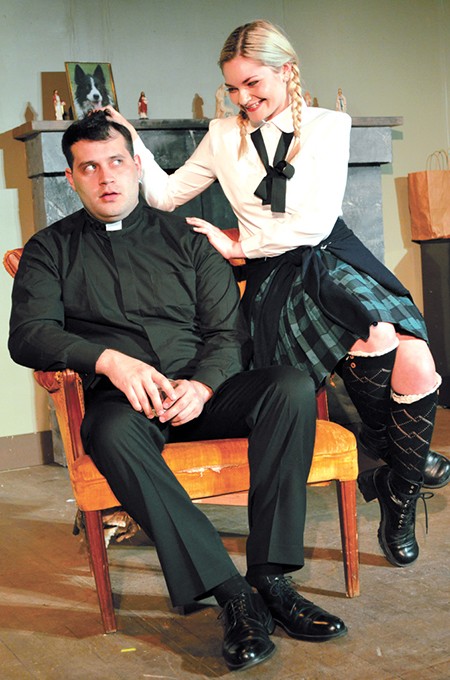 Other than the town priest, practically no one in Leenane believes that Coleman Connor shot his father on accident.

“Everybody knows he did it on purpose, ’cause his dad was a mean old SOB and probably deserved it,” said Rhonda Clark, artistic director at Carpenter Square Theatre, which begins staging a production of the darkly comedic play The Lonesome West on Friday.

Written by Martin McDonagh — screenwriter and director of films including In Bruges, Seven Psychopaths and Three Billboards Outside Ebbing, Missouri — The Lonesome West chronicles the ongoing and often violent feuding between Coleman and his brother Valene, recently complicated by Coleman murdering their father for making fun of his hair.

Clark has previously directed two other McDonagh plays for Carpenter Square: The Beauty Queen of Leenane in 2001 and The Cripple of Inishmaan in 2004.

“I really have an affinity for his odd characters,” Clark said, “and he inferred to a degree during this time that he was writing these, he said Quentin Tarantino was kind of his hero in a way, but we’re talking back in the ’90s. This play’s set in 1997, so we’re talking about 20 years ago, and he inserted some interesting violence into some of his plays, just like he does in his movies. He has a unique look at human nature; I’ll say that.”

Some of McDonagh’s plays are so violent, Clark said, that staging them can be difficult or even dangerous. A few years ago, Clark was considering staging McDonagh’s The Lieutenant of Inishmore, which features fake blood and limbs and firing blanks, but she decided against it when she realized what an ordeal it would be for the crew.

“I went online and I actually just did a search of ‘cleaning up after The Lieutenant of Inishmore,’” Clark recalled, “and sure enough, a stage manager or a technician had done a blog about working on a production of The Lieutenant of Inishmore and ... how they had a crew of 10 people and how proud they were when they got the post-show cleanup down to an hour. And this is 10 people cleaning up blood and body parts and whatever, and of course, in the blog he says, ‘Well, the stage really never got clean. There was always a stickiness to it. You couldn’t really clean it after every performance, but at least we got it down to an hour.’”

The Lonesome West is more about the aftermath of bloody brutality, Clark said.

“The worst violence has happened offstage,” Clark said, “although the two brothers scuffle and wrestle and even pull a gun on each other.”

With only a couple of exceptions, the onstage action takes place in a two-bedroom cottage and features four characters: the Connor brothers (Michael Relland and Rick Lockett); Father Welsh, a priest (Matthew Moreillon); and a young bootlegger named Girleen Kelleher (Alexis Perry and Katlyn Skaggs).

Father Welsh attempts to make peace between the two brothers as a way to feel better about the impact he has on the community.

“He’s in the midst of what you’d call a crisis of faith,” Clark said, “because he doesn’t feel like he’s having any positive effect, not only on them but on really his parish as a whole.”

Kelleher, meanwhile, sees a side of the townsfolk they don’t even reveal in the confessional.

“If you were to just see her, you might think, ‘Oh what a pretty, innocent young lady she is, 17 years old,’” Clark said, “but she makes her money selling her dad’s moonshine. So that takes her all over the area, pedaling his moonshine. So she has a real interesting view of everybody and kind of knows everybody’s business.”

Though McDonagh’s plays are often very violent, Clark said they are also very funny, which can be a difficult balance for the actors to find.

“You can’t go too far one way or another,” Clark said. “You really have to walk the line between humor and drama, and you can’t let one overpower the other.”

The dark comedic tone of the play can sometimes cause confusion for the actors, who can be unsure about which parts are supposed to make the audience laugh.

Crucial to the successful execution of the play, Clark said, was casting the right person to play murderous but charming Coleman.

“I thought I needed someone who is inherently likable,” Clark said. “I thought that any good actor could bring the believability that he was capable of killing or injuring someone he thought had done him wrong, but if we had an actor with a cold energy, that was something big to overcome. But if you had someone who was just naturally likable, then that really helps, ’cause the audience, I think, should have mixed feelings through the whole thing. While you’re laughing, you should be like, ‘Oh, maybe I shouldn’t be laughing at that.’”

Coleman and Valene’s bickering, forever in a state of adolescent arrested development, is the source of a lot of the humor.

“You know, in so many ways, they’re still those boys that had to share a bedroom and took each other’s things,” Clark said.

The juxtaposition of childishness with extreme violence is a common aspect of McDonagh’s work, which The Independent once compared to a combination of Deliverance and Tom and Jerry cartoons.

“But the one thing I can say is that people like the combination of humor and violence,” Clark said, “if they like the tone of McDonagh’s movies, then they would like The Lonesome West. It’s that same combination of likable characters doing very unlikable things, and it’s pretty funny along the way.”