Lyric Theatre of Oklahoma’s When We’re Gone sets a morality play to a pop-punk score. 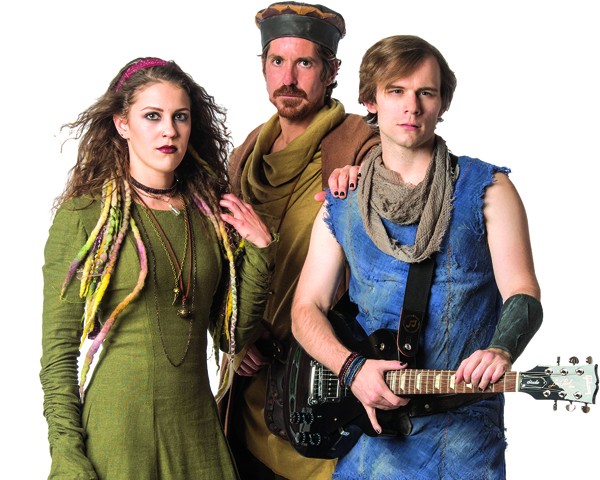 Beginning Sept. 29, Lyric Theatre of Oklahoma will introduce the world premiere of When We’re Gone, a coming-of-age musical with a pop-punk twist. The show is the final production of the 2018 season and runs through Oct. 14.

As part of the New Works Initiative spearheaded by Lyric’s producing artistic director Michael Baron, this is the fifth installation of the series that aims to make Oklahoma a hotspot for musical theater.

While attending the 2016 National Alliance for Musical Theatre’s Festival of New Musicals in New York, Baron came across the work of two young writers in search of someone willing to turn their art into an onstage production. Their timing couldn’t have been better.

“I approached the writers and said, ‘Hey, I loved your show. I think Oklahoma would be a great place to do it.’ And they agreed,” Baron said.

Still, it took some time for the young creatives to get the attention they were looking for. An eight-year work in progress, When We’re Gone originated as a thesis for New York University graduate students Alana Jacoby and Scotty Arnold, who were enrolled in the theater writing program. They also attended Yale Institute for Music Theater, a now nonexistent two-week workshop, and eventually they were able to put together self-produced concert versions of their work.

It comes as no surprise then that the play isn’t the same as it was when they first began writing in the summer of 2010.

“Some of the songs have stayed consistent throughout the years, but all of the pieces around it have changed quite a bit,” Jacoby said.

“We had a great time there,” Jacoby said. “We really collaborated a lot.”

In hopes of leaving the world a better place, the two wondered whether  or not wri-ting a musical would be the best option. Jacoby thought instead to explore “more tangible and real ways to help with the problems we’re seeing” rather than just “sitting down and writing some songs.”
“A lot of these struggles and problems that we’re fighting up against now are the same things that people have been dealing with for hundreds of years.” — Alana Jacoby tweet this

However, they soon realized they could transform this notion into a play that would teach its viewers about the many ways we can make a difference in our own lives as well as in the lives of others.

According to Jacoby, they decided on a protagonist that would be pitted against the biggest problem they could possible think of. Fascinated with the medieval period, they decided to take their audience to 1349 England during a time when the Bubonic plague ran rampant.

But the show is much more modern than might be expected and is likely to be representative of an experience most of us can relate to.

“A lot of these struggles and problems that we’re fighting up against now are the same things that people have been dealing with for hundreds of years,” Jacoby said.

The story centers on a young man named Todd who, according to Baron, is busy “negotiating not only the four people who care about him in his life, but these four iconic priorities that we struggle with today.”

Those priorities — love, service, art and piety — are each represented by a different character. Torn between his love for music and his intense desire to help fight the plague, Todd encounters the ghost of his deceased bandmate John, who proceeds to take him on a voyage of self-discovery.

Though at times the production might appear reminiscent of Charles Dickens’ A Christmas Carol, the production is largely inspired by The Summoning of Everyman, a morality play written in the 15th century.

“It’s a universal story for people who have a quest on what they’re trying to do with their lives. That’s always going to be a universal tale,” said Van Hughes, the actor playing John. “It doesn’t really matter how old you are to see something like that because people may never really get their lives figured out. They’re always trying to find the next new thing, you know?”

Hughes, renowned for his roles in Hairspray and 9 to 5, among other Broadway productions, is a Brooklyn local who came to Oklahoma after accepting the role.

“Anytime you get offered to work on a new show and it’s something cool that you like, you’ve got to take it,” he said. “This just happened to work out in a great way. I was able to come out here and do a full production … really get to go for it full force.”

Though he has been involved in major productions requiring him to act, sing and play an instrument, he described the show as having “a very original vibe to it” and said he hasn’t performed in another show like it.

“Every song propels an emotion,” he said. “I’m figuring out a really neat way to incorporate plague London and the look of that period with today’s rock ’n’ roll.”

He even alluded to a special surprise that might be in store for those who enjoy the show’s musical aspect.

“Honestly if we recorded a rock album of this show right now, I’m sure it would be pretty popular around the country,” Baron said. “The songs are that good and interesting. So I wouldn’t be surprised if that happens quick.”

Though no official plans were announced regarding the future of the play or its cast recording, Baron remains confident there will be other productions around the country. Perhaps one day Hughes will have the luxury of performing it back home.

“You always hope there’s a second life for it, but you try not to jinx anything. You just kind of got to put your nose down and do the work and just hope people respond to it,” Hughes said. “I’m more about the moment.”

And for this moment he looks forward to his return to the stage, giving him another chance to interact with the audience. Acting as the sole narrator, he has the unique opportunity to add a shot of diversity to his performances.

“You really catch people off guard, and you could always be using the audience like a scene partner — taking what they give you and changing how you say it,” Hughes said. “I like that kind of thing. … That’s what makes live theater so great.”

In the mix of the storyline and the excitement, there’s often a very real and very serious idea the writers are hoping to communicate. It’s an idea Jacoby believes is crucial to anyone at any point in life.

“The most important thing is to be true to yourself, to listen to your own voice rather than trying to fit into someone else’s mold or expectations of what your job should be — to really follow your heart and follow your passion,” Jacoby said. “That will lead you towards becoming the best person you can be and helping the world in your own particular way, which will end up being the most valuable way.”