Some dispensaries are reevaluating security measures after a few reported burglaries. 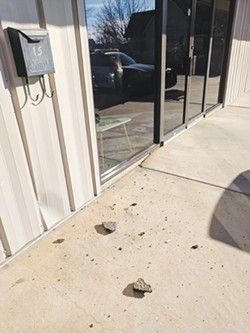 No business is immune to theft, and at least two metro medical marijuana dispensaries have been burglarized since opening.

The most recent reported burglary occurred Jan. 26 at The Peak, 15 E. Fourth St., in Edmond.

“Our manager got to the store and she told us that our doors were pried open, so I said OK and we came over,” owner Corbin Wyatt said. “They tried to break the glass, but the little glass wouldn’t break because we reinforce it using bulletproof and shatter-resistant 3M adhesive. In the lobby, we will put everything back in the safe and secure things with biometric door locks and kick plates and a bunch of other things to make sure they can’t get back there. And the perpetrator wasn’t able to, so he kind of just made off with some of the little display stuff that we had out and that was it. Now, we don’t leave any of it out at all. We used to just leave some stuff in the displays. So I think he made off with roughly $1,000 on our latest calculations.”

“Some were in our little bud boxes, our little bud displays,” Wyatt said. “Another one was just in a little mini jar that we had out. And that one was actually completely accidental. We just accidentally overlooked that one. But if that hadn’t been out, they would have gotten next to nothing, actually. Just grams.

“They were kind enough to not even break them. They just opened them and took them. It was a very polite thief. Our security system did exactly what it was supposed to, and we’re actually now working with the Edmond police department and their detectives to stress test different areas in the store to make sure that we’re amping up security even further from here.”

Wyatt said that dispensaries are alluring targets to thieves because of the way the money is handled.

“Even if you’re doing everything right by the security standards, dispensaries are going to be targets until we’re allowed the same basic business services like banking that other places are,” he said. “Imagine Best Buy. Imagine you have all these great electronics and they can only take cash so they have tons of cash on hand at any given time. That’s everything a thief could ever want, cash and a high-end good. You know, liquor stores do most of their business in credit cards and debit cards, so they’re able to bank most of that money and then at the end of the day or during the day, they put that money in a bank. Throughout the day, we do the same thing. We have five drop times that are all random with incognito people that come and take cash out of all of our stores, but even then, we’re not allowed to go put it in the bank, so it creates a problem over time.”

Police were called to the dispensary about 5 a.m. in reference to a loud alarm and found a glass window on the east side of the business shattered, according to a police report.

The report states security footage showed a man wearing a mask or hooded sweatshirt kick in the door to the back office of the business, shattering the frame, before fleeing the business.

Nothing was taken during the burglary, according to the report.

The dispensary was closed for a few days while repairs were made. Originally a large, open business with one glass door opening directly into the storefront, a wall was erected inside the business creating a waiting room with a glass teller window. An employee now uses a button to unlock a metal door leading into the area containing the products.

Rabbit Hole declined to comment on the burglary to Oklahoma Gazette. Oklahoma City police said that, to their knowledge, it was the only reported dispensary burglary in OKC.

Wyatt said keeping break-ins hush is the norm and many more dispensaries have been burglarized but have not publicized it.

“Vandalism and burglary goes on in Oklahoma City. We have had dozens of dispensaries broken into, some in very, very bad ways because they didn’t invest in good security, and interestingly enough, I think they had said that we were the first to actually report it to the police,” Wyatt said. “We, of course, always have our ear to the ground, and so we hear everything and talk to people about stuff and there have been dozens of dispensaries in the metro broken into in very, very bad ways, and so and we were really surprised that this was so newsworthy for one of our stores to have a minor break-in at night. But then I realized it was because this isn’t something that people actually talk about. Even though we’re supposed to be reporting break-ins and stuff, there are a lot of dispensaries that they’re not doing it. Either they don’t know that’s required of them or they don’t feel the need to report a break-in to the authorities.”

Wyatt declined to name any of the businesses.

“In this industry, especially if people don’t say something publicly, you’re better off not saying it all,” he said. “You have to keep in mind many of the people that have opened businesses right now are people that that have been involved in cannabis for many, many years and so they keep that mindset going into a legal market as well. The one thing that I have not heard of is a daytime robbery, so most of these are nighttime incidents. I have not heard of a single day time robbery.”

"Even if you’re doing everything right by the security standards, dispensaries are going to be targets."—Corbin Wyatt tweet this

The Peak is in the heart of Edmond and just a few blocks from the police department.

“That’s kind of the big shock is that this could happen anywhere,” Wyatt said.

“Most of them are pretty simple and taken straight from Colorado,” said Mark Woodward, Oklahoma Bureau of Narcotics and Dangerous Drugs (OBN) spokesman.

Self-closing doors, a security system and seven-foot fences surrounding outdoor grows are among the requirements.

“The main thing is just they take steps to adequately safeguard against theft or diversion, and that’s kind of what we’re looking for in those rules,” Woodward said. “And we think most of the places are already going to go above and beyond that, just to protect their own products.”