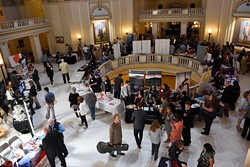 Jessie Showalter took a deep breath before her clear soprano voice rang out with the first line of “America, the Beautiful.”

“I’ve been able to accomplish so much,” Showalter, a two-time member of Oklahoma’s All-State choir program, told Oklahoma Gazette. “The arts have changed my life.”

Three years ago, Showalter and her family moved to Guthrie after a once-flourishing Cashion Public Schools arts program dwindled to nothing. When Showalter was in the seventh grade, financial constraints motivated the school board to eliminate the band program. Other fine arts programs followed, said her father Donald Showalter. He enrolled his daughter in Guthrie Public Schools for the 2013-14 school year.

This spring, the Showalters heard that districts across the state, including Guthrie, were contemplating cuts to fine arts programs. School leaders expect fewer education-earmarked dollars in the wake of Oklahoma’s $1.3 billion budget deficit, which translates to tough decisions on extracurricular programs for the coming school year. With three weeks left in the legislative session, Oklahomans like the Showalters advocated to protect funding to education and the Oklahoma Arts Council (OAC), a state agency that benefits the Guthrie community and countless others through grants to arts groups.

“Arts has so much to offer, and many people don’t realize it,” said Jessie Showalter, who will attend Oklahoma State University on a choir scholarship and plans to major in music education.

In 2014, faced with a $170 million budget deficit, a state lawmaker proposed cutting OAC funding by 25 percent each year until 2018, at which time legislative funding would cease. Arts advocates sounded the alarm on the legislation, and the bill failed to earn a committee hearing.

This year, facing an even larger deficit, lawmakers proposed a comparable approach: Consolidate the agency within the state’s Department of Tourism. The alarm was again sounded and arts patrons gathered May 4 at the Capitol for the annual Oklahoma Arts Day. Rep. Scott Martin, R-Norman, confirmed consolidation suspensions as he addressed guests during the event’s morning welcome. He said OAC’s funding and independence are in danger.

“There will be bills heard in committee in the coming weeks, if not next week, that would consolidate the arts council,” Martin said. “We’ve got to fight.”

OAC influences the quality of life, education and economic vitality of Oklahomans by offering arts education in schools and arts programing in communities. In 2016, lawmakers appropriated $3.405 million to the arts agency, which has seen funding drop the last two years. Currently, 15.5 percent of the agency’s revenue comes from federal sources, which Amber Sharples, OAC executive director, said would be jeopardized if the organization is consolidated.

“Consolidation to another agency would risk federal and regional funding up to $1 million,” Sharples said. “It would impact our ability to serve the state.”

Best known for its community arts programs, Oklahoma Arts Council provides around 500 grants annually to fine arts organizations and schools across the state.  Fine arts organizations in rural communities also benefit from the grants. A loss in state funding could cause them to reduce the number of education programs, performances and exhibits or cease operations altogether, Sharples said.

In 2015, the council awarded just under $200,000 in grants to various Norman-based arts organizations, including the Norman Arts Council. Erinn Gavaghan, Norman Arts Council executive director, witnesses the state agency’s influence daily. At local elementary schools, arts education is offered thanks to a program provided by Norman Firehouse Art Center and funded through the state’s art agency. A collaborative program from OAC and Oklahoma Department of Veterans Affairs brought three arts classes to the city’s veterans center.

In October, downtown Norman, along with OKC’s Plaza and Paseo districts, earned certified cultural district designations from the council.

“That’s a program that could go away under consolidation,” Gavaghan said. “We are just getting started with it. It is so important not only to the tourism industry but the people who live in Norman. We don’t want to see that go away.”