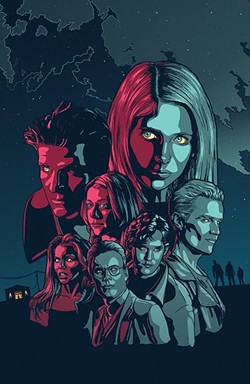 The Bronze is the meeting place for high school characters on the popular television show Buffy the Vampire Slayer, which continues to gain new fans on streaming services a decade and a half after its final episode aired.

For local comedian, musician and teacher James Nghiem, the Bronze signified a place where all of his interests converged.

“I was always into stuff like monsters, vampires, comic books and punk music,” Nghiem said. “If you watch a lot of the Netflix Marvel superhero shows, Buffy did all of that before we thought it was feasible from a special effects standpoint.”

It’s the latest pop culture-based show that Nghiem has organized over the last two years with artist Mike Allen. The duo previously collaborated on shows honoring everything from the video game Street Fighter to movie directors Wes Anderson and Quentin Tarantino, artist Banksy and most recently, a mash-up of Kanye West and the video game Metal Gear Solid.

“We wanted to do a Halloween show that wasn’t just monsters or anything that was ‘normal Halloween,’ and I think Buffy was perfect for that,” Nghiem said.

On the show, which was stylized under the watch of showrunner Joss Whedon (Avengers, Firefly, next month’s Justice League), the Bronze was a setting for both musical acts and hijinks involving supernatural beings.

Just as the Bronze was home to a variety of exploits, the Speakeasy will transform to host music from three bands, LCG and the X, Shut Up Matt Jewett and St. Basic, stand-up comedy, an art gallery, a Tarot card reader, a magician and even a Rocky Horror-esque sing-along, which Nghiem said was inspired by Buffy’s famous musical episode.

“I want every show to have a festival atmosphere,” Nghiem said, noting that the show will fill both floors at the Speakeasy, which will serve special drinks and food for the event.  “There is a segment of people who fly into Oklahoma City, they go to the hotel by the airport, go to Cowboys and think, ‘That’s Oklahoma.’ We’ve got way cooler shit than that.”

Nghiem was inspired to start the mixed-media shows after moving to Los Angeles for a brief stint, where he attended an art show centered on Teenage Mutant Ninja Turtles. When he returned to Oklahoma City, he was inspired to do something similar but wanted it to include music, art and comedy.

Allen joined Nghiem in helping him organize and curate submissions of artwork not long after Nghiem put together H.O.R.S.E., an art show dedicated to basketball. The two became friends, and the concepts began flowing. This is the first show in which Allen wasn’t quite as familiar on a subject as Nghiem.

Allen is watching Buffy for the first time in preparation for the show and adapted the comic style for the use of a poster. 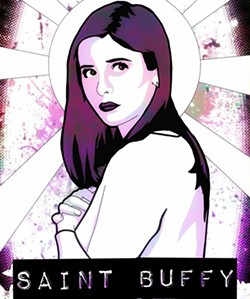 “The first season of the show is very campy, little more cheese than the rest of the show, but it’s very ’90s. What I remember of the ’90s, X-Men and a lot of comics took off at that time. I thought it would be a good aesthetic,” Allen said.

Admission to the show is free, but a $3 suggested donation will be split among the bands. All art sold at the show will include a $10 commission that will be donated to Regional Food Bank of Oklahoma.

Each of Nghiem and Allen’s shows has featured about 30 pieces of art and has included about seven regular artists and submissions from the community.

The Bronze show takes place a week before the Wizard World Comic Con, which features four actors from Buffy the Vampire Slayer: James Marsters (Spike), Nicholas Brendon (Xander Harris), Charisma Carpenter (Cordelia Chase) and Emma Caulfield (Anya). A Wizard World representative will be on hand at the Buffy show, where attendees will have a chance to win Wizard World VIP passes.

After two years of hosting and planning shows every three months, Nghiem said it’s getting difficult to manage between life and professional responsibilities, but he’s encouraged that a few other groups around the city started following the mixed media model.

He said that he has met with multiple groups to provide pointers in organizing shows, including people behind a Tim Burton-themed show at the Speakeasy Oct. 28.

“There are 1.3 million people in the OKC metro area. If you throw a dart at a wall of interests, you’d hit something that would have an audience,” Nghiem said. “We haven’t struck out yet.”

Each show has averaged at least 800 attendees, and Nghiem said the bands that play shows usually see a bump in listenership, and that artists sell pieces of work. He said that even those unfamiliar with the source material still have a fun time people-watching and getting introduced to new faces.

“I want these shows to get so big that is spreads through the ‘Barmuda Triangle’ and over [across the street] to the HiLo and Drunken Fry. I just hope Braum’s doesn’t tear it down,” Nghiem said.

A Night at the Bronze: A Buffy the Vampire Slayer Art Show