Applications to demolish the old police headquarters and former municipal court move forward, but the old city jail’s future is still up in the air.

The old city jail was saved from demolition for now, but there are no concrete plans to move forward with redevelopment.

The resolution to apply for demolition was deferred four times before a decision was made. It was first discussed June 4 and then every two weeks until Aug. 13, with councilmembers disagreeing on the value of saving the building, which would have been demolished to make way for surface parking.

However, on Aug. 13, Ward 6 councilwoman JoBeth Hamon said she wanted to remove the jail from the resolution and move forward with the demolition application for the two other buildings.

“I’m still very interested in striking that item from that resolution and just moving forward with the other two buildings to demolish them,” Hamon said. “I think that we can be creative and find ways to work with this developer and not use city assistance like we have for other projects. I hear from some staff that it’s a difficult project, but I’ve gotten a lot of feedback from people in the community that they are very tired of us losing historical old buildings.”

Marva Ellard, the developer interested in rehabilitating the jail, attended several meetings to continue the discussions. She has been working with Brent Bryant, finance director and economic development program manager, to find a solution.

“I very much would like to continue the discussion to see if we can find uses and an agreement on this building to keep this building standing. Mr. Bryant and I have been working on some proformas the past few days, and I think they still need some work, but we have been in discussion on some uses and potential income sources on that building,” Ellard said. “We’ve never really determined what uses might be agreeable to the city.”

The six-story jail has only one working elevator, according to the resolution. The first two floors have at least 8-foot ceilings while the rest of the floors’ ceilings are only 6 feet 10 inches high. The resolution also states that as the building has sat vacant, pigeons and other animals have made it their home.

Some councilmembers said this restricts much of what could normally be done to redevelop a facility like it, but Ellard and Hamon both said they can find a creative solution.

"I very much would like to continue the discussion to see if we can find uses
and an agreement on this building
to keep this building standing."
-Marva Ellard tweet this

The jail, 200 N. Shartel Ave., was built along with Civic Center Music Hall, City Hall and Oklahoma County Courthouse. Greenwell recommended the city create walking tours for the other two buildings to honor the history and architecture and to move forward with the jail’s demolition. But Hamon said she wanted to strike the resolution to avoid having the same discussion every council meeting and allow more time to work out a solution.

“I appreciate that this has been an ongoing discussion, but council’s changed, we haven’t been a good steward of our old buildings in the city, and the fact that we have a city-owned building that former council has just decided is not a priority is not to me a good reason for us to just throw up our hands and say, ‘Well, I guess we just gotta give up now,’” Hamon said.

Greenwell made a motion to approve the resolution. However, an amended motion was made to vote on the jail separately from the two other buildings.

“We could keep this discussion going for eight hours,” he said. “My mind is made, and any further discussion or additional information brought forward isn’t going to change my mind. So we can continue this discussion as long as you all want to, but I’m ready to vote on it.” 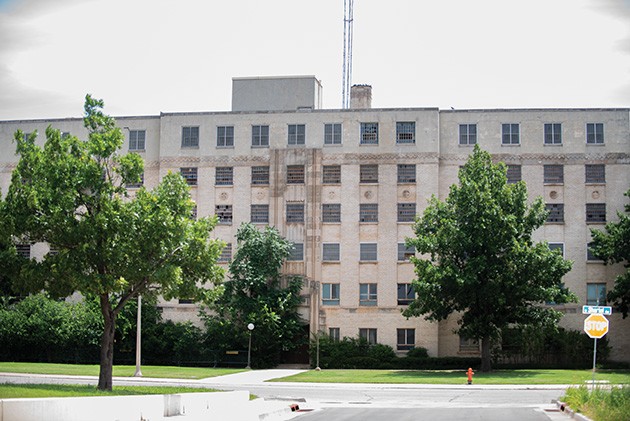 In the past, Ellard told Gazette that the main roadblock for her to move forward was finding a use for the building that the city would agree on. She said the building needed a champion because the history was important.

“It’s a major part of our history as a city … and of course it’s a critical part of the history of the Oklahoma City Police Department. Once it’s gone, it’s gone,” she said. “No future development opportunity is going to replace the history that that building signifies, so we should take advantage of the opportunities that we have to make that a viable, visible part of our history going forward.”

After the meeting, Hamon said via Twitter that she didn’t like the idea of demolishing the two buildings but felt like she needed to choose her battles. She then tweeted about the history of the jail, which is where Clara Luper and others who participated in sit-ins where jailed.

Both Ellard and Hamon told Oklahoma Gazette that there have been no updates since Aug. 13, but they are dedicated to continue working with all parties to find a way to preserve the building. Hamon invites any ideas, resources or investors to email ward6@okc.gov.