Bull riders buck their way into OKC for elite series 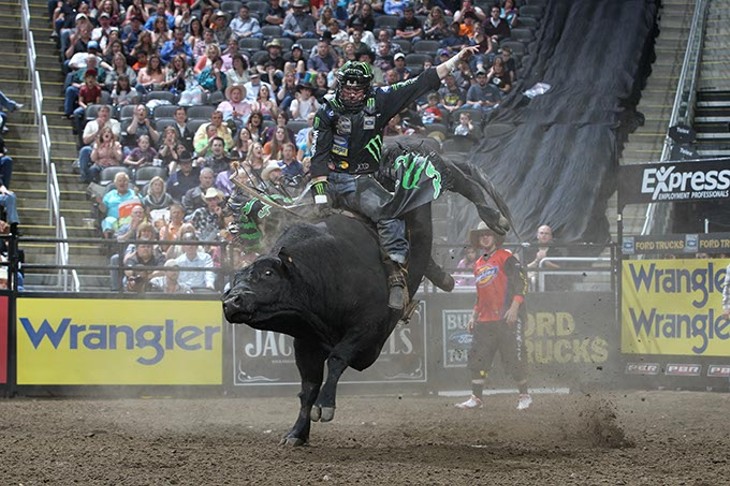 If you’re a professional bull rider, you’re going to get injured. It’s not a matter of if, but when.

“It’s the most dangerous sport in the world,” said pro bull rider and Porum resident L.J. Jenkins. “You can’t go your whole career and not get hurt.”

One of the worst injuries of Jenkins’s career occurred during a 2006 Oklahoma City event when he got stepped on by a bull, breaking ribs, bruising his liver and puncturing a lung.

Jenkins and the rest of the world’s top 35 bull riders are back in town Jan. 23 – 25 as the Professional Bull Riders elite Built Ford Tough Series heads to Chesapeake Energy Arena for its 15th appearance in OKC. The action begins 8 p.m. Friday, 7 p.m. Saturday and 2 p.m. Sunday.

At 27, Jenkins has seen the sport grow during his 11-year career, with the PBR now selling out Madison Square Garden in New York and holding events at AT&T Stadium, home of the Dallas Cowboys. Oklahoma City has always supported pro bull riding and the fans here are savvy and knowledgeable, he said.

“They know a good ride when they see it,” he said.

After battling shoulder and groin injuries last year, Jenkins picked up seven top-10 finishes and two top-five finishes, including a win in his hometown of Springfield, Missouri, where he led the event from start to finish for his first BFTS win in two years. Jenkins qualified for the season-ending PBR Built Ford Tough World Finals 10 times during his career, and he won that event in 2006. He finished third in the PBR world standings in 2012, his best-ever finish, and he has seven career wins. His $2.26 million in career earnings is good enough for 12th on the PBR’s all-time money list.

“I’ve had a great career,” Jenkins said. “It’s been an awesome time. Everything I have is because of PBR.”

Growing up in Missouri and attending the same bull riding school as legends Luke Snyder and Matt Bohon, Jenkins has been around the sport most of his life. He was home schooled his final year of high school so he could compete in PBR events, and one of his most memorable rides ever was as an 18-year-old rookie when he rode Reindeer Dippin’ (2013 World Champion Bull Bushwacker’s dad) for 93 points in his second-ever BFTS event in Laughlin, Nevada.

As Jenkins enters the twilight of his career, he has entered the breeding side of the sport. He bought a ranch in Porum, near Lake Eufaula, on the Internet five years ago after seeing it only twice in person, and he owns about 120 cows and about 50 bulls. One of his bulls, Black Diamond, has competed in the PBR world finals, and he plans to build his bull program once he retires.

Top bulls, such as the now-retired Bushwacker, command top-dollar stud fees, but genetics is not all it takes to make a great bucking bull, Jenkins said.

OKC is the fourth stop on the 2015 BFTS schedule, which will conclude at the world finals in Las Vegas in October, when the world champion will receive a $1 million bonus. In 2015, a new point system has been adopted that will reward riders who perform at the highest level both within individual events and throughout the season.

Jenkins and other pro bull riders will participate in promotional events before the event. Jenkins will meet fans during an Oklahoma City tour on Jan. 22, beginning at 10:30 a.m. at Langston’s, 2224 Exchange Ave. in Stockyard City.

Fans can see pro bull riders, including Jenkins and Cord McCoy, and local media personalities and contest winners participate in a shooting competition during the PBR Wild West Challenge at 11 a.m. Jan. 23 at Big Boys Guns & Ammo, 8620 SW 74th St. PBR bull Barney will also be on hand, and an autograph and photo session will follow.