Oklahoma has a hamburger culture unique to the country, whether it is an El Reno-style onion burger or a Theta or Caesar burger that started at the old Split-T.

Burger Week is as simple as enjoying a meal away from your home or office. A few participating locations will roll out menu specials, but you can participate in the Gazette’s social media-driven photo contest to be automatically entered to win prizes.

Simply tag @okgazette on Facebook, Twitter or Instagram with hashtags #OKCBurgerWeek and #OKCFoodWeek with a picture of your meal. A new winner will be chosen every day of Burger Week.

Tucker’s Onion Burgers (four locations) and S&B’s Burger Joint (10 locations) are two of Oklahoma City’s most successful hamburger purveyors specializing in onion burgers. It might come as a surprise that they both use Angus beef from Creekstone Farms in Wichita, Kansas, but they have slightly different takes on how to cook an onion burger.

The first S&B’s began during a backyard conversation between Shannon Roper and Bryan Neal. In the mood for an onion burger, the friends went to the now-defunct Abraham’s Western Cafe, and it inspired the two to wonder if they could do something similar.

“We decided to just do the Oklahoma onion burger with the best possible ingredients.” — Keith Paul tweet this

Roper, who grew up in El Reno and had a background in restaurant, was looking to get back in the kitchen after finding success with a landscaping business due to back surgery. Neal owned Electro Lounge, and when they added a flattop to the bar, Roper handled the burgers and Neal worked front-of-the-house starting in 2009. Guests had to be over 21 years old to enter during its first six months.

Over that period, Roper and Neal worked seven days a week from morning until 2 a.m. at Electro Lounge before hiring another employee, serving full-sized burgers and sliders with inventive toppings, but its base was onion burgers. The old-fashioned deluxe cheeseburger remains its top seller to this day.

S&B’s uses the “smash” burger technique popularized by the Smashburger chain and In-N-Out. If you were told early in life that a burger shouldn’t be pressed while cooking or it will lose moisture, this is true, but not if the patty is smashed when immediately added to the grill. The Maillard reaction caramelizes the meat and seals in juices. 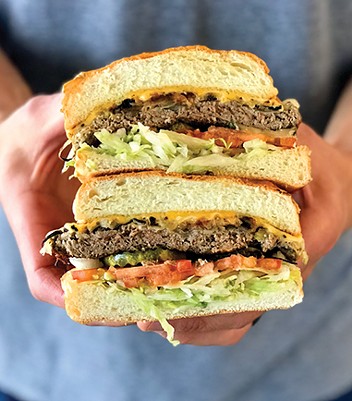 The first Tucker’s was opened at 324 NW 23rd St. in 2013 by A Good Egg Dining Group. Keith Paul, the restaurant group’s CEO, said that the focus for Tucker’s was to honor Oklahoma’s most popular and unique dish, the onion burger.

“Instead of going with something that was a lot of extra toppings, we decided to just do the Oklahoma onion burger with the best possible ingredients,” Paul said.

Because Tucker’s has a streamlined menu, it means the grill can be kept at optimum temperature to achieve its desired onion effect, which is much darker than S&B’s, for example.

“Most of the cooking time [70 percent] is done with the patty on top of the onions,” Paul said. “There is a fine line. Some people think the onions are burnt sometimes because they’re looking for a sautéed onion. People that know onion burgers love it. We have to walk a fine line there; we don’t want to burn the onions, but you eat with your eyes sometimes, and it is tough.”

Tucker’s will be offering the Star Burger during Burger Week, which tops the traditional burger patty with jalapeño cheddar sausage, cheddar cheese and barbecue mayonnaise.

One of the biggest burger trends in the country doesn’t actually involve meat. The expansion of the Impossible Burger — a plant-based burger laboratory-designed to mimic beef — has been added full-time to menus both at Tucker’s and S&B’s.

Paul said they contacted Impossible Burger through social media and had it on their menu within a month. They sold about 1,000 Impossible Burgers across four stores in the first week, and it has stuck.

S&B’s has added it full-time at the original 5929 N. May Ave. location, but it will not replace The Skinny, a house-made veggie patty, on the menu.