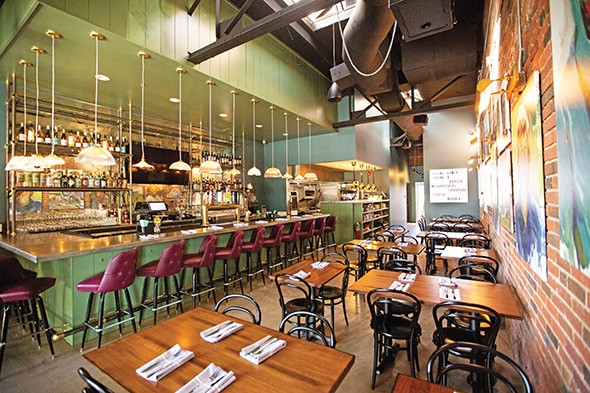 New State Burgers & Spirits, the newest restaurant in 16th Street Plaza District, is the culmination of friends who grew up in Oklahoma’s burger capital behind the slogan, “For the people.”

The phrase appears on kitchen uniforms and throughout the restaurant. Friends Chris Gomez, Jordan Harris and Tyler Maune grew up in El Reno, home of the onion burger, and always thought about getting into the restaurant business. They brought in managing partner Jay Iaquinta, and with the help of chef Robert Black’s consulting company Spring Board, the concept opened at 1705 NW 16th St. last week.

“Burgers were a big part of why we’re doing this,” Maune said. “It was a way of life growing up in El Reno.”

But even though they grew up surrounding by onion burgers, they are not featured on New State’s menu, and it has more to offer than burgers.

The signature burger on New State’s menu is two thin patties covered in cheese and topped with dijonnaise and pickles. Diners have the choice to add thick-cut, maple-smoked bacon and an over-easy egg for a fully loaded option.

The Hot Hamburger is an open-faced burger topped with cheese, fries and brown gravy in honor of Murphy’s Original Steak House in Bartlesville. In a similar vein, the gravy fries use the thick-cut maple bacon for lardons and are topped with a sunny side egg. The smoked pork belly also makes an appearance on a BLT with tomato confit.

There is a black bean burger for vegetarians, and The Statesman is a housemade roast beef sandwich topped with American cheese, crispy shallots and garlic aioli with enough of its own juices that it becomes its own au jus while keeping the toasted bun crisp.

For dessert, New State offers a Brookie, a mashup of a brownie and a cookie, a draught root beer float and a Peisenberg Pie, which is inspired by New York chef Christina Tosi, who made the Milk Bar Pie popular under its previous Crack Pie name. It has an oat cookie crust with a filling that has two types of sugar, whipping cream, butter and egg yolks.

The ownership group signed a lease for the New State space last year and went about converting the former Collected Thread store into a kitchen.

"We’re going for a modern diner."
— Chris Gomez tweet this

“[Collected Thread] was an important part of what the Plaza District has become, and they got the momentum started,” Gomez said.

The 1,250 square-foot space has fewer than 20 tabletops and a 14-seat bar with nine taps for local craft beer.

While the rest of the restaurant industry is gravitating toward counter service, New State places an emphasis on full service and quick execution of its streamlined menu.

“We want to be motivated by making it a fun atmosphere for our staff and for our guests,” Iaquinta said. “It’s going to be a high-energy, fun place to be, whether you’re working or eating. We don’t want anyone to walk in and be confused if they’re dressed enough; it’s not that kind of place. It’s a come-as-you-are.”

Gomez said it is the kind of restaurant where someone who is in the neighborhood after a run in yoga pants and a tank top can stop in for a beer, or it can be a date night destination. 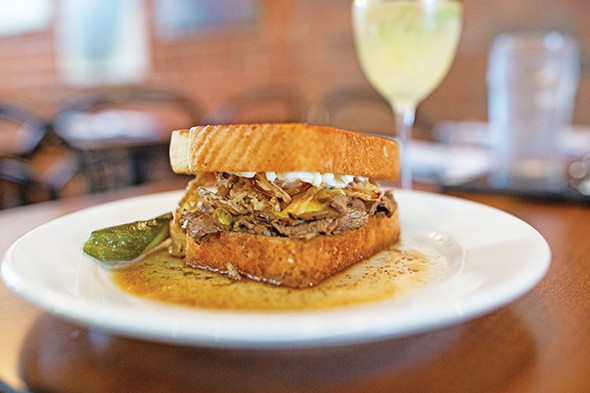 “I know the industry is moving that way and counter concepts and delivery are growing,” Iaquinta said. “People are finding a way to devalue service. I don’t think that’s because it’s what consumers really want. I think it’s because of the product. I think the service product has suffered and consumers reacted to that.”

The Apple Jack Punch, which is made with clarified milk punch, leads nine cocktails on the menu. It requires an involved, three-day process to make the milk punch. The staff adds citrus to heated milk and watches as the milk curdles and separates from the clear liquid. The remaining milk is infused with absinthe, rum, Pernod and bitters. It is topped with Kellogg’s Apple Jacks cereal and a pineapple leaf.

There are nods to the recently traded Thunder legend Russell Westbrook with the drinks Why Not, which consists of Elijah Craig small batch bourbon, dry curacao, lemon and maple, and Next Question, which is bartender’s choice.

Other cocktail options include the Moltisanti, which features grapefruit gin, Aperol, St-Germain liqueur and grapefruit seltzer; the Gomez with pisco brandy, apple, grapefruit and lime; and the Ellsworth with Bulleit rye, fig, orange juice and bitters.

The interior is exposed brick lined with prints of art that include something with graffiti-style messages that will increase over time.