Burgers are the star, but Nic’s Place has much more to offer diners 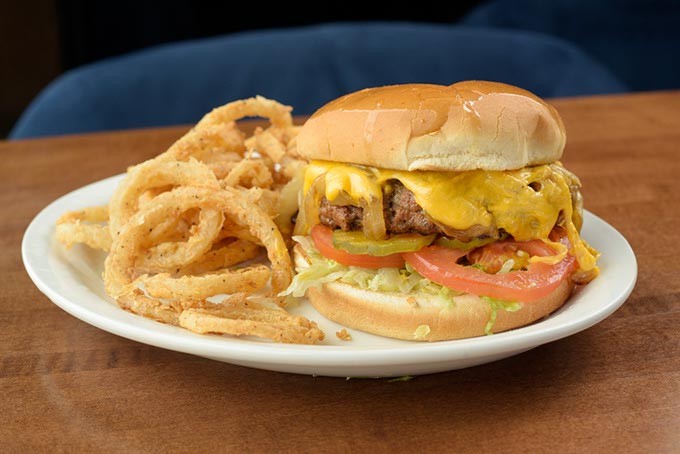 Oklahoma Citians, you know good burgers. But anybody who wanders into town and asks for the best burger around will invariably be pointed in the direction of Nic’s Grill, 1201 N. Pennsylvania Ave. The only problem with sending people to Nic’s Grill is that it’s little more than a counter with about 12 seats to go around.

Even on dreary, rainy days when the wind kicks up and the air stings their faces, you can still find a line out the door.

Owner Justin “Nic” Nicholas could have kept things the same and enjoyed the distinction of having one of Oklahoma City’s most sought-after dishes. Or he could have opened a larger burger place and taken in all the money.

Instead, he opened Nic’s Place Diner and Lounge, 1116 N. Robinson Ave. He’s not eschewing past successes — he still works the flat-top griddle at Nic’s Grill for lunch every day — but he is trying something new.

There’s little tying the new and old restaurant exteriors together besides the name, and inside, the difference is even starker.

There are chairs and a little bench in the waiting area, and a sign asks diners to wait to be seated at a table. The rooms vary wildly, too. The north dining area has more casual chairs, while the south has marble-topped communal tables, padded booths and a banquette. And downstairs is an entirely different beast — a cool, dimly lit lounge with a classy bar; an obscenely large TV surrounded by couches; and a row of private booths for those wise enough to reserve the space for the evening.

Of the three, I prefer the lounge. It has a feel like none other in the metro: quiet, insular and secret.

If you’ve been denied a Nic’s burger in the past, either by dint of time or distance, that’s what you must order upon your first visit.

Nic’s Original ($11.25, including a side) comes with lettuce, tomato, pickles, grilled onions, American cheese, mayo and mustard and is what you would get at the other restaurant, but it’s worth exploring other options, as well.

I thought Old School ($11.25, including a side) was a better vehicle by which to taste the component pieces of a Nic’s burger with just mustard, pickles, grilled onions and American cheese. Each one of these is close to a half-pound of beef in a hand-formed patty cooked through on the griddle.

Nic’s grilled onions are key. They spend hours on the grill, melting into the heat as they’re basted with butter. The best ones are deep brown, sweet and so tender they blush if you give them a compliment. The bun is a mere formality, and Nic will tell you as much. It’s there to get the burger and toppings to your mouth. If it falls apart, well, use your fingers. It’s worth it.

As sides go, the fries are great, but I think the haystack onion rings are the belle of the ball.

But Nic’s Place does so much more than burgers. That’s why I’d point you toward the chicken-fried steak dinner ($14.25 with salad and side).

Do not go in expecting a deep-fried steak with tons of crispy crunch. This is more what I could categorize a “country-fried” steak. Rather than going into a vat of bubbling oil, this steak is dusted with flour and seasonings and fried on the griddle.

I was given a steak knife as a practical joke, since this steak came apart simply by spearing a piece and pulling it away. And while many chicken-fried steaks are mostly breading with a little meat inside, Nic’s is the opposite.

Seasoning can be an issue, so maybe let your server know that you’re not allergic to salt and/or pepper and you’re happy to trust the chef’s use of both. It comes with cream gravy, but you won’t need it on the steak. Actually, the mashed potatoes don’t need it either, but the combination is quite pleasant.

Just stopping in for a drink and want something to nosh on? It’s hard to go wrong with loaded potato boats ($9) or fried pickles ($7), but I ate the bacon-covered deviled eggs ($8) like a monster. With solid whites; creamy whipped yolks; and plenty of crispy, chewy bacon pieces strewn about on top, this is a good dish to share with friends, — conceivably. I wouldn’t know because I ate them all myself.

One glaring problem with Nic’s Grill is that it’s closed on weekends. That isn’t the case with Nic’s Place, where Sundays are for fried catfish ($14.85). Nic likes them simple and balanced, and I bet you will, too. The filets are thick enough in the middle to hold some moisture, with edges thin enough to gain that all-important crispiness. The crust is just cornmeal and seasonings, which is delightful. The hushpuppies that come with the catfish might be the best I’ve ever had.

On special nights, the restaurant serves prime rib ($28, including salad and two sides) that is absolutely wonderful. There’s a lot of fat, which is standard, but the flavor of the roasted beef sends my head spinning and my heart skipping. It’s ultra-tender meat, almost silky-smooth, and the accompanying au jus and horseradish sauces are welcome, if unnecessary.

Nic’s Place would be a hit if it served nothing but burgers, but it’s more ambitious than that. It’s a physical manifestation of Nic’s dream restaurant with great food, a cool atmosphere and one of the nicest bars in town. Go in and I bet it’ll be your place soon, too.

Print Headline: Nic’s time: Burgers are the star, but Nic’s Place has much more to offer diners.

What works: Burgers, catfish and prime rib are spot-on. What needs work: Cooks can’t be so timid with seasoning. Tip: Reserve ahead if you want one of those cool private booths downstairs.