Business leaders come together to promote inclusion and diversity 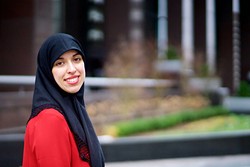 Following a successful event focused on improving inclusion and diversity efforts, a group of Oklahoma City business leaders plan next steps, including forming a consortium.

The meeting 11:30 a.m. June 29 is a follow-up to the Inclusion & Diversity Summit held April 25. The location will be announced soon, organizers said.

A survey of the summit participants showed a strong commitment to diversity and inclusion in workplaces, said Tahira Taqi, an account executive at Schnake Turnbo Frank, the consulting and public relations firm that organized the event.

Among the 93 people who responded, more than 75 percent said their organization leaders had dedicated efforts to improve diversity and inclusion.

“We’re hoping to spur an ongoing dialogue that goes beyond the efforts of each organization,” she said.

Organizers hope that an inclusion and diversity consortium will emerge soon, but Taqi said they also want to make an immediate impact.

“We’re encouraging people to share best practices and network,” she said. “If one company is having a hard time with middle managers committing to internal inclusion and diversity initiatives, maybe someone else will have a suggestion.”

Efforts in Oklahoma City will benefit from those at Hallmark, which summit speaker Michael Gonzales highlighted.

Gonzales, the company’s director of diversity and inclusion, described the success of the conversion of a Hallmark display in a Walgreens in San Francisco to focus on cards relevant to the predominantly LGBTQ Castro neighborhood that the store serves.

That initiative came about after Walgreens notified Hallmark that it was considering dropping the company’s cards when it remodeled the Walgreens store in the neighborhood.

Hallmark responded quickly and involved LGBTQ employees to develop a more relevant presence in the store.

With the help of employee groups, Hallmark has developed card representatives for various communities, including military personnel, Asians, African-Americans, Hispanics and millennials.

Arvest Bank was the presenting sponsor for the April event and is hosting this month’s planning meeting. Brad Krieger, chairman of the Oklahoma City area and executive vice president/regional manager for Oklahoma and Kansas, said the bank works hard to promote inclusion and diversity.

“Many groups in the population are growing faster than others are, and these groups represent our customers of today and tomorrow,” he said. “We’re constantly searching for ways to reflect the community we serve and to help all groups achieve the American dream.”

In the planning meeting, participants will consider the model of Mosaic, Tulsa Regional Chamber of Commerce’s diversity business council. It has grown to include 210 member companies and was featured in Chamber Executive magazine’s fall 2016 issue.

The June 29 meeting also will follow up on the April summit’s panel discussion on millennials in the workplace, which Taqi led.

“Many millennials are strongly driven by their core values, looking for employers with organizational cultures that strongly align with their values rather than just seeking a higher paycheck,” she said. “Millennials feel empowered to speak up and discuss inclusion and diversion in the workplace because they believe inclusive environments are important to the success of our workplaces and our communities.”

For more information on the June 29 meeting, email tahira@schnake.com.