Cafe 501 restructures its menu with your dinner plans in mind

As the waiter walks the Cast Iron Chicken across the floor and between the tables, eyes disengage from conversation to see it pass. In the elegant setting of Cafe 501’s lush Classen Curve location, the matte-black bucket stands out.

The presentation is arresting, but the real show starts when the lid comes off.

Red wine and a slow-braised tomato sauce are married with tender, succulent chicken and spinach. Underneath is a creamy polenta that brings the dish a satisfying heft. The look on General Manager Margaret Holloway’s face says it all: “What do you think?”

An answer is hard to come by. After all, it’s impolite to speak when one’s mouth is full. And this is a dish that begs to be eaten.

For Holloway and Bar Manager Ryan Young, dinner is a proving ground at a spot best known for its daytime offerings.

“We are grateful that so many of our fans faithfully join us for brunch and lunch,” Holloway said. “Now we want to become part of the conversation for dinner, too.”

One way they’re doing that is with a seasonal cocktail menu that reimagines classic cocktails for modern tastes.

Though the Old Fashioned has certainly roared back to life, it’s still a pretty heady concoction, Young said. But the mixology movement allows bartenders and chefs to work together to find new flavors and make those well-worn favorites palatable to a new audience. In 501’s Fall Old Fashioned, a vanilla-cinnamon syrup created in-house softens the edges of the Maker’s Mark bourbon and Peychaud’s Bitters. A dash of Luxardo cherry liqueur gives the drink a touch of sweetness.

“This opens up an entirely new market for us,” Young said. “We’ve found that women who aren’t big fans of the traditional strong taste of some of these cocktails are finding new favorites. It’s about finding a balance that appeals to everyone.”

Young has come up with another version of the Old Fashioned infused with honey and clove.

“If you think about it, this sort of seasonality has been common in our cuisine for years,” he said. “Now we’re just doing it with beverages as well.”

The result is a drink selection that feels timely, original and comforting. The Moscow Mule, a local favorite at many restaurants, is highlighted with 501’s own cranberry-ginger beer, which they carbonate themselves. Served in a classic copper cup, this Mule doesn’t overpower with ginger — a problem for some — instead providing a crisp, easy-to-drink cocktail that balances well with a selection of seafood and vegetable dishes. 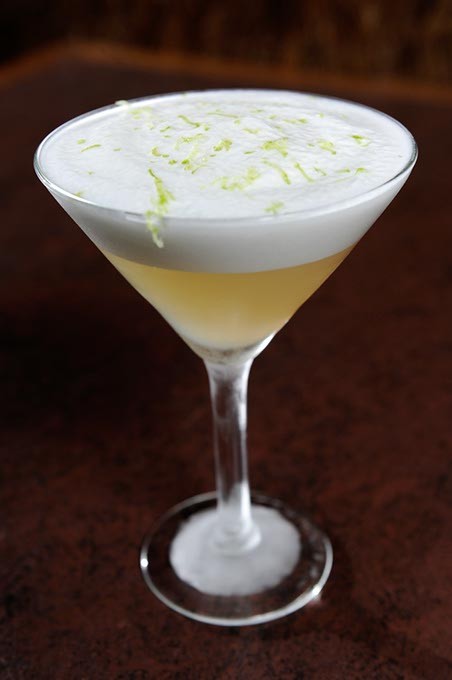 With a flavorful bite, the Manza-rita is especially enticing thanks to a head of roasted apple foam floating on top. It’s welcome twists like this that truly set the cocktail menu apart.

But man can’t (or shouldn’t) live by the bar alone, which is why Head Chef Jose “Pancho” Gallegoz’s menu steps in. The creative and collaborative opportunities at Cafe 501 mean he still has the chance to surprise himself and others.

“The goal is to make it great,” the 15-year veteran said.

The process is a monthslong undertaking with chefs from the Edmond and Classen Curve locations, managers and relatives contributing ideas, ingredients and recipes to the final product.

The staff is already preparing for the Spring-Summer menu change, said Holloway. Much like the current iteration, some dishes will get a trial run as daily specials to judge their appeal to guests.

Aside from the hearty and wholly delicious Cast Iron Chicken, the restaurant has also promoted the seared tenderloin slices to the regular menu. Served almost as an open-faced sandwich, 501 uses its rustic bread as the base for a pile of ingredients that both tickle the taste buds and sate the deep winter hunger.

Beef tenderloin is seared to order with tender caramelized onions, a mild horseradish cream and a thick slice of tomato with broiled blue cheese on top. In the hands of an amateur, this dish could be offensively bold, but 501’s chefs have prepared a dish that is exciting and easy to devour.

“I don’t know why we give steak knives with this one,” Holloway said. “You can cut through this with a butter knife.”

Those searching for a lighter bite might find the shrimp and crab enchiladas an enticing option. Served atop a bed of fluffy cilantro rice, these tender tortillas are filled with a perfectly cooked blend of seafood and topped with avocado and crema for a luxurious taste and feel.

Though seasonality plays a role in the menu, some dishes are untouchable, Holloway said. Removing the tortilla- crusted Santa Fe Chicken might cause a riot among regulars. The marinated and pounded thin chicken breast is beautifully prepared, giving this Southwest-inspired dish a leg up on what can sometimes seem like a common combo of rice, black beans and salsa.

The New Orleans bread pudding will pleasantly surprise those who can somehow hollow out a leg to save room for dessert. Using a recipe passed down by Holloway’s mother, this avoids the pitfalls of so many similar dishes with a mildly chewy texture that keeps it from turning to mush. With ice cream on top and a drizzle of bourbon-based sauce, it is a rare bread pudding worth waiting for.

As a fusion of both the bar and the kitchen, the classic Brandy Ice is a sweetly intoxicating dessert that warms and cools at the same time.

With wide-open windows and a kind of modern-rustic decor, it is little wonder that Cafe 501 pulls in a bustling crowd for its brunch and lunch menus.

But when the sun sets and the menu changes from soups and sandwiches to a sumptuous assortment of entrees and cocktails, there is a different and altogether alluring feel to the restaurant, one the staff is eager to make part of OKC’s dinner plans.

Print headline: Exciting eats, From seasonal takes on the classic Old Fashioned to seared tenderloin, Cafe 501 restructures its menu with your dinner plans in mind.