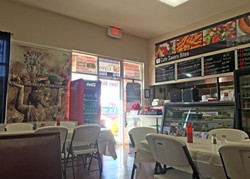 It’s not hard to find a good gyro in the Oklahoma City area. Cattle country has embraced the Mediterranean concept of beef and lamb mixture thinly sliced in a warm pita bread and tzatziki sauce.

Gyros have become so ubiquitous in American culture that it has become a marketing catch-all to incorporate other cultural versions of a similar product, like shawarma from the Middle East or Turkey’s döner kebabs.

Such is the case for Cafe Savory Bites, 101 NE 23rd St., the highest-rated restaurant in Moore, according to Yelp. A large sign advertising $5.99 gyros entices customers along N. Broadway Avenue, but as I pulled into the parking lot and noticed a sign hanging above the door that described it as serving “Meditraian,” I knew I was in the right spot.

Savory Bites’ gyro is very good. I’d place it alongside Baba G’s and Let’s Do Greek as one of the best I’ve had in the city. The warm pita is topped with over a pound of meat and slathered in tzatziki with hints of fresh lemon and cucumber.

I’m interested in the rest of Savory Bites’ menu, which showcases Persian food from Iranian native and owner Mehtr Zaand, who dutifully runs the kitchen alongside his wife.

In the spirit of full disclosure, I had some difficulty fully communicating with Zaand, something I found noted in a few other Yelp comments, but his passion for providing family recipes transcends any barrier.

I told him that I’m interested in trying Persian food because its something I’ve seen in the area and haven’t eaten since I was a child, growing up next to Iranian neighbors. Zaand directed me to the kotlet ($6.99) and kuku sabzi ($5.99).

The kotlet, also referred to as a Persian cutlet, is a mixture of beef, potato, onion and turmeric held together with egg as a binder and then fried on a flattop grill. At Savory Bites, the kotlet is served on freshly baked baguette with tomatoes, red onion and sliced dill pickles with sides of mayonnaise and mustard.

At first, I was somewhat perplexed by the presentation on a baguette and the addition of mayonnaise, thinking it was an attempt to acquiesce to U.S. customs (adding mayo to everything). Upon further research, the kotlet is traditionally served on a baguette, and many recipes I found online in both English and Persian called for the addition of mayo. 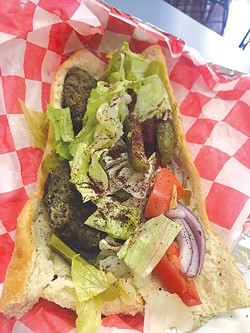 I added a little mayo to the sandwich mixed with a few dabs of off-brand Sriracha sitting at the table and found it a good complement to the sandwich. I still had the fond memory with me days later. The flavor of the kotlet isn’t overpowering; instead, it’s a platform for the other ingredients to do their work. The vinegar from the fresh pickles accented the kotlet, which was equal parts meat and potato.

Do you like to order frittatas but often find them bland beyond the eggs? Kuku sabzi will make you forget every sad, overpriced frittata you’ve ordered while hung over at brunch. The egg mixture gets a heavy dose of fresh parsley, cilantro and dill — so much so that the dish is nearly all green.

The addition of other spices like cardamom and cumin and nuts for a contrast make for an enjoyable dish that can either be a side or entrée. That’s the thing with Savory Bites: The portions are huge for the price point. I ate the kuku sabzi and finished the sandwich later.

Zaand and his wife work as swiftly as possible in the kitchen, and he delivers food in silence, perhaps not to exacerbate the language barrier, but it’s very endearing. I couldn’t imagine opening a restaurant in a new country, and I commend the Zaands for providing a taste of their home country. In other Persian dishes, Savory Bites also offers zaban (beef tongue) and olivieh (a salad mixture typically filled with chicken, potato, carrots and peas).

Each meal comes with a complimentary cup of warm black tea, which is freshly brewed loose-leaf and sweetened with sugar and lemon. I gave up consistently drinking sweet tea many moons ago because I often find it more cloying than refreshing, but Savory Bites’ tea is making me reconsider.

Savory Bites also doubles as a market stand with Sadaf brand spices and soups in the corner. I saw a few takeout orders for gyros come during my most recent visit, but otherwise, I was the sole diner at lunchtime.

It’s clear that their bountiful gyros are good business for them, but I’d recommend going out on a limb and venturing further down the menu to get a taste of delicacies you can’t find elsewhere in the metro.

What works: Kuku sabzi will make you forget any frittata you’ve had.

What needs work: The language barrier can lead to miscommunication.

Tip: Enjoy the complimentary tea while food is prepared.