Caffé Pranzo has served as a neighborhood Italian restaurant for those near Nichols Hills and north Oklahoma City since 1996.

Nestled inside a shopping center at 9622 N. May Ave., a few blocks north of Britton Road, Caffé Pranzo has continued its mission of delivering well-executed American-Italian dishes in a quaint and relaxed, but attentive service setting. It has been over five years since Oklahoma Gazette visited for a review.

Tony Lachance celebrates his five-year anniversary later this October, and he’ll do so by putting his own stamp on the restaurant. Before he took over Caffé Pranzo, Lachance was a manager at Charleston’s Restaurant and was familiar with Pranzo because his wife waited tables there while she taught at Putnam City High School.

“The old owner was ready to retire, and I knew about it through my wife,” Lachance said. “It felt like a good fit.” 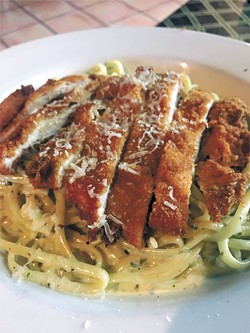 Lachance’s influence on the restaurant can be seen right away after walking through the front door, as a large display of hydroponically grown basil is illuminated across from a bar built by Lachance himself. Lachance said he and a business partner are looking to expand the hydroponic setup to include romaine lettuce and other vegetables.

“I wanted to push toward freshness and really showcase it, not just say it,” he said. “It’s a big deal for me.”

Like most Italian restaurants, Caffé Pranzo allows customers to mix and match a variety of noodles with sauce and protein. There are the standards like linguine, fettuccini, penne and even fresh ravioli and tortellini, but when Lachance took over, he added “zoodles” made from zucchini squash made with a spiralizer.

I have to agree with Lachance. There is no finer savory indulgence in my mind than a large plate of starchy flour pasta with all its simple sugar that turns to fat, and every gluten-free pasta I’ve had can’t quite replicate that comfort feeling or al dente bite from traditional pasta. I’ve used my spiralizer at home to make “zoodles,” and while they don’t mimic pasta, they’re full of more net-positive nutrients than most gluten-free options.

Caffé Pranzo offers different lunch and dinner menus and closes 2 -5 p.m. to accommodate the change. Everything on the lunch menu starts at $8; pasta comes with either a tossed or Caesar salad or a cup of soup, as do sandwiches, but you can also get a fruit cup or French fries.

I made use of both menus during separate recent visits to Caffé Pranzo. During a lunch visit, I ordered linguine in a pesto cream and added fried chicken ($3.99 extra) because, to quote Russell Westbrook, “Why not?”

If you remember my review of Kitchen No. 324’s fried chicken pot pie, you should know that I’ve been looking for more vehicles to combine fried chicken and sauces beyond a gravy-smothered fried chicken.

The chicken at Pranzo is served atop the pasta, which was finished in the pesto cream sauce. The chicken by itself is solidly fried, a cutlet pounded thin and dropped in breadcrumbs. I mixed the chicken into the sauce, which was heavier on the cream than the pesto, to fulfill my desire.

Even at lunch service, I was impressed that Caffé Pranzo had additional servers to handle fresh cracked pepper and grated Parmesan cheese for the salad and pasta. The meal begins with fresh bread and a dipping sauce with marinated tomatoes, onions, garlic, balsamic vinegar and olive oil that was borderline addictive. I ate the entire loaf without thinking about it.

The salad is a nice mixture of green and red leaf lettuce with a few other heartier greens. Nothing makes me more upset than to order a side salad and get a plate of iceberg lettuce.

“[Using nutrient-rich greens] is one of my big things,” Lachance said. “When you see iceberg, you think cheap. It’s all water anyway.” 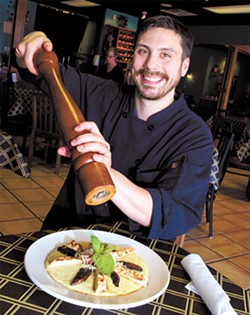 As the kitchen makes the switch to dinner service, the menu more than doubles in size. Standby favorites like lasagna, chicken parmigiana and chicken marsala have been successful since Caffé Pranzo opened. Lachance added spinach artichoke au gratin ($7.99) to the appetizer menu and seafood risotto ($21.99) with shrimp, mussels and scallops to the menu and is ready to bring a mahi mahi dish from popular special to permanent item.

Lachance said one of the most popular dinner items is the seafood pomodoro ($17.99). He said Pranzo is one of the few restaurants in the city to serve the dish. Seafood pomodoro is a bevy of shrimp, scallops and mussels served over fettuccini with pomodoro, which is a basic tomato sauce with garlic and basil that differs from marinara, which traditionally includes other vegetables like carrot and onion.

When I visited for dinner, I was attracted to the chicken cannelloni ($17.49) because that’s another dish I rarely see on menus. Shredded chicken is combined with provolone and mozzarella cheeses and rolled into pasta sheets. It is baked in a tomato-cream sauce and served with a wilted spinach salad that also includes mushrooms.

The sauce was distinct, with a nice balance of tomato, cream and a little spicy kick at the end, and the pasta still had some bite even after baking under sauce and cheese. It was nice to get extra green with the spinach, and I paired it with another tossed salad to meet my antioxidants for the day.

I was impressed with the sauce, which Lachance describes as a cross between marinara and Alfredo. Caffé Pranzo sells all of its sauces in quarts or pints listed on a chalkboard that says, “Buy the bulk by the bulk.”

I also tried the sausage and pepper pizza ($10.49) because it was not available on the lunch menu. I was surprised to find that it didn’t have sauce, but then I remembered that it wasn’t listed on the menu. The cheese, Italian sausage and roasted peppers were of high quality, and I couldn’t help but think the tanginess of the sauce might take away from the sweetness of the peppers.

If, like us, it has been awhile since you last visited Caffé Pranzo, you will be pleasantly surprised by the changes made by Lachance.

What works: The lunch is a great value, and the sauce on the chicken canelloni is delicious.

What needs work: The sausage and peppers pizza might benefit from sauce on the side.

Tip: Everything on the lunch menu starts at $8.