CAIR-OK focuses on building bridges at the state Capitol 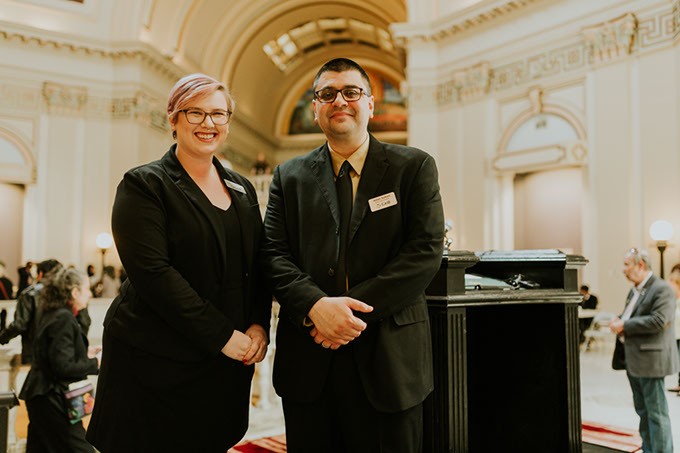 Confronting fears of Islam and countering Islamophobia — both by-products of ignorance and negative stereotyping — Oklahoma’s Muslim community entered the “people’s house” for the third annual Muslim Day at the Capitol on March 2, sponsored by the Council on American-Islamic Relations (CAIR) Oklahoma chapter.

Just three years earlier, the leader of CAIR-OK heard comments of fear and uneasiness from Oklahoma Muslims over visiting the Capitol to experience the empowerment of citizen advocacy.

Because of their faith, they feared they wouldn’t be welcomed.

Human chains of volunteers, who protected participants from protestors, coupled with a growing lineup of panels with state legislators paved the way for a growing advocacy event for Muslims, who are players in the state’s social and political fabric.

In year three, after morning workshops empowering participants to make their voice heard in face-to-face meetings with lawmakers, Muslims began their visits.

When three students ventured into the office of Sallisaw Republican Rep. John Bennett, known for making anti-Muslim remarks in his official capacity, and were handed an Islamophobic questionnaire, it made national headlines.

Sadly, the incident is the latest on a long list of anti-Muslim events in Oklahoma, a state in which its leadership often promotes religious values.

Months earlier, Bennett conducted an interim study on “radical Islam” in which a presenter called CAIR a terrorist organization.

Oklahoma Muslims face many challenges, but so does Oklahoma, where repeated bigoted and racist comments and actions plague a faith community. New efforts underway by CAIR-OK seek to build bridges and help others gain a better understanding of Islam at the state level.

“My focus is to be a present advocate for the Muslim community at the state Capitol on a regular basis, such as committee hearings and floor proceedings,” Anna Facci explained. “I also do the groundwork to build deeper and stronger relationships with state representatives and state senators.”

In January, Facci transitioned from CAIR operations and event director to government affairs director, a new position for the Oklahoma chapter. While her work included legislative work, CAIR-OK leaders wanted an established CAIR representative as a Capitol fixture after Bennett’s interim study and a rise in anti-Muslim rhetoric in the recent presidential campaign.

“Oklahoman Muslims are just like every other Oklahoman who wants to see their values represented in their government,” Facci said. “For Muslims, many of our issues revolve around social justice and public education. The state’s budget crisis is a moral issue to us. As Muslims, it is important for us to look out for the social safety net because it is looking out for the least among us.”

Muslim Day at the Capitol provided Facci and other CAIR-OK officials an opportunity to educate the community on how government operates, teach political advocacy and discuss issues surrounding their legislative agenda. In the afternoon, members were encouraged to meet with their elected officials.

Facci and Soltani led the charge encouraging the 200 attendees to stop by their legislators’ office.

“No matter what your identity is, your legislator makes decisions for you and behalf of you on a daily basis,” Facci said as she recalled a message she repeated with CAIR members. “You have an opportunity to be part of those decisions.”

As members began to trickle out of representative and senators’ offices, Soltani heard of friendly conversations, some lasting as long as 30 to 60 minutes, with lawmakers.

While CAIR-OK has built relationships with some lawmakers, some members reported quality interactions with lawmakers not familiar to the organization, Soltani said.

“It signaled that we are making inroads toward having our voices heard,” Soltani said. “Muslim Day at the Capitol can be the catalyst to encourage and motivate people to advocate year-round. In adding the position of government affairs, that’s where we will see the value. It’s no longer just one day. … Sustained advocacy from community members is where we feel we can most effect change.”

It was a defining movement for CAIR and its supporters, who have faced opposition because of their faith when engaging in citizen advocacy, but also outside the Capitol, where actions include passing insults telling Muslims to “go home.”

Muslim Day at the Capitol returns in 2018, and with Facci as government affairs director leading members in citizen advocacy, both Facci and Soltani see Muslims stepping up to play a larger role in politics. It will require individuals from the Muslim community as well as Facci continuing their advocacy efforts and countering Muslim stereotypes.

“The goal is to prove,” Facci said, “we are not that which they say we are.”

Print headline: Speaking up, A new push by CAIR-OK leaders seeks to further build bridges in the state Legislature