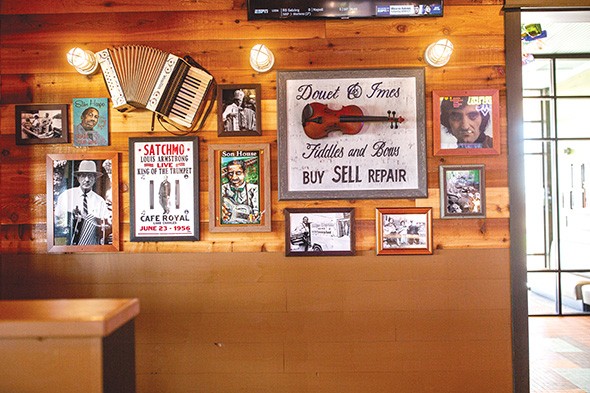 On an indoor deck at the new Razzoo’s Cajun Cafe location in Oklahoma City in the Chisholm Creek development, 1340 W. Memorial Road, diners sit surrounded by photos and knickknacks of Mardi Gras culture as windows open to overlook the development’s lake for an atmosphere the privately owned chain is aiming to provide.

Founded in 1991 in Dallas, Razzoo’s has expanded from a humble shack — founder Jeff Powell and partners cobbled together just enough décor to make the concept work on a minimal budget — into a Texas powerhouse with 20 locations across the Lone Star state. The company has expanded into North Carolina and opened in Oklahoma City in October.

“It goes back with Oklahoma City because we’re not too far south and Dallas-Fort Worth is a destination for people in that market, so we made a lot of friends,” Powell said by phone. “I can recall a couple of people — it was good-natured — but they were on me, ‘When are you coming [to Oklahoma City]?’”

Powell was quoted in a 2006 Dallas Business Journal story about eyeing expansion into Oklahoma City. He said it became a priority after stabilizing its reach around Texas, and the opportunity at Chisholm Creek was too good to pass up. 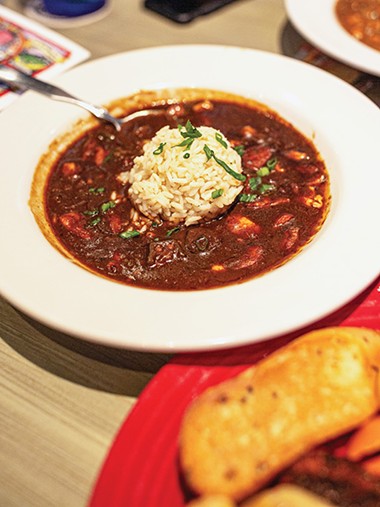 “If we can find that circular placement with solid neighbors, and any type of outdoor seating with a water feature really fits well with the concept,” Powell said. “The timing was right, but so is the [Chisholm Creek] development; the placement and feel of the building is really outstanding.”

The 8,000 square-foot building seats as many as 225 customers who are greeted with a colorful glass bottle chandelier in neon green, gold and purple colors of Mardi Gras that lead into the concept’s signature horseshoe-shaped bar that serves Bourbon Street-themed alcoholic and nonalcoholic cocktails.

The design is representative of where the brand is headed and has been replicated at its three most recent stores while the others will be updated to reflect a theme that screams Mardi Gras but isn’t over-the-top.

“In 1991, when we first started the original location was a shack, and as we grew, there were more stuff and artifacts on the wall that you’ll see in New Orleans,” said Oklahoma City manager Matt Hubbard. “We had a tornado display and looks like something you’d see in a tornado: boats, oars, ice coolers, accordions, lawn chairs all wrapped in Christmas lights. We scaled down, but it still looks like a Razzoo’s inside and out.”

Powell said there was a time early in the company’s expansion when they veered too far into fine-dining territory with things like marble countertops before realizing “the real warmth and comfort in that authenticity is what was very important to [their] guests.”

Razzoo’s growth into Oklahoma City hasn’t been a linear upshot. A previous attempt to expand into the Atlanta market failed after a few years, and a San Antonio store was closed last decade, but the company successfully spun off its Tricky Fish menu into a standalone concept with two locations that recently split off from the main company so they could grow at a deliberate rate while Razzoo’s eyes national expansion and reinvestment into its existing locations.

One of the biggest question marks for a restaurant during expansion is consistency, especially when cooking Cajun and Creole dishes, a lot of which begin with the time-consuming process of making roux — a combination of flour to butter or oil that must be constantly stirred so it turns dark brown rather than burns. Instead of handling 22 kitchens and the individual variables they introduce to the roux process, Razzoo’s makes all of its roux off-site.

“It’s a give and take [during expansion],” Powell said. “The measure of success is when a guest says, ‘I love it; it’s great.’ If you’re making a roux in 22 different locations every day, it requires a lot of attention because you’re dealing with hot fat and flour, but you’d have subtle differences location to location.” 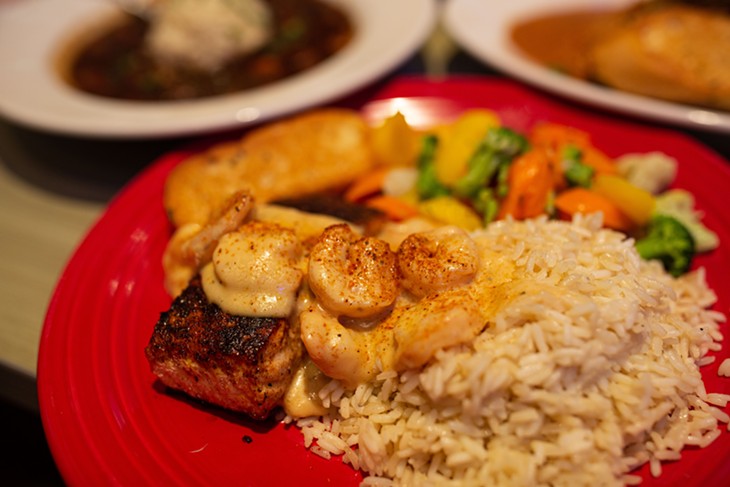 Other than a few base sauces, everything else in the Razzoo’s kitchen is prepared fresh daily. This includes longtime favorites like Rat Toes, which are shrimp and crab-stuffed jalapeños, and Cajun fondue with shrimp, crawfish or chicken — the top-seller is the shrimp and catfish combination.

Grilled alligator is served over jambalaya filled with Andouille sausage, chicken and crawfish. Étouffée and gumbo is served with seafood and chicken and sausage varieties, and the restaurant is a go-to for fresh oysters.

In recent years, Razzoo’s has expanded its menu to include a hickory burger in addition to its already popular Big Easy burger, a buttermilk fried chicken sandwich and salads to eliminate the “no vote” among anyone who might not be in favor of ordering hard-to-pronounce or spicy dishes like chicken Tchoupitoulas or shrimp en brochette.

Powell said that watching Razzoo’s grow over the years is a tremendous source of pride, but he’s most proud of the work his staff has done to help make that happen.

“To still be around to have the reputation that allows you to open the doors in Oklahoma City and be absolutely blown away, there is a lot of return there,” he said. “I don’t take it for granted.”

It’s people like Hubbard, who started working for Razzoo’s in 1997 as a bartender and has worked his way through the company over the years.

“One of the things that intrigues me is that we have a ‘Whatever it takes’ attitude, whether it’s finding a champagne bottle for an anniversary or going to the store to buy chips because a kid really wanted nachos,” Hubbard said.

Razzoo’s in Oklahoma City celebrates its grand opening with a ribbon-cutting Thursday that includes giveaways and free samples.