Cajun King's mission is to stuff you full of food 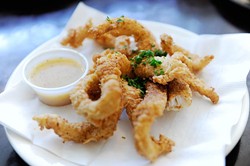 The way most all-you-can-eat buffets work is they charge you just enough that you have to eat a second or third plate of food so you don’t feel like you’re getting ripped off. The food doesn’t have to look good or taste good; it just has to be there.

And then there’s Cajun King, 5816 NW 63rd St., where you will sit, stuffed to the gills, looking longingly at the buffet line and the plate in front of you. It hurts. You should have worn sweatpants or just a black plastic trash bag, because the clothes you came in with no longer fit.

But maybe you’ll have just one more plate. Just. One. More.

You pay on the way in at Cajun King. You can get a soda or a beer, but that’s extra, of course.

When you sit down, your server will drop off your drinks and a couple of baskets. One has beignets, which are tender little fried pillows covered in powdered sugar. Be aware that there are a few dangers associated with these. The first is accidental powdered sugar inhalation. The second is sneezing a giant cloud of powdered sugar all over your dining companion.

The third is the risk we all run, which is becoming addicted to these things and eating yourself to an early, but happy, grave.

The other basket is my favorite basket. Seriously, no other basket comes close to this one. Wicker, Easter egg, of fries — none can challenge the supremacy of the catfish almandine basket. These are golden-fried catfish tenders. The batter is lightly sweet and crunchy, but the fish inside is succulent and ready to melt on your tongue. It’s the almond flour that makes all the difference.

Cajun King has blackened catfish and blackened pork chops as well, though I much prefer the pork chops. The pork is a bit more durable (and flavorful) than the catfish, which means it lasts a little longer on the buffet without becoming too tough.

One thing you must eat is the Southern fried chicken. I mean, you really must. The employees of the restaurant will look at your plate and say, “Aren’t you going to get some fried chicken?” and you will look at them and realize it’s not so much a question as an order.

Listen to those people. Because this is some of the best fried chicken in the metro — especially when it’s hot out of the fryer and you can have your choice of pieces.

They’re not enormous, but it’s a buffet. Just go back and get more if you want it.

And you will, because the fried chicken wing I had was juicy and tender and the skin was coated in a sweet and spicy batter that puts the Colonel’s 11 secret herbs and spices to shame.

Maybe my favorite all-time Cajun treat is crawfish étouffée. The dark, buttery roux means that, honestly, you could make cardboard étouffée and I’d probably still love it. But those sweet little crawfish tails are delectable. The rice is just plain white rice, but when you’ve got the flavor-packed stew of crawfish étouffée going on top, it doesn’t much matter what’s underneath.

Here’s another warning for you: The gumbo is good, but you need to watch out for crab shells. Cajun King uses crab in its gumbo, along with sausage and shrimp, but the crab is still in the shell. There’s lots of flavor in there, but if you bite too hard without checking, you might end up with a little something crunchy in your teeth.

It’s a fool’s game to eat bread at a buffet, but you can’t skip the buttery rolls Cajun King serves. Are they tiny heart attacks waiting to happen? Almost certainly. But they taste so good. Make a little sandwich with your pork chop and some collard greens. No one can stop you.

The macaroni and cheese was fine, especially if you’ve got a picky eater with you, but I’ll skip it next time I go and focus on more meaningful dishes like fried frog legs, boudin balls and jambalaya.

The candied yams aren’t technically a dessert, but their fall-apart sweetness will make it feel like you’re cheating on the bread pudding at the end of the counter.

Most buffets are just trying to get as much out of you in one trip as they can, and vice versa. At Cajun King, though, the way it’ll “get you” is by giving you so many tasty options you can’t eat them all. Guess we’ll just have to keep going back, right?

Print headline: Royal repast, Cajun King is a buffet like no other, with a focus on great food that keeps diners coming back.

What works: Catfish almandine and Southern fried chicken are tops.

What needs work: Crab shells in the gumbo might surprise some folks.

Tip: Leave a tip. Just because you paid up front doesn’t mean servers aren’t taking care of you.