Whiskey Myers goes in different directions on their new record, but they’ve mapped out every step for themselves. 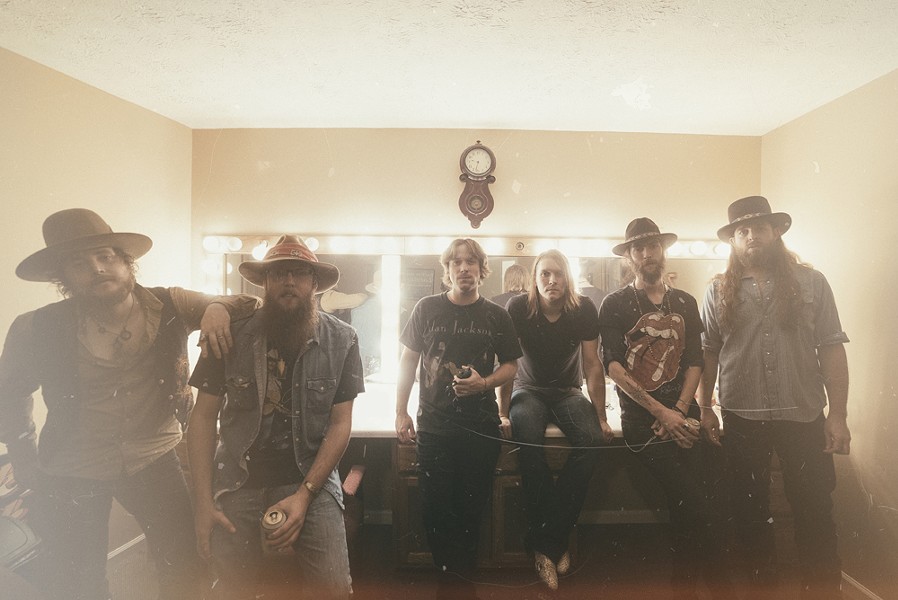 From the first notes of the song “Tornillo,” which opens the new album of the same name that Whiskey Myers will release on July 29, it’s apparent that some new musical twists are in store from the veteran band.

Horn parts straight out of a spaghetti western open the song, before it segues into “John Wayne” and the kind of crunchy mix of rock and country that has come to define the Whiskey Myers sound. And on several of the other songs — most notably on the aforementioned “John Wayne,” “Antioch,” “Feet’s” and “Mission To Mars” — robust horn lines and female backing vocals bring new dimensions to the band’s sound without altering the core sound of the band.

But don’t assume that the additional instrumentation and vocals were some big calculated move. All Whiskey Myers main songwriter Cody Cannon and the rest of the band were thinking going into the “Tornillo” project was that they wanted to do something different this time around.

“We never really do that much thinking about it. Usually we just go in and make a record,” Cannon said. “This time, it was a little bit different. We’d been wanting to do horns for awhile. I guess during the writing process, I was hearing, like, horns and stuff behind certain sounds. It was in the back of my mind. So I guess that was different this time. We try not to put that much thought into it, trying to find the perfect sound. But I knew on this record I didn’t want to do the same thing. I wanted to do something different.”

That rather spontaneous approach to making music has served Whiskey Myers well throughout a career that now stretches back 15 years and six albums.

As subsequent albums were released — “Firewater” in 2011, “Early Morning Shakes” in 2014 and “Mud” in 2016 — the band expanded their tours beyond Texas, playing shows across the United States as their grass roots following grew and the band racked up positive reviews for their brawny mix of rock and country.

Then in 2018, Whiskey Myers’ career took a significant upturn when several of the band’s songs were used in the first season of the hit television series “Yellowstone” and the band did a cameo in the fourth episode of season one.

The show’s co-creater and writer Taylor Sheridan approached Whiskey Myers about participating in Yellowstone well before the public knew anything about the show – and before the band knew much about Sheridan.

“Taylor Sheridan called me on the phone,” Cannon said. “I guess he got my number from management and called me and we just talked about, he said he wanted to have us on and have a little cameo, too and told me about the show and stuff like that. I talked to the guys and we said let’s do it.

“The show wasn’t even out yet or anything. We were on one of the first episodes,” Cannon said. “I don’t even think there were trailers and shit out. He was telling us about the cast and kind of the premise of the whole thing.”

At the time, Cannon said, he and his bandmates didn’t think a whole lot about their involvement in Yellowstone but he now realizes what a major moment it was.

“Just us being an independent band and never really trying to write radio songs or take them to radio in any certain way, we had never had a platform to reach millions of people like that at once, just like hey, in your face, here we are,” Cannon said. “That was the first time we ever had that happen, a platform like that to reach those people.”

Now comes “Tornillo,” and the band is poised to reach an even larger audience. Like the self-titled album, “Tornillo” was self-produced by the band. After working with Dave Cobb, one of the most in-demand producers on the Americana/country scene, on “Mud” and “Early Morning Shakes,” Cannon and his bandmates felt they were ready to produce themselves.

“We learned a lot from him,” Cannon said of Cobb. “We probably couldn’t have done the last two records without doing those two before that with him.”

That Whiskey Myers wanted to take control of producing their albums fits perfectly with the group’s overall approach to their career.

Nearly everything that’s been achieved so far has been done on the band’s own terms as a completely independent act. That includes releasing the albums on Whiskey Myers’ own label, Wiggy Thump, and hiring out other functions such as distribution and promotion.

Cannon said going the do-it-yourself route seemed like the only viable option for Whiskey Myers, and having turned down overtures from labels in the past, he doesn’t foresee a scenario where the band would benefit from signing a label deal.

“Honestly I don’t want a fucking boss. It’s like why wouldn’t you do it yourself and own it?” he said. “I think us, as a whole, we always wanted to have this freedom of the creation of stuff, and that can get lost (with a label). And as far as me personally, I don’t know, I just like the music and writing the songs. I never gave a shit about being famous or anything like that. So doing that kind of stuff, it never really appealed to me as much as just playing the shows and trying to do a good job and make some music. Now we’re so far into it, like, hell, why would I want to do that now? I don’t want a boss. That’s what you’re essentially doing, you’re working for somebody. It’s kind of a partnership, but not really. They’re telling you what to do and giving you deadlines to make stuff. I’m not interested in that stuff at all.”

With “Tornillo” ready for release, Whiskey Myers is doing what the band usually spends a big chunk of any given year doing — touring. Cannon said the group will be cautious about adding songs from the new album to the set, especially considering many of the shows will precede the release of the album.

“We’ve kind of learned that process by trial and error,” he said. “You know, back in the day maybe you were excited to show people new material and stuff and you put four to six in the set and people just kind of stand there and look at you with a blank look because they don’t really know what’s going on. But we’ll be playing some new stuff on the tour coming up, I’m sure.”

Whiskey Myers plays the Zoo Amphitheater on May 13. Tickets are $35-65. Visit thezooamphitheatre.com