The band’s fourth studio album comes out Tuesday, and they will share the celebration with Oklahoma City at The Conservatory that same day. 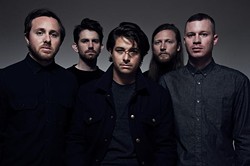 Delta Spirit is back with a new album, hungrier and ready for more of life. The band’s fourth studio album, Into the Wide, comes out Tuesday on Dualtone Records, and they will share the celebration with Oklahoma City at The Conservatory that same day.

When the indie-rock quintet decided to make the jump from the West Coast after the release of its 2012 self-titled album, its members probably didn’t realize it would bring them closer to their roots. They left San Diego for Brooklyn and set up shop.

The studio backed about six feet of what Vasquez described as “EPA water,” housed a family of rats and offered not one shimmer of sunlight, as there were no windows to speak of. Not long after they established themselves in their new base, though, Hurricane Sandy destroyed everything they had set up.

The group picked up, counted its losses, mourned ruined stacks of equipment nostalgia and rebuilt the windowless space. Vasquez took 30-minute walks to the rebuilt studio each day, which gave him a lot of time to think.

“Most of the songs are about nature,” he said, “in this locked-up concrete room.”

The feeling of urgency and need for escape is present on the album’s first single, “From Now On.” There’s a calmness to its verse, drenched in anticipation, but the song bursts through to freedom in the chorus — in a daze of simple, unbridled rhythm and overarching guitar.

“Not being able to escape and wanting the trees and the mountains — real mountains,” Vasquez said of his time in New York.

He missed national parks like Yosemite and being isolated in nature, where one can become overwhelmed with the world.

“God moments,” Vasquez called them. “You can write a whole record with one of those moments.”

Though it might seem like a lot of the inspiration is about nature and escape, that’s not the sole intention of the album.

“I write a song for a song,” Vasquez said, “I lean on imagination.”

Using those long walks to meditate, Vasquez also drew inspiration from the international section of The New York Times and revisited prior convictions of his youth — or, as Vasquez put it, “the tried and true epiphany.”

The band finished up its album with producer Ben Allen (Animal Collective, Deerhunter, Bombay Bicycle Club) in Atlanta. The change of scenery was refreshing and made a difference for the whole band. Finally getting out of the city, they borrowed a cabin and worked in a halved freight car that had been converted into a control room.

“It had windows,” Vasquez said with a laugh.

The mix of loss, imprisonment, escape and eventual freedom throughout the course of making Into the Wide will showcase Delta Spirit’s range as never before. Highlighting the group’s grounded base, there has always been a lighter flow hovering just above the surface, forever reaching for something: those god moments.