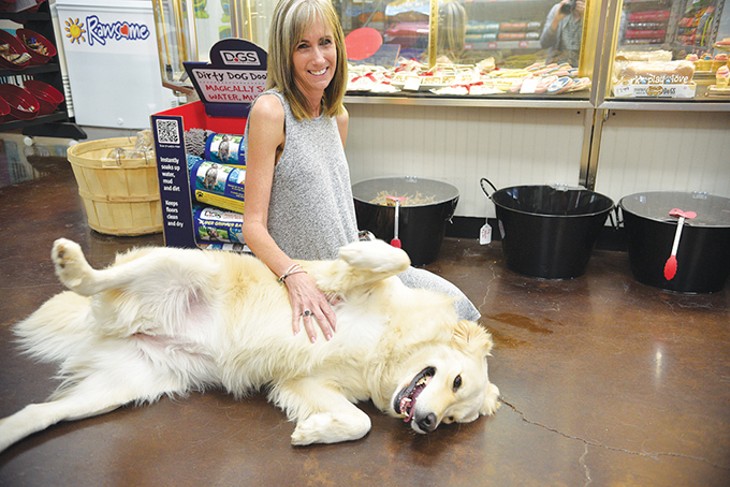 Since taking over as owner of natural pet food store Mann’s Best Friend in 2016, Lisa Jensen takes pride in the fact that she is a salesperson’s nightmare.

The store at 10600 S. Pennsylvania Ave., Suite 15, has been open since 2006. Jensen became a frequent visitor after moving near its southside location and becoming good friends with the original owner. When the owner moved to Texas, Jensen jumped at the chance to continue the store’s commitment to healthy pet food.

Jensen listens to each pet food salesperson that comes to the store to pitch a new product, but she’s never one to pull the trigger without doing her own research.

“Reps can’t stand me. To get in my store, you need a good product and a good company,” she said, noting that her research has included visiting packing facilities. “I want to know you’re credible. … I want to know where the ingredients are coming from and where it’s manufactured. A lot of companies co-pack, and it could be with a lesser quality food and there are cross-contamination issues.”

Jensen said her two biggest passions in life are working with children and animals. As a volunteer with Safe Haven Animal Rescue, she’s often fostering dogs at home, some of which are dealing with physical ailments.

"I started researching the living daylights out of it, and I couldn’t find anything negative." —Lisa Jensen tweet this

Thinking back to her original career as a licensed professional children’s counselor, she remembered the success of cannabidiol (CBD) hemp oil, which has miniscule amounts of the psychoactive element of marijuana, in treating children with seizures.

Not long after Oklahoma legalized the sale of CBD oil in 2017, Jensen heard from a friend whose husband used the CBD oil to treat a back injury, and it jogged her memory of its success with children.

Just like with the pet food product pitches she receives at the store, she did her digging into the effects of CBD oil.

“I started researching the living daylights out of it, and I couldn’t find anything negative,” Jensen said. “Everything is either, ‘Well, it didn’t hurt anything, but I didn’t do a whole lot.’ If it can’t hurt anything, then why not try?”

Jensen said that she was further emboldened to make the plunge into CBD oil after realizing that even if the hemp byproduct doesn’t provide pain or anxiety relief, the hemp’s naturally high levels of Omega 3 and fiber have their own benefits.

Mann’s Best Friend began carrying CBD oil in the first half of 2017, and its section has expanded. At first, Jensen was not expecting to carry CBD dosages for humans, but the demand became large enough that she carries supply for her customers.

Mann’s Best Friend offers a variety of CBD products, including tinctures that absorb under the tongue, balm that is good for specific local applications and things like CBD-infused honey and shakers that pour CBD and other nutrients over dog food.

“My hands started to throb with the beginning of arthritis, so I put balm on, and I’d get relief,” Jensen said. “I added the tinctures, and after a few months, I realized I hadn’t put the balm on in forever because I didn’t need it. The combination of the two is great.” 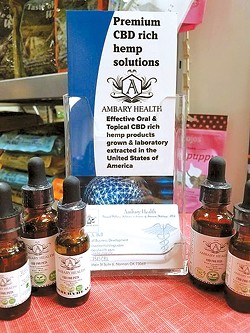 She also carries a CBD gel that is perfect for cats — but can be used for dogs too — because it squeezes out of the tube in 1 milligram doses, which can be easily applied by rubbing into the pet’s ear.

“Have you ever tried to give CBD to a cat? They’re so finicky, and if you put it on their food, they will say, ‘Nope,’ so the gel is really the best way,” Jensen said.

She said that most customers administer CBD oil to pets to combat arthritis and help soothe storm anxiety. She is particularly proud of Oscar, a dachshund that was rescued from a puppy mill in her work with Safe Haven who was completely paralyzed and needed a wheelchair when he came to her care.

Oscar underwent surgery to restore stability and strength to his back legs, but after a few months, his condition worsened. He has started CBD oil, and while he still uses a wheelchair in public, he’s able to stand and walk on his back legs with his new adoptive family.

“Look how happy he is,” Jensen said, showing off a video of Oscar from his new owner.

She has heard success stories of elderly dogs getting a burst of energy in their final months thanks to CBD oil.

“It’s not as if it is lengthening lives, but it makes the quality so much better,” Jensen said.

With CBD oil becoming a hot commodity, Jensen worries about the overall quality with more storefronts quickly opening around the city.

“I’m constantly pitched new CBD products, and I’m wary,” she said. “You need a medium chain triglyceride mixed into the solution to break the blood vein barrier for it to be effective; otherwise, you are wasting your money. Don’t just throw anything in there.”