Telemedicine provides a solution for medical cannabis patients unable to visit a clinic. 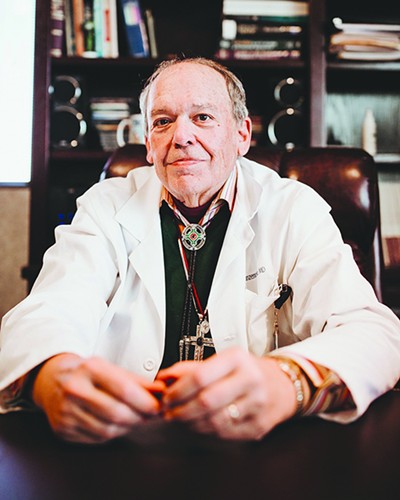 The two biggest impediments to getting a medical cannabis recommendation are money and time, but once you have gotten the funds under control, Chronic Docs will be able to save you a little time.

Carri Lawrence got the service off the ground about two months ago. It operates under her Chronic Rx Solutions business umbrella, which includes staffing, transport, security and other business solutions for the cannabis industry.

Doctor visits typically last about 10-20 minutes, Lawrence said, and can be arranged from anywhere — virtually. She has a team of six doctors, and she hopes to expand into pediatric recommendations soon.

Adult recommendations are priced at $165 for the doctor’s appointment, and her staff will help patients submit their paperwork and photo to Oklahoma Medical Marijuana Authority (OMMA).

“Literally, the patient corresponds with us by text message, email and then video chat,” Lawrence said. “And then we’ll request from them what all we need. We send them electronic paperwork to fill out, so they don’t have to print out the papers, they don’t have to go to a computer unless they want to. They can do it straight from their smartphone. And then once they fill everything out, they sign it and send it right back to us so they don’t have to print out anything. And then we schedule the appointment with the doctor and then they would talk to them via video chat.

“After they see the doctor, then we actually start their online application with the OMMA, and we load everything up there, load up all of their documents, we get them to take pictures,” she said. “They just text or email us the photos. … If their picture’s not right, if it’s something that will be rejected, we let them know, ‘Hey, you’ve got to take your glasses off,’ ‘Hey, don’t smile’ or ‘You’ve got a shadow in that picture.’ So we can help them from getting rejected doing that. And then we do all of it. So then basically we text them once we’re done with everything and we say, ‘Here’s your username and password. Login, review everything for accuracy.’ If everything looks good, they just pay the state fee directly to the OMMA and then they’ll get the email that says that they’ve been accepted. And then they wait the 14 days and then they get their letter in the mail. And then if there’s any rejections or if there is any problems, they just let us know and we’ll fix whatever it is really quickly.”

Lawrence is also the organizer of Chronic Palooza, held at the fairgrounds April 20. That day, her doctors saw and recommended cannabis to more than 1,100 patients. They started the day doing all the paperwork by hand, but the line grew longer and longer. Eventually, they just sent the Chronic Docs widget to those in line and the line started flowing smoothly.
“They can do it straight from their smartphone. And then once they fill everything out, they sign it and send it right back to us so they don’t have to print out anything.” — Carri Lawrence tweet this

“People were standing in line for a long time, and I was just like, I don’t like that,” she said. “I don’t like them having to stand there, looking at us, and be uncomfortable and hot and the kids are there and they are getting a little bit frustrated. And so finally, I was just like, ‘Let’s just do this Chronic Docs-style. We don’t need to sit here and make them stand here and look at us do their data entry because that’s just foolish.’ And then once we started doing that, the line started flipping fast.”

Clearing a physical line is one thing, but telemedicine also helps those who cannot get out to a doctor’s office easily.

“We get people who are in the hospital, hospice, people out in the panhandle that would have to drive an hour and a half, two hours to get anywhere where there is one,” Lawrence said. “We’ve got one area where they’re saying that the doctors only come once a month, and then they are there hours and hours and hours that they wait. And sometimes they can’t be seen because they run out of time, and then they just have to wait. And so they don’t have to wait with us. It’s a little bit more than a lot of the traditional drives because they’re doing it at a really discounted rate, but there’s a lot more staff involved with the hours to get all this done. And just all the technology and we have to pay out stuff for credit card processing. There’s costs and stuff that are involved. That’s why ours is what it is, but it includes the actual processing fees of it.”

Dr. Michael Winzenread is one of the doctors that participates with Chronic Docs.

“Mostly what we’re doing on the telemedicine are the small towns and shut-ins,” he said. “You can tell where the needs are.”

Winzenread said he is currently working with Chronic Docs two afternoons a week.

“It’s been a really fun time and helping a lot of people get off benzodiazepines like Xanax and opiates and heroin,” Winzenread said.

Winzenread also supports full legalization of cannabis, despite the fact that he acknowledges some people will abuse it.

“It’s going to be recreational whether it’s legal or not,” he said.

It is his first foray into telemedicine, but he has quite a bit of experience being around cannabis. He smelled it in cancer wards in the 1970s, his son has lived in Colorado for more than a decade and his daughter lives in California.

“Personally, I’ve done about 250 of the telemedicine ones,” Winzenread said. “But here’s the deal. It’s like doing a free clinic almost and doing my other doctoring work. It’s so rewarding; patients are so appreciative that somebody will listen to them and take care of them.”