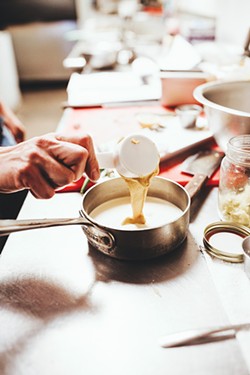 Baking with cannabis can be tricky. If you leave the marijuana goodie in the oven too long or at too high of a temperature, it will lose its potency.

Oklahoma Gazette has partnered with the minds at Guyutes, 730 NW 23rd St., to go beyond the ubiquitous pot brownie and provide cooking with cannabis recipes that will deliver desired medicinal results in an elegant fashion.

Guyutes owner Jarrod Friedel and chef Matt Pryor have teamed up to create medical marijuana-infused recipes without any unwanted aftertaste.

This month’s recipe is halibut en papillote with seasonal vegetables and sautéed new potatoes. En papillote is a French technique but sounds fancier than it is. It is a dish (usually seafood) wrapped in parchment paper and baked.

“I like the color of seared halibut, but it’s such a soft fish that it is hard to actually get that perfect texture and not have it crumble, especially for people that haven’t used it before,” Pryor said. “We decided to go with the papillote style just to make it easier for everybody else. That is something that you can use, and it doesn’t take too much time. It’s about a 15-minute cook.”

The first step in cooking with medical marijuana is the decarboxylation process, which requires heat to separate the THC from the plant and make it ready to metabolize. It’s the reason you can’t eat marijuana raw and feel the effects. You have to heat it up by smoking or in a pan or an oven with a controlled temperature.

Friedel recommends breaking up the medical marijuana — 7-10 grams will be needed to make infused butter — either by hand or with a grinder. He cautions not to grind the flower into a fine powder. Put the marijuana on top of parchment paper on a baking sheet and preheat the oven to 220 degrees Fahrenheit. If the oven rises above 300 degrees Fahrenheit, it will burn the flower and rob it of its medicinal effects.

He said to keep the flower in the oven for two to three hours until it starts to turn brown, which means the THC and cannabinoids are being released.

THC is fat-soluble, which means that oil or butter is the best delivery method for the medicine. Infused butter in the mustard sauce becomes the finishing element for the halibut.

1. To clarify the budder, melt it in a 2-quart saucepan on low to medium heat, being careful not to scorch it. Once melted, adjust the heat to maintain a low boil and cook off milk solids and water.

2. After 45 minutes, the butter should be clear with a lot of foam on top. Place a cheesecloth over a jar and pour the butter into it. Do not squeeze.

3. After the butter has drained, remove the cheesecloth and pour the clarified butter into another saucepan. Add the decarboxylated marijuana.

5. Strain the butter over another cheesecloth back into the jar. Allow the budder to cool or use it immediately. 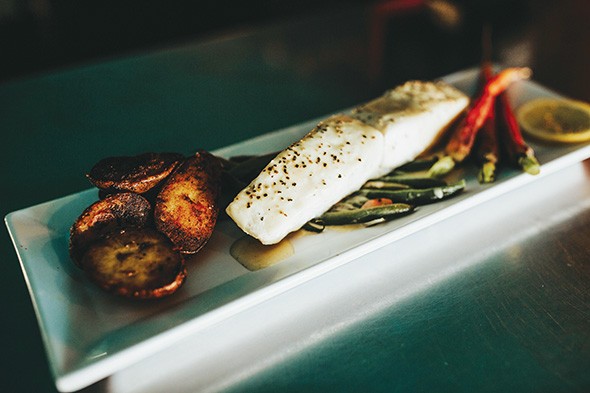 1. Preheat the oven to 400 degrees Fahrenheit. Fold the parchment paper down the middle.

2. Place half of a sliced lemon along the crease. Place 1 halibut steak on the lemon. Place half of the carrots, green beans, shallot and garlic around the fish. Sprinkle it with salt and pepper. Repeat with the other steak.

3. Fold in the edges of the parchment paper to make a seal while still leaving room for air. Place it on a baking sheet and into the oven. Set the timer for 12 minutes.

4. When the timer has seven minutes left, start the sauce and potatoes. For the sauce, add the heavy cream, dijon and sugar in saucepan over medium heat. Bring it to a boil and whisk constantly. Reduce the heat to a simmer and whisk until the sauce thickens. Remove it from the heat and whisk the budder into the sauce.

For the potatoes, heat butter in a sauté pan. Add parboiled potatoes and thyme and pan-sear for three to four minutes over high heat. Finish it with a balsamic vinegar reduction.

5. Remove the fish from the oven. Carefully open the parchment paper and remove the fish and veggies. Plate the fish, veggies and potatoes and top them with mustard sauce.

I like this recipe a lot because not only is clean-up easy, but keeping the infused budder on the side leaves how much they want to add to the dish up to the diner. There is about 87 milligrams (43.75 milligrams per tablespoon of budder) of medicine total in the mustard sauce, which would be a very high amount to consume at once.

I liked the inclusion of purple carrots, which, believe it or not, are one of the original colors of carrots, until they were genetically bred to become orange over generations. All varieties of carrots are packed with nutrients, but the purple variety is especially high in antioxidants.

I drizzled two teaspoons of mustard sauce over the fish and dipped some potatoes into the budder and felt a very nice body high for about 3 hours and kicked in 45 minutes after the meal. It didn’t result in any head fogginess and reduced any anxiety, which is the reason I have a medical marijuana license. The remaining mustard sauce will keep in the refrigerator and can be used as necessary.