The inaugural Cowboy Cup will be held Dec. 13 and 14 in Stillwater. 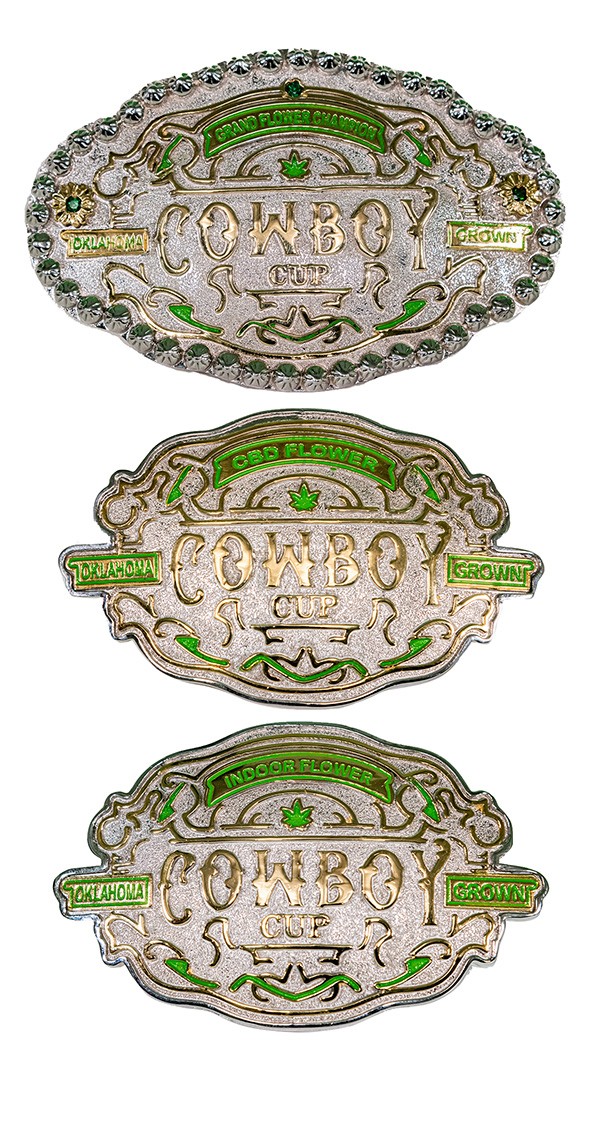 The inaugural Cowboy Cup is held at Tumbleweed Dance Hall, Lakeview and N. Country Club Road, in Stillwater, and organizers pledge it will be “Oklahoma’s premier cannabis championship, expo and harvest festival.”

Food trucks and alcoholic beverages will also be available.

F.A.S.T. Laboratories coordinates the product testing for the event, which includes a wide range of categories including cannabis flower, concentrates, edibles, topicals and CBD flower.

Entries to the competition are already closed. Flower categories are indoor, sungrown light assist, sungrown and grand champion. “Sungrown” flower includes both outdoor and greenhouse, while “sungrown light assist” is defined as outdoor cannabis grown with supplemental lighting during the flowering stage. Indoor flower can be grown in any medium, and the grand champion category is a showdown between the other flower winners. The top prize is $1,000.

"I just knew that when the green
rush came to Oklahoma, that this is
exactly, what I wanted to do."
— Daniel Lewis tweet this

Edibles are judged by hard/soft candies, baked goods and specialties. Topicals containing THC have their own categories, while CBD also has its own flower category. Pre-rolls, including any method of added concentrates, are in a separate category.

The event comes a few months after the first Oklahoma High Times Cannabis Cup left a peculiar taste in many peoples’ mouths.

“We will hold a fair, clean and honest competition where every entrant will have the same opportunity to win regardless of status as a vendor or sponsor,” founder and CEO Daniel Lewis said. “We have also made entry into the competition less expensive than the laboratory tests they will receive. We want everyone to get involved. We are committed to providing a safe and welcoming environment for everyone to come out and have a great time celebrating the emerging cannabis culture in Oklahoma. The event will be ADA-accessible and include shuttles to and from many Stillwater hotels.”

Lewis got the idea after doing “grunt work” at Emerald Cup in California.

“I just knew that when the green rush came to Oklahoma, that this is exactly what I wanted to do. It’s not what you know; it’s who you know, and this puts me in a really unique position for everything cannabis-related,” he said. “Everybody said, ‘Well, you need to watch High Times and take notes,’ and I’m going, ‘No, I already had all those notes before they came. I knew it was going to be a mess just because they’re kind of disorganized and they run around, they go state to state, but I didn’t realize, I don’t think anybody anticipated the fallout that happened. I’m not here to bash them whatsoever. I was ready to go toe-to-toe with them because we have the outdoor growers. And I’m going, ‘Well, they’re here in August, so that’s all well and good. I hope you guys have fun, but at least I know I’ve still got the sungrown farmers and that’s going to be a lot of growers in Oklahoma, at least in the near future. I know indoor’s easy to get into and it’s nice and clean and it’s a controllable environment, but everybody knows that outdoor growing, you can’t touch it as far as profitability.’”

The judges for the competition sent out applications and were chosen. They will file their ballots electronically, and F.A.S.T. Laboratories is keeping the entries confidential during the judging process.

“Once I have those winners, I’ll call F.A.S.T. Labs and I’ll give them the numbers. F.A.S.T. Labs is going to make out my award ceremony cards, so my company won’t know until we pull that card out who won,” Lewis said.

His wife is quadriplegic, so accessibility and comfort is a priority for Cowboy Cup.

“We’ve been promising the whole time that we were going to be able to be ADA-accessible, and we wanted everybody to be comfortable,” he said. “Everything is in heated tents. We know we’re in December and, hell, it may be 55 degrees that day, and I hope to God it is because if it is, I’m going to open up the walls on the tent. But if it’s not, we’re going to be covered, and we understand this is a medical event and nobody understands ADA accessibility quite like I do. We just live with it, and so we were always going to be there and we always want everybody to be comfortable and having a good time and the vendors to feel like they got their money’s worth out of it.”

Advance general admission tickets are $45 and include an all-day pass Dec. 14. VIP passes are $110 and include entry to the vendor night Dec. 13, early admission Dec. 14, one free seminar and a swag bag. Attendees must be at least 18 years old. Tickets are $50 at the door. All VIP tickets must be purchased online.

“What the VIP does, it doesn’t really get you into any extra areas, but it gets you in on Friday, and so what we’ve kind of done is we’ve made Friday like the VIP vendor; anybody that’s got the money and pros that can pay will be there to have a good time and kind of mingle before the riot hits on Saturday,” Lewis said. “By doing that, all those people, all those VIP tickets, already have bracelets, and so when they get there on Saturday, half of the people are just going to walk in. There’s no waiting in line anymore to get scanned in, so I’m getting rid of half of the line right there.”