Canterbury Voices concludes its 48th season April 2 with Israel in Egypt, an oratorio by George Frideric Handel that tells the story of Moses starting with the Israelites’ bondage in Egypt.

It also features the plagues Moses called down upon Egypt, the parting of the Red Sea and other key biblical tale moments, all illustrated by “word painting,” in which the music is designed to depict the text.

“I hope that they will be blown away by the drama of it,” said Randi Von Ellefson, Canterbury Voices artistic director. “People have to remember this is before electronic devices and before technology. Handel is doing everything he possibly can to enhance the energy and the drama of the text.”

For example, at the line “he rebuked the Red Sea,” the orchestra drops out to demonstrate that the sea is now dry. Brass and tympani signal the arrival of hailstones and fire coming down from heaven.

“There really will be told a dramatic story that is very colorful and is really part of the Judeo-Christian tradition,” Von Ellefson said.

First performed in 1739, Israel in Egypt stands out as primarily a choral piece, with fewer arias for soloists than some of Handel’s other works. 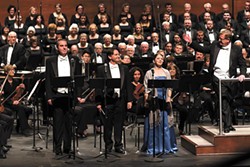 The chorus propels the plot forward, narrating the story and acting as a commentator.

Canterbury features all its local soloists in this performance and also features a bass duet that is frequently cut from most performances because, Von Ellefson said, many conductors don’t want to hire two bass soloists just for one piece. However, Canterbury already had two musicians it could call on, including one of its members and a student from Oklahoma City University (OCU), where Von Ellefson is choral activities director and a professor of music.

It also features a baroque instrument called a theorbo, a continuo instrument that resembles a guitar.

Canterbury starts planning its shows three to four years in advance. Von Ellefson said this show’s timing makes it relevant to many concertgoers, because it happens near the end of Lent and not long before Passover begins, appealing to both Jewish and Christian traditions.

Von Ellefson said the concert also is ideal for anyone who has said they’d like to hear more of the chorus in Canterbury’s shows. Israel in Egypt features choruses and double choruses, and with Canterbury singers being joined by members of the Oklahoma City Philharmonic and by two of OCU’s choirs, there are moments when 200 singers are performing together on stage.

“Visually and sonically, it will have a lot of impact, a lot of power,” Von Ellefson said.

While the other concerts in Canterbury’s season featured multiple works, Israel in Egypt represents its tradition of presenting a major oratorio. The group hasn’t presented the work in over 10 years, but Von Ellefson said he thinks it has a commitment to preserve great works from the Western tradition.

“I think we owe it to the history of great choral music to do some of these major works, not just a concert of a lot of different works by a lot of different artists and composers, but one full concert unified by a main theme and by a major composer,” Von Ellefson said.