Council on American-Islamic Relations is hosting its fifth annual Oklahoma Muslim Day at the Capitol to encourage civic engagement within the community. 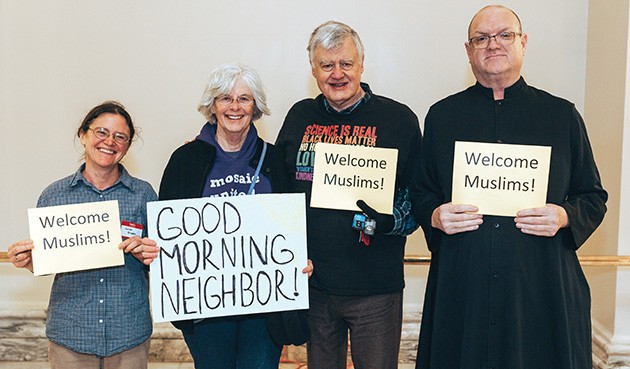 The Oklahoma chapter of Council on American-Islamic Relations (CAIR) has seen its annual Muslim Day at the Capitol event grow exponentially since 2015. What started as a somewhat basic introduction to the Capitol has grown into a full-blown day of action and advocacy.

Lani Habrock, CAIR government affairs director, said the group began the event because it wanted to educate members of the Muslim community, many of whom are first-generation immigrants with few examples of political engagement.

“In 2015, we had our first Muslim day at the Capitol, and that was met with some very strong opposition,” she said. “There were people with signs and yelling things, and it was very scary. But after that, the great thing that happened was the interfaith community reached out to us and they said, ‘How can we help you? Because this is your Capitol too.’ … So ever since 2015, the interfaith community has created what we call a ‘corridor of love.’”

When Muslim people arrive at the Capitol for the event, interfaith community members with their own signs of support welcome them and shield them from protesters.

The event itself has also evolved. In its first year, Habrock said it essentially boiled down to a tour of the building. CAIR has built on that every year since, and now Muslim Day at the Capitol focuses on legislative advocacy.

“We are going to have our 2019 legislative guide and agenda,” Habrock said. “Every year, we kind of pick core issue areas that are important to the Muslim community and really try to focus on those in addition to making sure that we watch civil rights issues and the rights of minorities.”

While there are no bills that deal with the Muslim community directly, Habrock said there are still things that affect them indirectly. One of those issues relates to the House’s opening prayer. Last year, Rep. Jason Dunnington, D-Oklahoma City, nominated a local imam and Oklahoma City University religion professor to lead the prayer.

“The House, they always open up their session with a prayer, and it’s always been somebody that’s nominated by House members. Last year, Rep. Dunnington nominated Imad Enchassi,” Habrock said. “A nomination has never been rejected before, but … they rejected it. And then they turned around and changed the rules, stating that a representative could not nominate a faith leader unless it was the leader of the house of worship that they personally attended, which is very exclusionary because all of our representatives pretty much are Christian. We don’t have a single Jewish representative or Muslim or Hindu.”

Rather than dealing with the issue, Habrock said a pastor was chosen to be the designated chaplain to lead the prayer.

“Relations have gotten a lot better at the Capitol.” — Lani Habrock tweet this

“We’re still trying to follow up with that because we haven’t gotten a lot of response from leadership,” she said. “That was supposed to be, from our understanding, a temporary fix, but we haven’t heard anything. So I think they’re just hoping that it goes away.”

Another issue the Muslim community deals with is a rise in harassment and discrimination. Habrock said statistics between 2015 and 2017 showed a 25 percent increase.

“The data for this year hasn’t come out, but we have seen personally, just in our Oklahoma office, a large rise in people calling our civil rights division with claims,” she said. “However, on the positive side of that, we have had a lot more positive experiences in resolving those issues.”

In the Legislature, CAIR is watching a bill on bullying and two bills regarding guns. House Bill 1068, introduced by Rep. Daniel Pae, R-Lawton, would amend the state definition of “bullying.”

“[The bill] modifies the state definition of bullying from having to be something that happens multiple times to just a single incident of harassment,” Habrock said. “So that bill passed committee, and we’re looking forward to it hopefully passing the floor as well as getting signed by the governor. We think it’s an important change for all Oklahoma students, including Muslim students.”

House Bill 2597 by Majority Leader Jon Echols, R-Oklahoma City, would allow anyone over the age of 21 without a felony or criminal record to carry a firearm without a permit, license or training. A similar bill passed the Legislature last year but was vetoed by former governor Mary Fallin. Gov. Kevin Stitt has said he will sign the bill if it reaches his desk.

“That’s the one that’s kind of a hot-button issue right now, but there’s another one that is very concerning to us,” Habrock said. “Senate Bill 38 permits concealed carry of firearms within the state Capitol building, and it’s only regulated to persons with a handgun license. … This is very concerning to us specifically because our Muslim Day at the Capitol has, in the past, been on the edge of becoming violent because of people so bigoted against Muslims.”

Over the years, Habrock said the relationship between the Muslim community and lawmakers has become increasingly positive. Former House Rep. John Bennett became known for calling Islam a “cancer” in society and for referring to local Muslim leaders as terrorists.

“Relations have gotten a lot better at the Capitol since then. What we’ve been doing is having meet-and-greets at mosques around the state,” Habrock said. “We invite all of the representatives and senators and some of the local public figures to come and meet their Muslim neighbors.”

One of the most exciting meet-and-greets, Habrock said, was just a few weeks ago in Stillwater.

“Every single representative that represented the Stillwater area that we invited all showed up. All of them except for one were Republican,” she said. “It’s been very exciting because we’ve always had a few allies that have always been representatives or senators that have had ties to the Muslim community … but we really wanted everybody to just recognize that they have Muslims in their districts and they’re constituents too.”

Habrock said some Muslim-unfriendly officials also termed out, did not run or lost their seat during recent elections.

“People that were kind of far to the right and to the left, those people were ousted and they were replaced by more moderates,” Habrock said. “So although the Republican Party has a supermajority in both chambers this year, we’re actually looking forward to seeing more progress because both sides seem more willing to talk with us and to build relationships.”

CAIR officials continue to push for recognition of the Muslim community and pass laws that benefit all Oklahomans. They have seen more confidence from community members in interacting with their government and getting involved.