Restaurante Los Artesanos might be humble, but it packs great care and flavor into a small space. 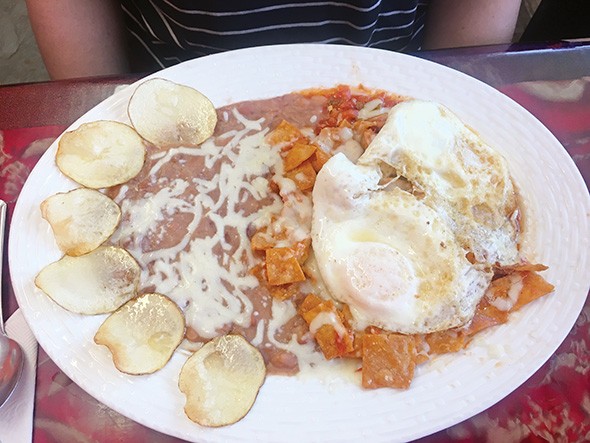 A common good review for a restaurant often says, “It’s so good that it tastes like grandma made it.” What if you were able to sit down in an intimate dining room where a pair of mothers painstakingly prepared your order from scratch?

You’re in luck at Restaurante Los Artesanos, 2701 S. Walker Ave., which is located in the Capitol Hill neighborhood, just south of the intersection at SW 25th Street. Driving south on Walker, you’ll see a small parking lot with about five or six spots, which is how many tabletops are available in the restaurant. Park on the side and walk to the entrance along Walker because the door next to the parking lot takes you to the kitchen.

What works: The cactus and pork gorditas are crispy and flavorful.
What needs work: The batter on the chile relleno is a little soggy.
Tip: Mexican Cokes are served in frozen, frosted mugs.

Open the front door, and the chime alerts a friendly waitress to get you seated at one of the restaurant’s six tables. It’s close quarters, but the environment is colorful and clean.

According to the restaurant’s Facebook page, the owners are from Guadalajara in the west-coast Mexican state of Jalisco, and the menu reflects those ties to the ocean with a healthy amount of seafood options mixed in with staples like quesadillas, tacos, burritos and enchiladas.

Los Artesanos offers spicy shrimp in chile sauce, a fish and shrimp soup, shrimp in garlic sauce, fried fish filet, ceviche and fried whole trout, the latter of which is served with the head on so the eye can judge you as your tear into its tasty flesh. All of the seafood options are a reasonable $11.99.

Another staple of Guadalajaran cuisine on the menu is the torta ahogada, which is a sandwich that is dunked or “drowned” in a red sauce that is typically made with chile de árbol. It’s filled with the meat of choice and served with a crispy taco as a side item. The regular torta on the menu comes with fries.

"Traditionally, a lot of gorditas are fried, but I like the fact that Los Artesanos grills them and keeps the caloric intake down." tweet this

The restaurant opens at 9 a.m. daily, except Tuesday when it is closed. Customers can order eggs in any dish or get them as huevos rancheros, scrambled with chorizo or ham or as you like. It’s not listed on the menu, but I’m sure it wouldn’t too much trouble to get eggs in a taco or burrito.

The full menu is offered all day, even if you drop in for a morning service, which surprised me when I stopped by for a cup of coffee and another one of the restaurant’s specialties: gorditas.

Nothing like the item with which you might be familiar from Tacos Bell, gorditas are offered from corn ($2) or flour ($2.50) dough. The pockets of masa are cooked on a flattop until they puff and then are cut open and stuffed with a choice of filling.

Traditionally, a lot of gorditas are fried, but I like the fact that Los Artesanos grills them and keeps the caloric intake down. It offers a variety of fillings, including bean and cheese, chicharrón, cactus with pork, potatoes with chorizo, asada with cilantro and onion, chicken, barbacoa, shredded chicharrón minced meat with potatoes, green peppers with cheese and pork cooked in red sauce.

I tried both the corn and flour varieties of gorditas. My favorite was the cactus with pork in a corn shell. The corn gordita is noticeably thinner than the flour and almost fully crispy. The flour one got a nice browned edge from the flattop but still had plenty of give to showcase a filling of almost creamy potatoes with chorizo. I tried the nopales (cactus) in the corn variety and loved the browned elements of the cactus that came from cooking it on the flattop. It was served in a red sauce with pork, and the consistency fondly reminded me of stewed tomatoes and okra, but with a lot more flavor and less of the slimy texture from the okra.

A meal at Los Artesanos begins with complementary chips and salsas. The red and green salsas are served warm. The green is heavy on jalapeño and the red has nice depth of flavor with tomato and chile de árbol taking turns with a solo in the opera’s opening act.

On a full meal dining in, I tried the chile relleno with chicken, and my wife ordered the chilaquiles topped with eggs. I liked that the entrees are served with delicately thin fried potatoes along the edge of the plate; I can’t say I’ve seen them in the city. The chicken stuffed inside the fried poblano was tender and juicy, but the batter was a little soggy. It seemed like the egg wash used to adhere the batter got scrambled as it cooked. I pulled aside the batter and added a few splashes of the salsa roja from the chips and was happy as a clam with the rest of the meal. It was served with four fresh flour tortillas, and I had a lot of fun taking the poblano and stuffing it with rice, beans and guacamole inside the tortilla.

The chilaquiles had a chunkier red sauce than what was served with the chips to open the meal, and it had some heat with a little natural sweetness from tomatoes. The eggs were cooked to medium with a runny yolk, and the fried tortillas still had plenty of crisp under the sauce.

Another fun element at Los Artesanos is that it serves bottles of Mexican Coke in a frozen, frosted mug and water comes with fresh fruit floating on top to infuse with more flavor. The restaurant operated as cash-only for quite some time, but it does take cards and is very amenable to English-only speakers.  It’s the little things like fresh fruit and potato slices that elevate Restaurante Los Artesanos from its peers in Capitol Hill to being one of the best family-run restaurants in the city.