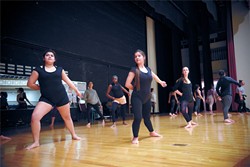 Jesus Medrano has always wanted to go to college. When he entered middle school, Medrano was encouraged to not only perform well in his academic classes but choose an elective to boost his college application. He signed up for the school’s band program and was handed an instrument case; inside, there was a trumpet.

To Medrano’s surprise, he not only took to the instrument, learning just how to make that bold and brassy sound, but enjoyed the time he spent in rehearsals with fellow students. When he completed eighth grade, Medrano made the decision to apply for Capitol Hill High School’s Academy of Fine Arts, the state’s only fine arts academy connected with the National Academy Foundation. In its third year, the academy draws a diverse group of talented student musicians, actors, dancers, vocalists, visual artists, creative writers and even aspiring filmmakers and fashion designers. Through the four-year program, students split their time at the southside high school between core academic classes and curriculum designed around their arts discipline or technique.

“Being in the academy has really opened my mind to a lot more things than just band, but the arts in general,” said Medrano, who is now learning percussion instruments as well as honing his trumpet craft.

In the academy’s geography course, Medrano completed a research project on Germany for which he performed a German folk song on his trumpet in his final presentation.

Medrano has no doubt that he will. In addition to his coursework and involvement in the school’s marching band, he is required as an academy student to complete 100 hours of community service and 120 hours in a paid arts internship to graduate. Those requirements don’t give the teenager pause; instead, they encourage him to look forward to what’s ahead.

Oklahoma City Public Schools launched Capitol Hill’s Academy of Fine Arts in fall 2015. The academy, certified by the National Academy Foundation, joined a handful of other career academies offered at the district’s high schools. Designed as learning communities around a subject area, like health sciences, engineering, finance or entrepreneurship, career academies put students on a pathway from high school to further education and the workplace.

It was no small task for the district to create the arts academy, explained Erika Reyes, who served as its site coordinator. Capitol Hill’s arts programs, which ranged from visual to performing arts, served as the foundation, but teachers worked to recruit local professionals to serve on the advisory board, built relationships with community partners for student community service and internship opportunities and designed a four-year curriculum in nearly a dozen disciplines. Each academic year, the academy hosts around six major performances, which includes winter and spring concerts and drama productions.

“We wanted to build this academy into something where kids were held accountable and followed the curriculum for four years, becoming more prepared for higher education in their disciplines or not,” said Tristianne Asbury, one of the academy’s directors who teaches studios in the disciplines of band, drumline and piano.

By design, the district’s career academies serve as a springboard to the professional world. So far, arts academy students have completed internships at local dance studios, yoga studios and businesses. The district’s academies also hold strong graduation and college acceptance rates. The arts academy is on track to follow district trends, its leaders said.

Reyes, who is the head dance director, beamed with pride when she shared that each of the 14 dance seniors applied to college and many face auditions for acceptance into dance programs in the coming weeks. In May, half of those students will wear white robes at graduation to signify their high grade-point average.

“As freshmen, they begin with an elective academy class and a technique (discipline) class,” Reyes said. “By the time they are seniors, they are in their fourth technique class. For dancers, they must complete a senior capstone, which is to choreograph a piece on their own. It gets more and more challenging as they grow, but it prepares them.”

Angelica Herrera, a senior at the arts academy and Capitol Hill’s Academy of Engineering, has completed two internships, one with Antioch Energy and a second with Everything Goes Dance Studio. Both internships taught her real-life skills, like how to be patient when working with preschool children in a dance class.

“For my future career, I want to be an engineer, but I love dancing,” said Herrera, who specializes in jazz dance and was accepted at Oklahoma State University to study architectural engineering. “I hope I keep doing it whether as a hobby or coming back to Capitol Hill to help out.” 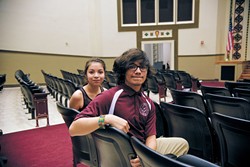 As the school’s Dance Diversity Company practiced on the school’s auditorium stage, dance teachers Reyes and Cameelah Pennington discussed how the academy’s teachers infuse culture into lessons. At Capitol Hill, 72 percent of the school’s population is Hispanic. In the dance program, it’s not usual to see students strike flamenco dance moves. In the band room, one might hear the sounds of “Como Te Voy A Olvidar.”

“We stay true to our roots,” Reyes said. “Our kids are able to express themselves.”

The academy’s juniors, through their event planning course, present Dare to Dream, a showcase of the students’ talents, 6 p.m. Feb. 8 in the school’s auditorium. Since August, the students have learned the ins and outs of producing a performance or show, learning about production, design, marketing and more.

Currently, there are 143 students enrolled in the art academy.

There are signs that the program is reaching its goal of serving students and providing them opportunities to advance in the arts and be connected to the local community. Academy students are a familiar sight at events like Fiestas de las Americas, Día del Niño (Children’s Day Festival) and the groundbreaking of Oklahoma Contemporary Arts Center in Automobile Alley.

This fall, Asbury held a meeting for parents of juniors in the academy, and parents filled up every seat in the classroom. Questions centered on how to support their children through the program. Last week, Reyes met with a Midwest City parent about their eighth-grade daughter joining the dance program next fall. The meeting ended with the parent completing the academy’s application.

“We are on a whole new level of arts education,” Reyes said. “We’ve come so far. These kids are getting experiences that they will never forget.”

Print headline: Take a bow; Capitol Hill High’s Academy of Fine Arts provides unique opportunities for performing and visual arts students who want to hone their craft and take it to the next level.